This poetry collections focuses on a hybridized Indigiqueer Trickster character named Zoa who brings together the organic (the protozoan) and the technologic (the binaric) in order to re-beautify and re-member queer Indigeneity. This Trickster is a Two-Spirit / Indigiqueer invention ... Read more

This poetry collections focuses on a hybridized Indigiqueer Trickster character named Zoa who brings together the organic (the protozoan) and the technologic (the binaric) in order to re-beautify and re-member queer Indigeneity. This Trickster is a Two-Spirit / Indigiqueer invention that resurges in the apocalypse to haunt, atrophy, and to reclaim. Following oral tradition (à la Iktomi, Nanaboozho, Wovoka), Zoa infects, invades, and becomes a virus to canonical and popular works in order to re-centre Two-Spirit livelihoods. They dazzlingly and fiercely take on the likes of Edmund Spenser, Shakespeare, Charles Dickens, and John Milton while also not forgetting contemporary pop culture figures such as Lana Del Rey, Grindr, and Peter Pan. Zoa world-builds a fourth-dimension, lives in the cyber space, and survives in NDN-time – they have learned to sing the skin back onto their bodies and remain #woke at the end of the world. “Do not read me as a vanished ndn,” they ask, “read me as a ghastly one. ”

full-metal indigiqueer is influenced by the works of Jordan Abel, Tanya Tagaq, Daniel Heath Justice, Claudia Rankine, Vivek Shraya, Qwo-Li Driskill, Leanne Simpson, Kent Monkman, and Donna Haraway. It is a project of resurgence for Two-Spirit / Indigiqueer folk who have been ghosted in policy, page, tradition, and hi/story – the very lives of Two-Spirit / Indigiqueer youth are rarely mentioned (and even dispossessed in our very mandates for reconciliation), our lives are precarious but they too are precious. We find ourselves made spectral in settler and neocolonial Indigenous nationalisms – if reconciliation is a means of “burying the hatchet,” Zoa seeks to unearth the bones buried with those hatched scalps and perform a séance to ghost dance Indigiqueerness into existence. Zoa world-destroys in order to world-build a new space – they care little for reconciliation but rather aim to reterroritorialize space in literature, pop culture, and oral storytelling. This project follows in the tradition of the aforementioned authors who, Whitehead believes, utilize deconstruction as a means of decolonization. This is a sex-positive project that tirelessly works to create coalition between those who have, as Haraway once noted, “been injured, profoundly. ” Zoa stands in solidarity with all qpoc folk who exist as ghosts with intergenerational and colonial phantom pains – they sing with Donna Summer, RuPaul, Effie White, and Trixie Mattel. The space made is a post-apocalyptic hub of sex and decolonization – a world where making love is akin to making live.

Joshua Whitehead is an Oji-Cree, Two-Spirit storyteller and academic from Peguis First Nation on Treaty 1 territory in Manitoba. He is currently working towards a Ph.D. in Indigenous Literatures and Cultures at the University of Calgary on Treaty 7 territory. In 2016, his poem “mihkokwaniy” won Canada’s History Award for Aboriginal Arts and Stories (for writers 19–29) and includes a residency at the Banff Centre. He has been published widely in Canadian literary magazines such as Prairie Fire, EVENT, Arc Poetry Magazine, CV2, Red Rising Magazine, and Geez Magazine’s Decolonization issue. He is currently working on a non-fiction, critical manifesto and a young adult novel titled Jonny Appleseed, based on a short story that first appeared in the Malahat Review’s January 2017 Indigenous Perspectives issue. You may follow him on Twitter @concrete_poet.

“These poems do not simply deconstruct language and knowledge; they create an opportunity for readers to create new knowledges, new definitions of self and community, and to ‘sing the skin back to [their] bones’ … This collection will be of interest to readers and scholars actively seeking a collection of poetry that forges new modes of understanding and expression and that relentlessly and unapologetically builds towards an Indigenous future. These are poems of affirmation, resilience, and resistance. ”
—Francisco Delgado, Transmotion

“A spirited collection [… that] shifts and spins, smashing preconceptions from within and without his immediate vicinity. … This is an impressive work, and a writer very much worth paying attention to. ”
—rob mclennan

“Joshua Whitehead has crafted a radical cyber poetic that breaks the boundaries between paper and screen, between the visual and the written word, and between the past and the future. Full-Metal Indigiqueer is an Indigital queer manifesto that clears the paths ahead. ”
—Qwo-Li Driskill, author of Walking with Ghosts: Poems

“Both the form and content of the poems throughout Full-Metal Indigiqueer slice through barriers imposed by the conventions of language, to assert a new kind of identity for Whitehead, as the poet struggles and fights against the social, literary, and individual colonizations that he lives with/in. … Whitehead displays a clear love for the possibilities of written language, despite his misgivings about how it has come to be a part of his life through the colonial process. The creative use of text and language throughout this collection suggests that creative use of language can become a bold way through the traps set up to confine speakers to sanctioned ways of expressing themselves. ”
—Wes Babcock, Bywords

"Joshua Whitehead is badass, with language like twin-pistols and impeccable aim. If you haven’t read this book yet, you need to correct that and give this collection however long it takes for you to read it cover to cover. "
—Megan Black, CITR Intimate Reviews 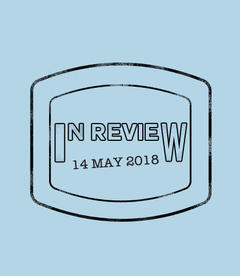 In Review: The Week of May 14th

This week we learned the word "crossip," rolled some short story dice, imagined what superheroes would read, and more.

Other titles by Joshua Whitehead