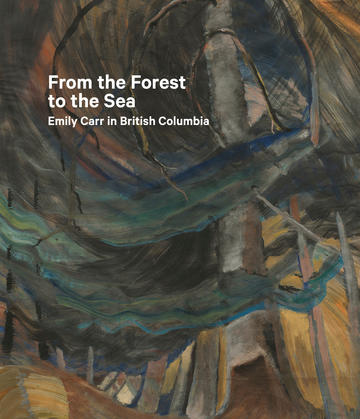 From the Forest to the Sea

From the Forest to the Sea

Emily Carr captures the natural and cultural landscapes of British Columbia like no other artist before or after her.

This major volume, designed to accompany an exhibition organized by the ... Read more

Emily Carr captures the natural and cultural landscapes of British Columbia like no other artist before or after her.

This major volume, designed to accompany an exhibition organized by the Dulwich Picture Gallery in London and the Art Gallery of Ontario in Toronto, gathers work from all phases of this extraordinary artist's career — from her delicate early watercolours of the 1890s to her expressive hybrids of the 1930s and 1940s, which carry European and North American Modernist traditions with the formal stylizations of Indigenous design.

Carr's lifelong fascination with British Columbia's original inhabitants transformed her. Visiting First Nations villages up and down the coast, she absorbed the essence of the place she loved so well. Those experiences changed her life and charged her work, inspiring her imagination.

This monumental volume features more than 100 colour reproductions of Carr's work, including some of her most renowned paintings, in dialogue with dozens of indigenous artifacts from the Pacific Northwest: historic masks, baskets, and ceremonial objects by Haida, Kwakwaka'wakw, Nuu-chah-nulth, Salish, Tlingit, and Tsimshian makers. Drawn from public and private collections, including the British Museum, the Pitt Rivers Museum, Horniman Museum and Gardens, and the Museum of Anthropology at the University of British Columbia, these artifacts illuminate Carr's connections to Indigenous cultures.

Sarah Milroy is Chief Curator at the McMichael Canadian Art Collection. A highly respected art critic and exhibition curator, she has contributed to more than a dozen books on art, including Mary Pratt, From the Forest to the Sea: Emily Carr in British Columbia, and David Milne: Modern Painting.

Ian A.C. Dejardin is an art historian and director of the Dulwich Picture Gallery in Dulwich, southeast London, England. He succeeded Desmond Shawe-Taylor as director in 2005 and was previously a chief curator at the gallery from 1998.

"This is an indispensable guide and provides enrichment to both the neophyte and stalwart Carr researcher. [Carr’s] inexpressible exuberance and free-flowing imagination are given colour and her sensibility heightened in these pages. "

"This dynamic book moves confidently between Carr’s wonderful work and the First Nations culture that inspired her. "

"While there is no doubt that Emily Carr herself is the subject of From the Forest to the Sea: Emily Carr in British Columbia, the curators have taken considerable care to acquire the Native perspective on Carr’s work. "

Other titles by Sarah Milroy

Other titles by Ian Dejardin