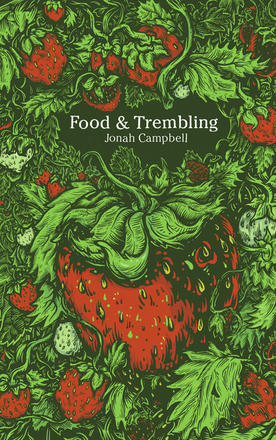 What hidden evasions and exclusions lie behind the subtle perfection of the BLT? What is the etymology of the croissant? Why did we drink all that Bud Lite Lime? What did you do to my face?  This collection of writing by Jonah Campbell—metalhead, misanthrope, unrepentant ... Read more

What hidden evasions and exclusions lie behind the subtle perfection of the BLT? What is the etymology of the croissant? Why did we drink all that Bud Lite Lime? What did you do to my face?  This collection of writing by Jonah Campbell—metalhead, misanthrope, unrepentant good eater—explores the both the finest and most furtive of culinary pleasures. Food & Trembling approaches eating not with a four-figure expense account, but a rare insight and fierce appetite for the pleasures of the table. Also chips. Too many chips.

Jonah Campbell lives in Montreal, QC. He divides his time between food, drink, and research with the Social Studies of Medicine unit at McGill University. He also pours wine. His work has appeared in the National Post, Harper's, VICE, and Cult MTL. He is the author of Eaten Back To Life and Food and Trembling .

I could perhaps trace this dislike of brunch back to my adolescent years of principled/practical miserliness, an outright antagonism toward restaurants, and the veganism that reduced every brunch menu to plain toast or fried potatoes. I certainly shut myself out at an early age from the social pleasures of brunch that many folks have by now had many years to fashion into a emotional investment in brunch as a ritual; so, sour grapes? Maybe. I recall as a child going to a hotel brunch with my father, brother, and grandmother and being astonished to enter this enchanted, improbable realm where one was permitted to have, in abundance, waffles covered in syrupy strawberries, chocolate, and whipped cream without having to consume even a single vegetable by way of gaining entry, but I don’t think that I ever had the presence of mind to catalogue that as a first experience of “brunch,” as opposed to “buffet” and those excesses it inevitably encourages.

This book is the Fear and Loathing of food writing;thoughtful, vulgar, and hard to describe, but it is neverBoring.

Food & Trembling, Jonah Campbell’s collection of humorous essays on the serious subjects of food and eating, are not your usual foodie fare. Campbell begins with a discussion of the BLT and ranges through pizza, Evelyn Waugh’s Noonday Reviver, mushrooms, boiling vs. roasting, the relationship between farinata and socca, mushrooms again, Doritos, eating weird things, gin caesars, brunch and Christmas dinners, as well as swoops and veers into history, literature and etymology (“Killcrop, noun an insatiate brat, popularly thought to be a fairy that has been substituted for the original child”). Campbell’s writing is undisciplined and occasionally out of control, but his manic energy and wide-ranging curiosity more than make up for it.

Other titles by Jonah Campbell