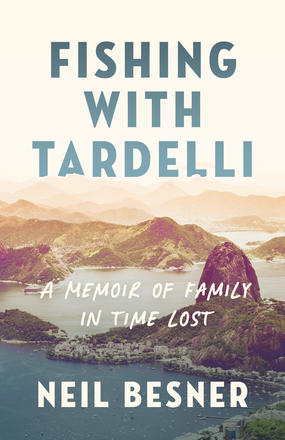 A literary meditation on memory, time, love, and loss

Fishing With Tardelli contemplates the relations among four parents — mother, father, stepfather, and a Brazilian fishing companion — and the author. Over marriages and remarriages, fathers and mothers become stepfathers ... Read more

A literary meditation on memory, time, love, and loss

Beginning with an older man’s recollections of himself as a young teenager fishing with Tardelli in the bay in Rio de Janeiro, the memoir reflects on time lost and time regained. The narration ranges across the mid-’40s in Montreal, where two couples marry, divorce, and remarry in a new configuration; proceeds to Rio de Janeiro in the mid-’50s, when one of these newly formed families emigrates; and returns to Montreal in the late ’60s and early ’70s. After a 50-year interlude, Besner returns from Western Canada to the pandemic moment in Toronto.

Neil Besner divides his time between Toronto and Lake of the Woods. He was born in Montreal and grew up in Rio de Janeiro. He is fluent in Portuguese and returns to Brazil frequently to teach at Brazilian universities. He taught Canadian literature at the University of Winnipeg for 30 years.

In the early fall of 1956, the first day of the new school year, I was told by my first-grade teacher in Montreal that we would be moving to Brazil. That evening, sitting with my mother in the kitchen in our apartment on Sherbrooke Street, my older brother Derek and I learned that in Brazil we were going to have to drink bottled water. We were not to drink from the taps, we could get typhoid. Often, late at night in our apartment in Copacabana, more truly thirsty than truly frightened, I did, and survived. In that early era in Brazil I would awaken each night for several weeks and look at the small and ominous helicopter that had, somehow, landed in our bedroom in the dark, and was poised, motionless but menacing, on a chair a few feet from my bed, and I was afraid.

It was in those years that Walter – before he became Senhor Valter, not to be gainsayed — began to decree his bedrock if unarticulated belief, his unpronounced sine qua non, that we suddenly became one large and happy family. North and South. A belief in place of anyone’s memory, including his own.

But memory will persist in weaving other stories.

What story led from the mid-forties to the mid-fifties?

In one enduring form, it remains their love story.

Or, it was my mother’s story, alluding, darkly, to my father’s gambling addiction. That was the wedge. Senhor Valter was either silent, or allowed that in those years, my mother was pursued by “half of Montreal. ” Which made him the victor.

My father never said a word to anyone. He had no story to tell. He did tell me several times, when I was in my early twenties, of the six months he had spent living with his parents in their house on Elm Avenue (pronounced in his generation as Ellum Avenue) at one unidentified time in his adult life. He told me he hadn’t wanted to leave the house. It took me decades to understand his Morse Code, to understand that he had retreated from the world when he was left.

There were other stories from the mid to late forties. One recounted a note on a windshield on Sherbrooke Street, advising the wronged Judith that her husband was at that moment in a nearby hotel room with the other Judith.

None of these accounts stood up. All of them stood up.

In one telling, it is their love story. I have labored but failed to apprehend it from the real love letters they wrote each other, sequestered by Dona Judite in Rio, in an old worn blue suitcase I discovered in her condo there a year before she died in 2003. I have further assembled the love story from a black and white photograph that I stole then from that suitcase, of Senhor Valter and Dona Judite at a rooftop restaurant in Montreal, named and dated on the back in blue ink, in my mother’s immaculately regular handwriting: The Normandie Roof, May 1944. Before their marriages to others.

“Neil Besner’s memoir Fishing With Tardelli is a meditation on family, memory, and time ‘lost. ’ It recovers that ‘lost’ time brilliantly in sharply chiselled vignettes rendered in dazzling, evocative prose. The memoir evokes the darting movement of memory itself in swift, glittering leaps of association that light up the writer’s life, his quirky family, and Tardelli, the mythic Brazilian fisherman whose presence still hovers over Besner’s life. This is an extraordinary book, loving, honest, wise. ” — Guy Vanderhaeghe

“In this haunting memoir, by turns lyrical, celebratory, and anguished, Neil Besner navigates the rivers and tributaries of what can and what cannot be said in his attempt to recover time and fathom the unknowable — of family, of growing up, of the strangeness of the world. ” — Brian Henderson, author of Nerve Language, Sharawadji, Unidentified Poetic Object, and Unfinishing

“A sinuous search through time that circles the author’s greatest affections — mothers, the sea, literature, language, women. And always the search returns to his first love, Tardelli, the man who taught the boy how to fish and how to live. Beautiful. ” — David Bergen, author of Out of Mind

“Neil Besner’s poignant and brilliantly observed memoir tells the extraordinary story of a young man growing up with love and loyalties split between two cities, Montreal and Rio de Janeiro, and two families, his birth mother and stepfather in Brazil, and his birth father and stepmother in Canada. That story is enriched by an overarching surrogate father, the earthy Brazilian fisherman Tardelli. Written with malice toward none and charity for all, Fishing With Tardelli will linger in your memory. ” — Thomas Travisano, author of Love Unknown: The Life and Worlds of Elizabeth Bishop

“Returning again and again to the simple joy of boyhood days spent catching bluefish with handline in the bay outside of Rio, Neil Besner’s memoir immerses us in the nature of time, memory, family, and the dark waters of loss. Besner leads us through scenes from his two homes, Canada and Brazil, in a search for meaning and connection. A truly great read. ” — Catherine Hunter, author of After Light and St. Boniface Elegies