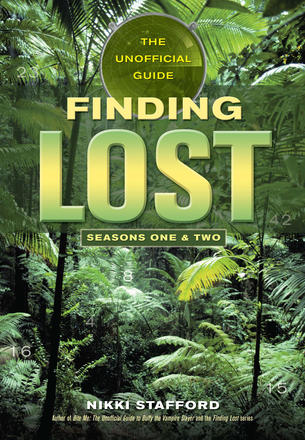 The first book in the critically acclaimed, bestselling Finding Lost series brings you an analysis of seasons 1 and 2 in one volume.

If you’re feeling as lost as the castaways on the show, Finding Lost is the crucial companion guide to help you unravel the mysteries of the ... Read more

The first book in the critically acclaimed, bestselling Finding Lost series brings you an analysis of seasons 1 and 2 in one volume.

If you’re feeling as lost as the castaways on the show, Finding Lost is the crucial companion guide to help you unravel the mysteries of the island. This is the only book that offers an episode-by-episode guide to the first two seasons of Lost, following the developments of the characters, the plots, and the various connections fans must make to keep up. Finding Lost includes:

Full of exclusive photos and enough background to put you leagues ahead of other viewers, this book will finally help you “find” Lost.

“Pilot, Part 1,” like the series in general, is about fear. There are few things more frightening than being utterly lost in a foreign place among strangers, unsure if you’ll be able to survive. But J. J. Abrams & Co. aren’t satisfied with just a tiny thing like a plane crash on a deserted island; they throw in wild animals, mysterious voices … and a tree-crushin’, banshee-howlin’, people-evisceratin’ monster to boot. And that’s just in the first episode. The pilot of the plane tells everyone that they’re so off course that any search-and-rescue team is looking for them in the wrong place, eliminating all hope of someone coming to their aid quickly, and it’s that moment when the fear sets in for all of them. As Jack tells Kate when he first meets her, the trick is to conquer that fear and not let it overtake you. This comment will become integral to the overall plot of the show, especially in season 2.

Jack is immediately set up as the alpha male. Matthew Fox plays this character as a somber, damaged person who doesn’t want to be the leader, but once the burden is bestowed upon him he becomes The Boss. The series’ first shot is of him, his is the first flashback we see (when we see what happens on the plane for the first time), and he gets more lines than anyone else on the show. Later, Locke and Sayid will also step in as leaders of the group, but for now, it’s all Jack. We see him as a man with incredible self-control (his story of his first surgery where he only “allowed” himself to be scared for five seconds establishes his Type A personality), but he’ll soon discover that controlling everyone around him might not be as easy.

The rest of the characters remain vague. Kate looks like she could be a girly-girl, but within seconds of being introduced to the audience, we realize she just wants to be one of the guys, and will try desperately to prove that she can succeed as one. Charlie is a friendly but self-deprecating British former rock star; Locke is a mysterious man who might be a little bit insane; Boone is a guy who’s willing to help out everyone, but he’s a little dense; Shannon is a snotty princess whose most useful contribution to the group is lending her sunblock; Jin keeps his wife Sun on a short leash, and doesn’t want anything to do with the others; Hurley is a puppy dog whose presence makes others feel safe. Of course, first impressions are deceiving, and by the very next episode, almost all of these assumptions we’ve made about the characters will turn out to be completely wrong. Vincent, the golden Lab, is the second “character” we see after Jack, and as long as he is with Walt, Walt is safe; but whenever Vincent leaves him, Walt is in danger. Dogs have always been a symbol of protection and loyalty, and it is believed they have a sixth sense, and can detect danger before it occurs (dogs have been known to become anxious about their owners moments before their owners suffer a heart attack). Dogs are guides, and Native American beliefs state that when a dog appears, you should follow it and he’ll lead you to safety. Vincent appears to Jack but Jack doesn’t follow. Vincent will continue to pop up at integral moments, but we’ll later discover he isn’t the only character who can detect something before it happens (see page 321).

As with every episode of the series, viewers will walk away with more questions than answers. “Pilot, Part 1” is more of an establishing episode than one that will generate questions, but they’re still there. The biggest question being, of course, what the heck is that monster? Throughout this season and the next, we’ll be privy to various theories from castaways and other people, but for now, it’s a menacing, terrifying beast. Yet, for all its fear-inducing rage, it’s nothing compared to what else awaits these people.