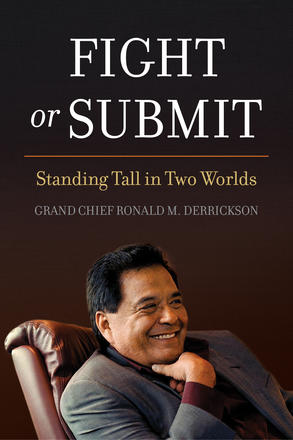 From the award-winning author of Unsettling Canada: A National Wake-Up Call and The Reconciliation Manifesto: Recovering the Land, Rebuilding the Economy comes an inspiring memoir of poverty, hard work, and incredible business success.

In the opening to his memoir, Grand Chief ... Read more

From the award-winning author of Unsettling Canada: A National Wake-Up Call and The Reconciliation Manifesto: Recovering the Land, Rebuilding the Economy comes an inspiring memoir of poverty, hard work, and incredible business success.

In the opening to his memoir, Grand Chief Ron Derrickson says his “story is not a litany of complaints but a list of battles” that he has fought. And he promises he will not be overly pious in his telling of them. “As a businessman,” he writes, “I like to give the straight goods. ”

In Fight or Submit, Derrickson delivers on his promise and it turns out he has a hell of a story to tell. Born and raised in a tarpaper shack, he went on to become one of the most successful Indigenous businessmen in Canada. As a political leader, he served as Chief of the Westbank First Nation for a dozen years and was made a Grand Chief by the Union of British Columbia Indian Chiefs.

He has been the target of a full Royal Commission and an assassination attempt by a hitman hired by local whites. As Chief, he increased his community’s revenues by 3500% and led his people into a war in the forest over logging rights. This is the determined and direct story of an Indigenous entrepreneur who, in the face of hatred and violence, always lifted his community up and had fun along the way.

Grand Chief Ronald M. Derrickson is one of the most successful Indigenous entrepreneurs in Canada. He also served as Chief of the Westbank First Nation for a dozen years and led his community from poverty to prosperity while surviving an assassination attempt and a Royal Commission on his business and political activities. He lives in Westbank First Nation, close to Kelowna, B.C.

The flight from Kyiv, where I have business interests, to my community in the interior of British Columbia is close to 12,000 kilometres. With stops in Amsterdam and Calgary, it takes 26 hours from the time my driver, Volodya, picks me up at my flat near Bessarabska Square to when I arrive at my Westbank office in the B. C. Interior. It is a flight I take back and forth several times a year, often after months-long stays. But each time I arrive on the last leg of the trip from Calgary to Kelowna, I feel a surge of energy as we pass over the towering peaks of the outer Rockies and begin our descent onto the Interior plateau, where my Okanagan people have lived since time immemorial. My Indigenous territory is part of me. It belongs to me and I belong to it. Or rather, what’s left of it.

My company CEO, Cathy Hellyer, who started working with me more than 30 years ago, or Tara Trottier, director of operations, who has also been with me for more than 25 years, meet me at the Kelowna airport. On the ride into this city of 132,000 people, they fill me in on the latest business developments. They are both smart, no-nonsense women who also have a great sense of humour, and they are a large part of the success of the RMD Group, the holding company for my commercial and residential real estate and other business ventures.

The airport is on the other end of town, so while we chat, we pass through the heart of the city, where my great-grandfather once owned a major part of the downtown area before he was cheated out of it by locals working with a corrupt magistrate.

The Westbank Reserve is on the west side of the William R. Bennett Bridge spanning the narrow section of Lake Okanagan. It is one of a few tiny pieces of the once vast Okanagan territory that remains under our control. I was born and grew up in a shack without plumbing or electricity on the hills overlooking the lake. My earliest memories are of kneeling in the field, gathering vegetables alongside my mother. And, when I was older, riding our horses along the ridge with my brother Noll. As a young man, I ranched these lands and for more than a dozen years, in the 1970s and 1980s and again at the turn of the century, I was chief of the Westbank First Nation.

Both sides of the road cutting through the reserve are now crowded with stores and businesses on leased reserve lands in deals I negotiated to bring income into what was once the poorest reserve in Canada. During my first 10 years as chief, I increased the band’s leasing revenues by more than 3,500 percent. I fought for every advantage for my people so we could have the economic development we needed to give a future to our children. But I always fought for more than that. I fought and I continue to fight for the land and the resources on our greater Okanagan territory, which encompasses thousands of square kilometres in the B. C. Interior.

“Grand Chief Ronald M. Derrickson has captured a vivid and arresting account of the challenges he confronted and surmounted as an Indigenous leader in a society dominated by racism. Providing insightful commentary on Indigenous politics and the various communal and interpersonal conflicts that he encountered as Chief of West Bank First Nation, Grand Chief Derrickson’s tenacity, resourcefulness, and inner drive for justice shines through. ” — Grand Chief Stewart Phillip, President, Union of B. C. Indian Chiefs