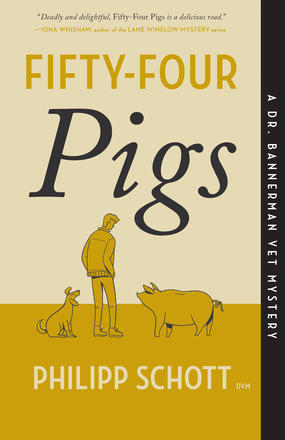 A swine barn explodes near a lakeside town, putting veterinarian Dr. Peter Bannerman on a collision course with murder and a startling conspiracy.

Peter is an odd duck, obsessed with logic and measurable facts, an obsession he puts to good use in his veterinary practice. When a murder is connected to the swine barn explosion and his friend Tom becomes the prime suspect, Peter feels compelled to put his reasoning skills, and his dog Pippin’s remarkable nose, to use to help clear him.

The situation darkens with a second murder and a series of break-ins, including at Peter’s house and clinic, but Peter has a hard time knowing when he is out of his depth, despite warnings from his brother-in-law Kevin, an RCMP officer.

Ultimately Peter finds himself out in the middle of a frozen lake during a blizzard, fighting for his life and confronting a horrifying realization he had been blind to all along.

Bestselling author of The Accidental Veterinarian and The Willow Wren, Philipp Schott was born in Germany but grew up in Saskatoon. He studied veterinary medicine at the University of Saskatchewan before moving to Winnipeg, where he is now chief of staff at a large pet hospital. He lives with his wife, two teenagers, three cats, and one dog in a creaky old house on the river.

“I’m over here!” Peter shouted back and began walking towards the yard.

Kevin met him at the edge of the aspen bluff. His already often red-tinged face was crimson, and his brows were set low over his narrowed eyes.

“What. The. Hell. Pete?!” He spat out each word as if it were an entire sentence on its own. “What the hell are you doing out here?!”

Peter tried to smile, although he knew it looked fake. “I’m sorry Kevin, I know I shouldn’t have. I just had a hunch about maybe some of the pigs having escaped and thought I’d bring Pippin out to help me look. ”

Kevin stared at him, not showing any change in the level of anger on his face.

“I didn’t touch any evidence or any part of the barn,” Peter added hastily. He would ask himself afterwards why he didn’t simply explain about the scent training and the piece of paper, but somehow it was easier to lie in the moment.

“Escaped pigs? Like from two weeks ago? In the middle of winter? With nobody having reported seeing any frozen hogs anywhere? What the frig are you talking about Pete?”

“I guess when you put it like that it sounds pretty stupid, but I just thought there might be a small chance…”

Kevin cut him off, “And so what if? What if this lame ass theory is right? So what? One effing pig gets out and effing freezes in the woods here. How does that effing help anyone or justify effing coming onto an effing crime scene that is still under active investigation!” He was screaming at Peter now. Pippin moved quietly to stand between the brothers-in-law and looked up warily at Kevin.

“Sorry. It was dumb. I’m really sorry. ” Peter tried to sound as contrite as he could. Contrition was not his natural state. His instinct was to doggedly argue each and every point until the other person either conceded or changed the subject in exasperation. But sometimes he managed to recognize in time that that was a bad idea. This was one of those times.

“Dumb is a big frigging understatement. ” Kevin’s tone had softened ever so slightly. “I should charge you, I really should. This Sherlock crap has got to stop. One more time and I swear I will. And I bet Laura would back me up. ”

“Just get out of here. ” Kevin had stopped screaming and now sounded more tired than angry. This was not the first time Peter had been chewed out by Kevin like that. Kevin was quick to anger, but also quick to calm down. Nonetheless, with each such encounter Peter felt that the ice was growing thinner beneath him.

“A charming mystery, the first in a series featuring Peter Bannerman, an amiable, introverted, tea-drinking, obsessive vet, who converses more with his dog, Pippin, than with his wife, Laura, or anyone else … James Herriot fans will want to check out this one. ” — Publishers Weekly

“Original, well-constructed, with a cast of interesting characters — I hope this isn’t the last we’ll read about Dr. Peter Bannerman and Pippin. ” — Ian Hamilton, author of the Ava Lee series

“With Dr. Peter Bannerman, Philipp Schott has created a unique brand of amateur detective, one who is as amiable as he is enigmatic, as inquisitive and old-timey as Sherlock Holmes, yet thoroughly modern, and believes that detective work and veterinary medicine are a perfectly logical pairing. The reader can’t help but be entranced and embraced by Schott’s charming and saucily unusual first book in what should be a long-running series. ” — Anthony Bidulka, author of the Russell Quant Mystery series

“Meet a very welcome addition to Canada’s fictional crime-busters; amateur sleuth Peter Bannerman, beloved veterinarian and tea connoisseur, with his clever sniffer-dog associate, Pippin. Philipp Schott’s small town Manitoba characters are wonderfully engaging and entertaining, and his writing is almost as Nordic as the town, spare, humorous and gripping by turns. Deadly and delightful, Fifty-Four Pigs is a delicious read with some of the most beautiful descriptions of a prairie winter anywhere. ” — Iona Whishaw, author of the Lane Winslow Mystery series

“So compelling and it is clear that Schott is setting us up for what could be a most satisfying series. Bring on book two!” — First Clue newsletter

Other titles by Philipp Schott, DVM