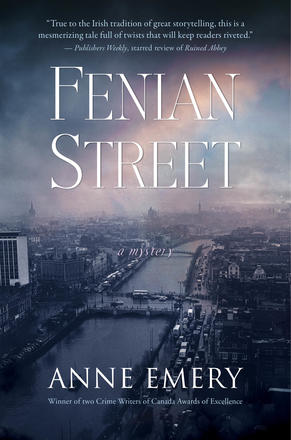 Shay Rynne grew up in the Corporation Flats — public housing — in Fenian Street, Dublin. He has always toyed with the idea of joining the Garda Síochána, ... Read more

Shay Rynne grew up in the Corporation Flats — public housing — in Fenian Street, Dublin. He has always toyed with the idea of joining the Garda Síochána, the Irish police. But in the early 1970s, young fellows from the tenements of Dublin have not been welcomed in the police force. When his friend Rosaleen is killed and the case goes unsolved, Shay decides to put on the uniform of a Dublin garda and sets out to find the killer.

The murder inquiry makes an enemy of the detective who failed in the first investigation. Shay knows Detective McCreevy is just waiting for the chance to get revenge. But the violent death of a prominent politician gives Shay the opportunity to prove himself, perhaps even be promoted. Shay works with the lead detective on the murder inquiry and his star is rising, until suspicion falls on a member of Shay’s own family. So Shay is off the case. Officially. Determined to clear his family name, his under-the-radar investigation takes him from an opulent mansion in Dublin to Hell’s Kitchen in New York. And his good friend Father Brennan Burke has some surprising contacts for Shay in the shadowy world of New York’s Irish mob.

I had two godfathers when I was growing up: one who put people in prisons and one who had spent time in them. Maybe that explains where I’ve been and where I am today. One of my godfathers was Garda Detective Sergeant Colm Griffith, from County Clare. He is class. He is everything a policeman should be. My own father was Thomas “Talkie” Rynne, who got his nickname because, as a little lad, he never shut his gob. His da used to say, “Would you ever be giving our ears a rest? If I wanted to hear somebody talking world without end, I’d take myself off to the talkies. ” The pictures, he meant. When my grandda first started going to the films, they were silent. Then they got sound and were the talkies. So anyway, my father, Talkie Rynne, got into trouble with the law, when he lost the head and caused injury to a fella who had slandered him while a crowd of them were in their local, skulling pints. The man had been blackguarding Talkie about being out of work and on the dole ― again ― and maybe he’d soon be putting the wife out on the street to earn a few quid for the children’s breakfast. Detective Sergeant Griffith made the arrest. He took Da’s rambling, disjointed statement, and when the case went to court, Griffith went easy on the evidence. He knew he couldn’t get up on the witness stand and tell the entire story. These are the things a Garda sergeant could not say in court:

Your Lordship, this man, Talkie Rynne, served time in a prison camp ― internment camp ― during the Emergency of 1939 to 1945 and came out a different man from the man he was when he went in. He was never the same again. And that’s because he was subjected to a level of brutality that a man does not easily ― does not ever ― get over. He was flogged by the prison authorities, Your Lordship. Whipped! Had he fallen into the hands of the Nazis? Or some other violent faction in a distant land? No, he suffered this torture one county over from us, in a prison camp in County Kildare. In the Curragh internment camp, Mr. Rynne was known as something of a comical card, a teller of tale tales, which you might guess from his nickname. A grand fella to have at the table of an evening. After the flogging, it was a rare occasion indeed that Talkie Rynne was a grand fella at the table.

“I always look forward to the next Anne Emery. They are always impeccably researched, richly atmospheric, and with a spellbinding plot that keeps me hooked until the very end. She is a true Irish treasure on both sides of the Atlantic!” — Jim Napier, author of the Colin McDermott Mysteries, on Fenian Street