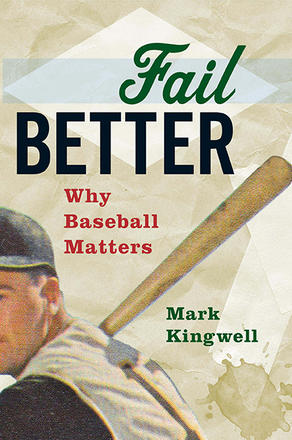 Taking seriously the idea that baseball is a study in failure—a very successful batter manages a base hit in just three of every ten attempts—Mark Kingwell argues that there is no better tutor of human failure’s enduring significance than this strange, crooked game of ... Read more

Taking seriously the idea that baseball is a study in failure—a very successful batter manages a base hit in just three of every ten attempts—Mark Kingwell argues that there is no better tutor of human failure’s enduring significance than this strange, crooked game of base, where geometry becomes poetry.

Weaving elements of memoir, philosophical reflection, sports writing, and humour, Fail Better is an intellectual love letter to baseball by one of North America’s most engaging philosophers. Kingwell illustrates complex concepts like theoretically infinite game-space, “time out of time,” and the rules of civility with accessible examples drawn from the game, its history, and his own halting efforts to hit ‘em where they ain’t. Beyond a “Beckett meets baseball” study in failure, Kingwell crafts a thoughtful appreciation of why sports matter, and how they change our vision of the world.

Never pretentious, always entertaining, Fail Better is set to be the homerun non-fiction title of the season.

Mark Kingwell is a Professor of Philosophy at the University of Toronto and a contributing editor of Harper's Magazine. He is the author or co-author of eighteen books, including the national bestsellers Better Living (1998), The World We Want (2000), Concrete Reveries (2008), and Glenn Gould (2009). His most recent books are the essay collections Unruly Voices (2012) and Measure Yourself Against the Earth (2015).

"Fail Better … is a ballpark ramble of memoir, lore and nostalgia. Its north star is baseball’s time-out-of-timelessness, its leisurely Zen gaps between actions. "—New York Times

"Fail Better is baseball considered personally, historically, poetically, formally, legally, critically, politically, linguistically, ethically, geographically, metaphysically, nostalgically, morally, and aesthetically. Like the game itself, it’s fascinating all the way through. "—Stephen Marche, author of The Unmade Bed: The Messy Truth about Men and Women in the 21st Century

Praise for Mark Kingwell and Catch and Release

"Mark Kingwell is a beautiful writer, a lucid thinker and a patient teacher . .. His insights are intellectual anchors in a fast-changing world. "—Naomi Klein

"[Catch and Release is] filled with a sense of joy and awe. "—Publishers Weekly

Other titles by Mark Kingwell