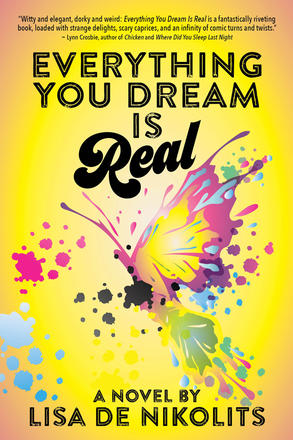 Everything You Dream is Real

Everything You Dream is Real

Eleven years after a world war destroyed the consumer-driven, plastic-based existence of 2055, a new order of players jostles for power. Streaky electricity, ravaging drought, a scarcity of food, and deadly Monarch butterflies make for an increasingly desperate situation.

Eleven years after a world war destroyed the consumer-driven, plastic-based existence of 2055, a new order of players jostles for power. Streaky electricity, ravaging drought, a scarcity of food, and deadly Monarch butterflies make for an increasingly desperate situation.

Worlds collide when both Mother and Sharps?s children are kidnapped by the unstable plastic surgeon Alpha Plus and taken to The Fountain of Youth compound. There?s flowing water and beautiful people and beautiful clothes and an incongruous convent where children wear smart uniforms and are tutored by nuns. Lovely, until they discover that a subterranean sex trade funds the compound and the man who leads it is mad. Can Mother, Sharps, and the others take down Alpha Plus and his army? Or will they too become pawns in his bid for world domination?

Hilarious and at the same time poignant, Everything You Dream Is Real is a fabulous, adventure-filled sequel to highly acclaimed The Rage Room that will delight fans both new and old.

Lisa de Nikolits is the award-winning, critically-acclaimed author of nine novels: The Hungry Mirror, West of Wawa, A Glittering Chaos, The Witchdoctor’s Bones, Between The Cracks She Fell, The Nearly Girl, No Fury Like That, Rotten Peaches, and The Occult Persuasion and the Anarchist's Solution. No Fury Like That was published in Italian, under the title Una furia dell’altro mondo, and launched in Milan in 2019. Lisa lives and writes in Toronto and is a member of the Sisters in Crime, Mesdames of Mayhem, and The International Thriller Writers.

"Witty and elegant, dorky and weird: Everything You Dream Is Real is a fantastically riveting book, loaded with strange delights, scary caprices and an infinity of comic turns and twists. "
Lynn Crosbie, author of Chicken and where did you sleep last night?

"Lisa de Nikolits's Everything You Dream Is Real is aptly named: this novel reads like delirious hallucination, but one with unmistakable immediacy. Come for the sci-fi and action-adventure; stay for the love story that lurks just below the surface. "
Mark Sampson, All the Animals on Earth, The Slip, and Sad Peninsula

"An original, adventurous, and vital writer, Lisa de Nikolits holds up a cracked, kaleidoscopic mirror to our times. Everything You Dream Is Real thrusts readers into an extraordinary, disturbing future and takes them on a raucous, high-stakes, one-of-a-kind journey filled with hope, revenge, love, and tentacles. "
Daniel Scott Tysdal, Wave Forms and Doom Scrolls

"In this wonderfully weird sequel to The Rage Room, an ensemble cast of quirky characters create havoc inside the head of time-travelling anti-hero Sharps. Sexy and funny, Everything You Dream Is Real combines futuristic adventures with irreverent romance to create an entertaining, high-energy read. "
Terri Favro, The Sisters Sputnik

"This is one rollicking ride! In her stunning follow up to The Rage Room, Lisa de Nikolits punches the gas right from the starting line and never stops, taking us through a mind-bending series of twists and turns that will leave you breathless. "
Richard Ehisen, The Open Mic