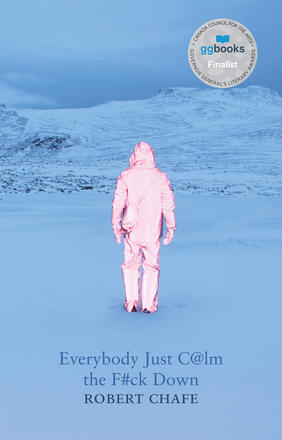 Everybody Just C@lm the F#ck Down

Everybody Just C@lm the F#ck Down

After an unexpected night in a Regina hospital emergency room, Robert Chafe can’t shake the burning question of whether he’s Tennessee Williams or Dorothy Zbornak. Are his symptoms a harbinger of a terrifying undiagnosed condition, or is it all just in his head?

After an unexpected night in a Regina hospital emergency room, Robert Chafe can’t shake the burning question of whether he’s Tennessee Williams or Dorothy Zbornak. Are his symptoms a harbinger of a terrifying undiagnosed condition, or is it all just in his head?

Frenetic, tender, and sometimes scary, Everybody Just C@lm the F#ck Down is a stumbling folly about the aging body, mid-life anxiety, and what it means to live when you can’t know what’s next.

Director, dramaturg, and creator Sarah Garton Stanley is originally from Montreal, is a former associate artistic director of English Theatre at Canada’s National Arts Centre, founding artistic director of SpiderWebShow, co-founder of FOLDA, and a former artistic director of Buddies in Bad Times Theatre. She has been the recipient of the Literary Managers and Dramaturgs of the Americas’s Elliott Hayes Award, a Manitoba Theatre Award for best direction, and an Honorary Member Award from the Canadian Association for Theatre Research. She is finishing a Ph.D. in Cultural Studies at Queen’s University and in 2020 she and her partner became co-stewards of the legendary Birchdale in Nova Scotia.

I wake up with shooting pains in my head. They’re sharp and run from my eyes to the back of my scalp, not connected to my heartbeat, isolated and random. And with every one I can feel my sense of balance shift and wobble, like if I was standing up I’d totally be falling down. I think I might be having a stroke but then I think no this has happened before and you’ve gone to the hospital and there was nothing wrong. And then I think but maybe they missed something, and then I think they gave you a fucking CAT scan Robert chill out and go back to sleep. And I try. But I can’t. I want to know what time it is, and I want to check, but my cell phone is plugged in on the other side of the room. And then I think I really should remember to get an extension cord that reaches behind the bed so that I can plug in my phone a little closer to me or plug in my laptop in case I wake up with a good idea instead of waking up with shooting pains. And then I’m thinking about my computer and how much I have on it and the last time I might have backed it up and that I really should back it up and that I really should have brought it upstairs with me because what if there was a break-in and they took it, I mean my life is on that computer, unfinished work, stuff I’m excited about, proud of, stuff I’m not so proud of, stuff that’s private, very private, and then I’m more stressed about someone accessing my computer than I am about them stealing it and then I remember that it has a security lock. And then I’m thinking about screensavers and how they have evolved, how they used to be all abstract and trippy and how now all the screen savers are nature pictures, polar bears and penguins getting ready to jump and leopards in tall grass, and lush green valleys and how IT’S ALL A LIE and that screensavers really should be pictures of the factories in China and landfills filled with plastic wrap and scrap electronics. And then I’m thinking that screen savers are like everything else we surround ourselves with, they’re just a desperate attempt to forget what we are and what we’ve done to the world, and that’s what TV is like too. And art is like that a lot of the time, theatre, for sure, I’ve made theatre like that! And I’m thinking about that, and TV, bad TV, and sports, professional sports, and then I’m thinking about professional sports and how it’s really only a sanitized way of feeding our deep-seated need to be combative and pack driven without actually shedding blood. And then I’m thinking that’s not all sports surely but maybe just team sports, because stuff like synchro or the hammer throw doesn’t really hold the same thrill so obviously people watch those for pure reasons, an appreciation of the skill and athleticism and then I’m thinking that no fuck that no in fact people don’t watch those sports at all unless there’s a flag on the person’s shoulders and a medal count so it’s all the same thing then right? And then I’m thinking about Chomsky’s comments about professional sports being a grand distraction purposely endorsed, IF NOT STAGED, by the powers that be to keep us occupied while really consequential and truly catastrophic shit goes down. And then I think I really should learn that quote so I can whip it out at parties and in arguments, and then I think I should look it up and that I really should have brought my computer upstairs, and then I think I hear noise downstairs.

And I stop breathing so I can listen.

And then I start thinking about how loud or quiet an intruder could would should be for me to be able to hear them all the way up here in my bedroom, and then I have to breathe again, like I HAVE to breathe again and so work on convincing myself that it was nothing.

It was really nothing.

It was probably nothing.

Just the house settling. Even though it’s really old and should have settled by now.

And then I’m thinking that safety and serenity are like a rickety house, a house too old, over stressed, dangerous possibility of collapse, when the wind blows hard, or when it rains heavy, but most days it can manage to stand, I can keep it together just fine this rickety old house of peace and calm, it can stand just fine as long as I breathe, and so I do, I breathe, I breathe, and as I lie there breathing, 1 2 3, 1 2 3, in through the nose, as I lie there breathing this old house of sanity is standing just fine.

And then I think I smell smoke.