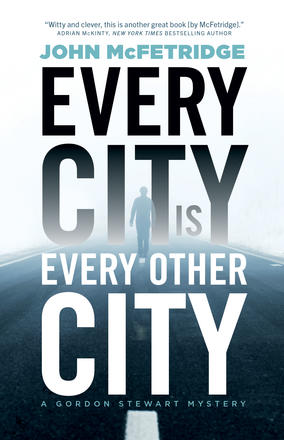 Gord Stewart, 40 years old, single, moved back into his sub­urban childhood home to care for his widowed father. But his father no longer needs care and Gord is stuck ... Read more

Gord Stewart, 40 years old, single, moved back into his sub­urban childhood home to care for his widowed father. But his father no longer needs care and Gord is stuck in limbo. He’s been working in the movie business as a location scout for years, and when there isn’t much filming, as a private eye for a security company run by ex-cops, OBC. When a fellow crew member asks him to find her missing uncle, Gord reluctantly takes the job. The police say the uncle walked into some dense woods in Northern Ontario and shot himself, but the man’s wife thinks he’s still alive.

With the help of his movie business and OBC connections, Gord finds a little evidence that the uncle may be alive. Now Gord has two problems: what to do when he finds a man who doesn’t want to be found, and admitting that he’s getting invested in this job. For the first time in his life, Gord Stewart is going to have to leave the sidelines and get into the game. Even if it might get him killed.

Driving back to the movie set I figured with the information Teddy would give me – which would be nothing – and a couple of talks with cops in Sudbury and maybe a couple of interviews with friends of Kevin Mercer it might be enough to be an investigation and then Barb Mercer could put it to rest and move on.

As soon as I thought that I caught myself. Lana was right, of course, there wouldn’t be any closure or any real moving on, Barb would live the rest of her days in the same way whether she believed her husband killed himself or that he just left.

Or maybe not, maybe if I tried hard enough I could convince myself that the rest of Barb’s life would be different if she knew one way or the other, it would be better somehow.

Why not, as a location scout I spend my life finding things that people believe are something else; a bar in Toronto is in New York, the front of a house propped up on an empty lot in Oshawa is a haunted house in Maine in 1955, half of downtown is the Suicide Squad’s Midway City.

As I was pulling into a spot on a side street we were using for crew parking my phone rang. It was Teddy.

“Where was the last place this guy was seen?”

“I’m not sure, he drove up to about a hundred clicks north of Sudbury and walked into the woods. ”

“That’s where they found his truck?”

“But when was the last time someone identified him?”

I wasn’t sure exactly what he meant. “His wife saw him on the morning of the 8th and the police found his truck on the side of the road two days later. ”

“And his credit card was used on the road, he stopped for gas and lunch on the way, right?”

“You’ve got the statements,” I said.

“Yeah, I was just wondering,” Teddy said, “the last time he used the card was at a gas station in Sudbury?”

“Then he drove about a hundred kilometers north, it’s just woods up there, it’s not even a highway it’s an old mining road. ”

“And he stopped in the middle of nowhere and walked into the woods, that’s the theory?”

“Yeah, that’s it. It all fits,” I said, feeling bad again, realizing that Barb would never get anything more because she already had everything and just didn’t want to believe it.

“He also used the card at an Esso station about a hundred clicks south of Sudbury, spent a hundred and eighty bucks. ”

“That’s what I thought,” Teddy said. “I imagine that’s what the cops thought, too. How far could he get with a full tank?”

“So two or three times as far as he drove?”

And then Teddy said, “And he spent a hundred and ninety at a station in Parry Sound. So tell me, why do you think he spent another hundred and seventy-five dollars at a gas station in Sudbury?”

Teddy said, “That sound likely to you?”

And I had to admit, it did not.

“The lively exchanges between Gordon and Ethel lighten the mood while providing insights into some serious topics such as suicide and the #MeToo movement. Intelligent characters are a plus. Readers will look forward to seeing more of Gordon. ” — Publishers Weekly

“Every City Is Every Other City is smart, funny, sly, whimsical and original. ” — Toronto Star

“Every City Is Every Other City is a terrific P. I. novel in a completely original milieu that Elmore Leonard would have been proud to have written. Witty and clever, this is another great book from one of Canada’s most underrated mystery novelists. ” — Adrian McKinty, award-winning and New York Times bestselling author of The Chain

“Nobody writes more sympathetic or likeable protagonists than McFetridge does. ” — Peter Rozovsky, Detectives Beyond Borders

“McFetridge provides an energy forward look at the mystery genres and wins. Call your bookstore and arrange a pick-up. You won’t regret it. ” — The Bay Observer