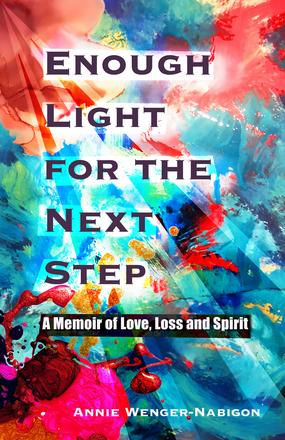 Enough Light for the Next Step

Enough Light for the Next Step

Enough Light for the Journey tells the story of Annie Wenger-Nabigon and her husband Herb Nabigon, an Oji-Cree Anishinabe elder. In this powerful and moving tribute to her late husband and the beliefs and teachings he shared with her, Annie Wenger-Nabigon shares the Oji-Cree ... Read more

Annie Wenger-Nabigon, Ph.D., is a retired therapist and social work educator. She was born in mountainous southern territory of the Osage Peoples (northcentral Arkansas), the oldest child of Mennonite medical missionaries, and spent most of her childhood years in a Mennonite community in Lancaster, Pennsylvania, the traditional territory of the Susquehannock Peoples. Between the beginning of her story and the current time, she has traveled across many territories, borders and boundaries, always learning, always finding the Light. She currently resides in northern Ontario, Canada.

Not many people who know me truly understand the backstory ofmy life with Herb and what it is that seamlessly ties me into thefinal stage of his life. A few people know bits and pieces, fragments of mystory, but a rarer few have comprehended how far a journey I travelledto be in a life with Herb. It seems incongruous, unlikely--how couldsomeone from my background come to fit so intimately into a life withthis Anishnaabe Elder? It is an intricate puzzle.

Family and relatives, and some friends, know parts of my originstory--the birthplace in the mountains of north central Arkansas in thetraditional territory of the Osage nation. I lived in an isolated Mennonitemedical mission site consisting of a school, a church, and a clinic buildingwhere we had our home. My father helped in the church and withforest firefighting crews and did occasional mail deliveries around themountains. My mother was a nurse and midwife who ran the local clinic. She sometimes took me with her on visits to remote mountain cabins tobring medical care to isolated families. Her skills and dedication savedthe lives of both people and animals, and ushered hundreds of babies intothis life.

There were no veterinarians anywhere in the regions of thosemountains in the 1950s. My mother's skill in stitching up woundedhumans was occasionally called upon to help animals. One day, a manin deep distress came to the clinic in which we lived and pleaded withmy mother to come with him to the mountain, where his logging mulelay mortally wounded after a rolling log wrapped a chain around its leg,tearing into the hind quarter muscles. My mother protested that sheknew nothing about sewing up a mule, but he told her he didn't care. Themule was the only thing keeping his family from destitution. Without hismule, he could see no future, and he wanted her to try to save its life. If shecouldn't, that was God's will, but to not try was unforgiveable. She tookall the sulfa powder in the clinic, all the bandages and tape, all the sewingimplements and supplies, everything that she had on hand, and rodewith him in the truck to the place where the wounded mule lay on themountainside. She walked up the steep terrain and while the men heldthe mule still, she worked for hours, kneeling on the forest floor, pouringthe sulfa into the wound, and cleaning and stitching until she had donewhat she could do. The mule lived, much to her amazement.

The years in Arkansas established central themes in my life: theattachment problems, the striving for recognition and accomplishment,the fierce independence and outspokenness that often got me intotrouble. It also grounded my passion for justice, fairness, and service, andmotivated me to join with people that the dominant society ignores ordiscards.

Probably the most formative early event of my life was getting lostas a toddler deep in the Ozark National Forest where the mission waslocated. It remains a miracle that I was ever found by searchers withtracker dogs. I've wondered in recent years: whose ancestral spiritswatched over the lost child in the forest? Did birds and small animalscome to me? Was I frightened or comforted? I remember the little bugI was following into the forest to see where it lived--and then everythinggoes dark. The memory disappears. I have come to understand now thatthere was a darkness of a more ominous nature that drew me into theforest, intending me harm, but forces of love stayed with me and kept mesafe.

I remember other things from those very early days, such as being inmy crib at night by the open window, clinging to the railing while peeringat the stars and moon in the big night sky above the mountain behind thehouse. The nighttime calls and songs of the whippoorwills still echo inmy memory with an essence of entranced wonder and awe.

I remember my pet chicken and the playhouse built by my fatherfrom corn shocks in the garden, and the dark, earthy smell of its cozyspace inside. I remember the flood that destroyed the peanuts andwatermelons I had planted by myself, and the bitter tears I shed when Isaw the flooded garden. I remember my pet dogs and cats and the hoursof joy playing with them. There were few opportunities to play withother children, except when going to the tiny church twice on Sundayand once on Wednesday night. Behaving and being quiet in church wasan impossibility for my enthusiastic child nature, and I remember mymother's sternness. The gurgling stream that ran by the house and churchcalled to me, and I played there for hours, searching for tiny stones andfrogs and crayfish and minnows. Nature was my teacher, and my pet dogwas my protector companion who comforted me in a loneliness thatwent DNA deep.

When I was born, my parents loved me dearly but hardly knew whatto do with me. They were in their late thirties and I was their first baby. I slept little and cried much, confounding the limits of their patience,and I ended up being abused as a result of my mother's frustrated, frayed,nervous determination to make me be "a good girl. " My mystified fatherindulged me generously, and he often argued loudly and bitterly withmy mother over their differences in raising a child like me. Those earlyfrightening arguments formed my opinion of myself as a problem,someone who was deeply flawed, needing to fix everyone and everythingso the world could be a safe place, but who would fail miserably at eversucceeding.

The happiest event of my early childhood was the birth of a babybrother the month before I turned three--an event that came a day afterI had disappeared, again. When found, a mile up the creek with not astitch of clothing anywhere, I was beaten by my mother to teach me notto "run away. " The hardest thing in my early years was never knowingor understanding when or why the harsh punishment "teaching" wouldbe applied. I lived with fear much of the time, while also having lovingattention from both parents and others the rest of the time. I just neverknew or could predict which it was going to be, when I was going to becoddled or beaten, and fear formed my psyche. Strange lessons to tryto integrate into a child's soul when Sunday School teaches that Jesusloves you and would want you to turn the other cheek to violence andbe peaceful. I experienced the unfairness of violence and could notcope with what I now know was the resulting cognitive dissonance. Dissociation became part of my psychological makeup, creatingdifficulties for me throughout my life.

A profound love suffuses Annie's eloquent memoir of the path - hers starting from the southern mountain forests of the United States and his from the northern shores of Lake Superior -- that converged to the life she and her late partner were destined to share in his last ten years. Her struggle to gain "a wisdom that opens the heart to gratitude and joy" through the teachings imparted by Elders as she grapples with her grief is inspiring to anyone who has lost their partner.

When Herb and Annie returned to Biigtigong Nishnaabeg (Pic River First Nation) they invited Pearl and I, strangers, into their home for a meal of moose and genuine hospitality. Annie, ever a student and a teacher of the ways of the heart and of healing, invites readers into her spiritual home. In Enough Light for the Next Step: A Memoir of Love, Loss, and Spirit Annie shares herself, and her enduring love for Herb Nabigon, whose wisdom, kindness and stories she has inherited and has woven with her own. The result is a sumptuous feast with a dear friend you may have just met.