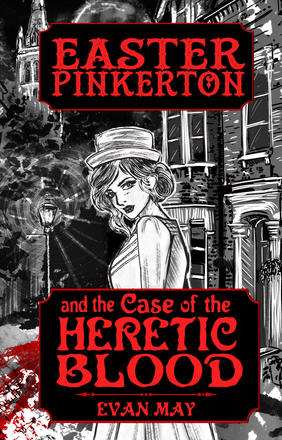 Easter Pinkerton and the Case of the Heretic Blood

Easter Pinkerton and the Case of the Heretic Blood

The year is 1883, and Easter Pinkerton is one of the most secret agents in the Crown's service. The greatest constant in her life has been her duty to the realm: she knows its secrets, safeguards its interests, and kills its enemies. Pinkerton's world of shadows, lies, and hidden ... Read more

The year is 1883, and Easter Pinkerton is one of the most secret agents in the Crown's service. The greatest constant in her life has been her duty to the realm: she knows its secrets, safeguards its interests, and kills its enemies. Pinkerton's world of shadows, lies, and hidden motives is a battlefield where she expects to find few surprises, but her latest investigation has uncovered something beyond a fresh nest of treason. The trade of blood for power is a familiar enough transaction, but not when that power includes raising the dead or death, delivered invisibly at a distance. Pinkerton will have to prepare to fight enemies she could not have imagined, rely upon allies she would never have contemplated, and above all, decide where her duty truly lies. The threat is one that she would have once insisted was imaginary, and so Pinkerton may have to consider an alternative she would have likewise declared to be impossible, and become a traitor herself.

Evan May is a writer and history professor who lives in Ottawa, Canada. His MA and PhD in medieval history largely focused on scamps and troublemakers in 15th century England, and he now also writes down the strange things that live in his head.

His first two novels, The King in Darkness and Bonhomme Sept-Heures, were also published by Renaissance Press.

La Rothiere nodded once, slowly, and extended a right hand companionably. Streatham reached to take it, and then La Rothiere's left hand, unnoticed, lashed upwards, and the gleaming knob of the stick thudded into Streatham's head. The draftsman toppled to the alley cobblestones without uttering a sound, and his contact quickly crouched over him and laid the stick down. They had come prepared with a small pistol, had it proved necessary, but a gunshot, even in a place such as this, would inevitably and immediately attract attention and this was far better.

The right hand vanished into the long coat and came out with a knife, balanced for fighting, although there was no resistance here. The left grasped Streatham's tie and pulled him up onto the point of a blade sharp enough for surgery, piercing him to the heart as one last breath gurgled from between his lips. The splendid hat sat upended near his waist, and a pool of deep red blood began to explore the joints between the cobbles and the detritus of the alley floor.

Streatham's contact glanced up and down the alleyway but no-one had seen the death. Good, that allowed for things to be arranged. Streatham's body was hastily searched; a heavy purse was found, a fine silver watch, and a small pocketbook held closed with a band of elastic. All these things were taken, which would help create the appearance of a robbery, and impression that might baffle the detectives of H Division for a time. The knife was wiped clean on Streatham's checked trousers.

The leather folder, with the naval plans, was gathered up, and the person who had pretended to be Nicolas La Rothiere stood up and lit a second cigarette as they left the alley, and tugged the brim of their rather more plain hat at a drunk who would presumably remember nothing of the person they had staggered past, but it mattered very little, for almost all the details of that person were a fraud. The person who had claimed to be Nicolas La Rothiere was not an agent of a foreign power, not a Frenchman, and indeed not a man at all.

Instead, this was a woman, who had come wearing what she thought of as her 'walking clothes' and thus in male disguise because in her considerable experience the easiest way to entrap and eliminate Arthur Streatham was if he thought he came to a rendezvous with his fellow conspirator, and suspected nothing until the very moment the trap was sprung. The woman was a great believer in the precision of and effectiveness of her tools, from the tantalizing hint of an accent that had helped sooth and trap her prey to the the obsessively honed knife that had taken his life. All were equally vital parts of successes such as tonight's operation. Her name was Easter Pinkerton, of somewhat vague employment in the British government. Her duties in that capacity would be hard to describe with any precision, but she thought of herself as a sword and shield against the Queen's enemies, two of which had been thwarted tonight.