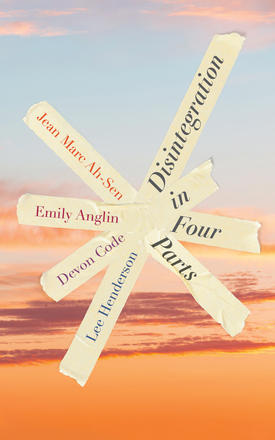 "All purity is created by resemblance and disavowal. " With this sentence as a starting point, four authors each write a novella considering the concept of purity, all from astonishingly different ... Read more

"All purity is created by resemblance and disavowal. " With this sentence as a starting point, four authors each write a novella considering the concept of purity, all from astonishingly different angles. Jean Marc Ah-Sen writes about love blooming between two writers belonging to feuding literary movements. Emily Anglin explores an architect's search for her twin at a rural historic house. Devon Code documents the Wittgensteinian upheavals of the last days of an elderly woman. And Lee Henderson imagines Dada artist Kurt Schwitters finding unlikely inspiration in a Second World War internment camp in northern Norway.

Wildly different in style and subject matter, these four virtuoso pieces give us a 360-degree view of a philosophical theme that has never felt so urgent.

“Despite the disparity of their subject matter – a Nazi-evading Dadaist detained in Norway, urban and familial estrangements, complicated love amid the avant-garde, the vicissitudes of old age – these brilliantly inventive, delightfully strange stories cling together like four unlikely soulmates, unified by art’s pursuit of coherence through life’s various disintegrations. ” —Pasha Malla, author of Kill the Mall

Jean Marc Ah-Sen is the Toronto-based author of Grand Menteur, which The Globe and Mail selected as a top 100 Best Book in 2015. The National Post has hailed his work as "an inventive escape from the conventional." He lives with his wife and two sons.

Writer and freelance editor Emily Anglin grew up in Waterloo, Ontario, and now lives in Toronto. She holds an MA in Creative Writing from Concordia University and a PhD in English from Queen’s University. Emily Anglin’s first collection of short fiction, The Third Person, was published in 2017. She is currently at work on her first novel.

Devon Code is a fiction writer. He is the author of Involuntary Bliss, a novel, and In A Mist, a collection of stories. His latest fiction can be read in issue 107 of Geist. In 2010, he was the recipient of the Writers' Trust Journey Prize. Originally from Dartmouth, Nova Scotia, he lives in Peterborough, Ontario, where he teaches at Fleming College.

Lee Henderson is the author of three books: a collection of short stories and two novels, all published with Penguin. A contributing editor for Border Crossings magazine for over fifteen years and cover curator for The Malahat Review since 2105, Henderson teaches creative writing at the University of Victoria. Henderson’s visual art has been exhibited in Canada and abroad.

Other titles by Jean Marc Ah-Sen

Other titles by Emily Anglin

Other titles by Devon Code