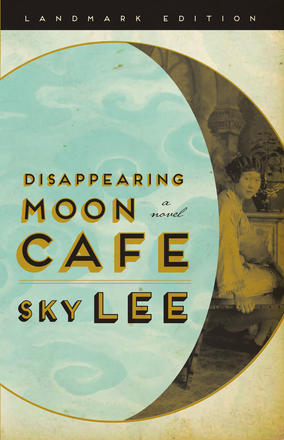 Intricate and lyrical, suspenseful andemotionally rich, it is a riveting story of four generations of women whoselives are haunted by the secrets and lies of their ancestors but also by theracial divides and discrimination that shaped the lives of the first generationof Chinese immigrants to Canada.

Each character, intimatelydrawn through Lee’s richness of imagery and language, must navigate a worldthat remains inexorably “double”: Chinese and Canadian. About buried bones andsecrets, unrequited desires and misbegotten love, murder and scandal, failureand success, the plot reveals a compelling microcosm of the history of race andgender relations in this country.

SKY Lee grew up in Port Albermi, BC. In the late 1960s, she was a founder of the Asian Canadian Writers' Workshop. Her debut novel, Disappearing Moon Cafe, was nominated for a Governor General's Literary Award and won the City of Vancouver Book Award. SKY Lee currently resides in Toronto.

Heremembered that by then he was worn out from fighting the wind. He had to stopand rest in a shaded spot, so he found a smooth, flat stone to sit on, beside astream that meandered off around a sharp bend. He was bone-tired from all thiswalking, watching the land dry out and the trees thin out. He wasn’t thirsty;he was hungry, the last of his provisions gone days ago. So very hungry, sovery tired of quenching his thirst on cold mountain water, sweet as it was

Hewanted to complain out loud, “Why send men out to starve to death?” But thewind snatched the words out of his mouth, and even he couldn’t tell if he hadspoken them or not. He looked up at the unsettled sky and realized that if afreak storm should happen, he would be finished. He slapped his knees and shookhis head. Ill-equipped, ill-informed, he was doomed from thestart.

Ha! he thought. A bone-searching expedition! We’llfind bones all right, gleaming white, powdery in the hot sun, except they’ll beour own. His feet ached relentlessly, throbbing cold from wading throughditches and icy creeks. Already, holes in the thinned soles of his borrowedboots.

“I suppose I should be damned grateful I am stillalive to feel the ache!” he cursed out loud. Then there was the loneliness. Hedidn’t want to think about the loneliness; it was the most dangerousstruggle.

He didn’t know why he’d been chosen. Perhapsbecause he was young and big, and had muscular shoulders. Maybe because hishair was thick and smooth, and not just black but blue-black. He had two whorlson the crown of his head—the sign of a nonconformist. He also had very bighands. Most likely the old men had liked his face and its look of kindinnocence.

They said, “This youth has a tender face, but hehas the look of an old soul. ”

“Yes,” they replied,“you have been reincarnated many times. You have lived many lives fruitfullyand have a deeper understanding of many things. ” They told him that he mustbelieve.

“Believe what!” he demanded.

“My mission is to search out the bones ofthose who have died on the iron road, so they can be sent back home … by you,the Benevolent Associations. ”

“No!” the old eyes commandedbrilliantly. “It is more than that. To believe is to make it live! You mustmake your mission live, or else you will not succeed. ”

Thus,they sent him into a trance. Around him, the mountain barricaded with treesreaching into the eternal mist, and the rain pressed down from the heavens. Hefelt totally hemmed in. His eyes untrained to see beyond the wall ofwilderness, his heart unsuited to this deep, penetrating solitude. Hunger hadalready made him hallucinate, afraid of the rustling leaves and whistlinganimals.

So he thought she had to be a spirit when he mether. In this dreamlike state, he thought maybe he had died and she was anotherspirit here to guide him over to the other side.

“Look, achinaman!” She crept up behind him and spoke in his language. He whirled aroundand his knees buckled under, the last of his strength not enough to contain hisfurious trembling. Meanwhile, she darted back into the safety of the underbrushand hid. He couldn’t see her, but he could hear her laughing at him; the soundsgurgled like an infant’s blown back and forth by the wind. The whole landscapewinking and flashing at him.

“You mock me, yet you don’t dareshow yourself to me,” he challenged, peering into a shimmering sea of leaves. “Come out now!” he barked with bravado.

“Ah, so he speakschinese,” the voice observed. Finally, a brown face peeped out of the stems andbrambles. She was an indian girl, dressed in coarse brown clothing that madeher invisible in the forest. Her mouth did not smile, but her eyes werefriendly—a deer’s soft gaze. He was astonished when she stepped out onto thetall grass.

“You speak chinese,” he said, indignant,unwilling to believe what he saw before him.

“My father is achinaman, like you. His eyes are slits like yours. He speaks like you. ” Shespoke deliberately and demonstrated by pulling back the skin beside her dark,round eyes. He saw that she was wearing a crude cape made of a worn animalskin. A long blanket served as a skirt and covered her bare feet. A smallbasket hung across her chest and made her look stooped over. Yet she movedgracefully, swaying from side to side, small intense movements like a littlebrown bird. He stared like a crazy man, because he thought she would disappearif he didn’t concentrate on her being.

“But you’re a wildinjun. ” He spilled out the insults in front of her, but they were meaninglessto her. In chinese, the words mocked, slanglike, “yin-chin. ”

“Youlook hungry, chinaman. ” She tipped her head to one side as she looked him upand down. From her clothing, she drew out coiled strips of some kind ofsubstance and held these out to him. “My father tells me chinamen are alwayshungry. ”

“I am not hungry,” he shot back. He could tell shewas teasing him, and he was o¤ended that she knew more than he did. She couldtell he was hungry, that he had no more power left, that in this wilderness hewas lost.

“Ahh, he has no manners,” she exclaimed. He couldonly blink, astonished by this elegant rebuke from a “siwashee,” a girl,younger than he. It made him feel uncivilized, uncouth; the very qualities hehad assigned so thoughtlessly to her, he realized, she was watching for inhim.

It was then he recognized familiar features on her darkface. A melon-seed face, most admired in a beautiful woman. Her hairline high,inkstrokes by an artist’s brush down both sides of her face. Cheekscaressed.

Ah, he thought, why be afraid of her! What was shebut another human being? Why should she mean him harm? He stepped up to takewhatever it was from her hand, but as he reached out, she sprang back, droppingthe strange food behind her like one of those shy creatures who sense no greatdanger but move prudently out of range just in case. Again, he was surprised tosee that she was wary of him. It emphasized the distance between them, as ifshe was not a human being as he was, or … as if he was not a human being as shewas.

The food was seaweed, both crunchy and rubbery soft. Ashe chewed hungrily, she watched him and he watched her. After a while, shehoisted a heavily laden basket of freshly dug-up roots and bulbs up onto herback. She secured it with a wide band across her forehead. Her hand carried aslim stick, one end of which was dirtied, perhaps from digging the roots, andthe other end of which was carved, perhaps bone. This she waved at him andcalled out, “Come and sit!” nonchalantly as if the invitation was for any time,as if in a day or two he would not be dead of exposure. “My father enjoys thecompany of his own kind. And he will be glad to help you find yourway. ”

“Yes,” he answered, his mouth full of gracefulness,“perhaps I should have a word with your father. ”

Then, as ifthe barren wasteland around him had magically opened and allowed himadmittance, he followed her through dense thickets, up hills and down throughravines, a respectable distance between them. He marvelled at her bare feet,which padded softly along the forest floor without injury. Many times he sankto his knees, soaked in sweat, so tired he could hardly hold up his head. Hewas fearful that she would abandon him, but she paced her steps according tohis strength and smiled encouragingly.

They followed the bigriver until they finally arrived at her home, which stood high up on the cli¤side of a mountain overlooking the water. By then darkness had fallen and thewind was blowing fiercer than ever, the first raindrops of a storm about todescend.

He knew it was on a cli¤ because he could see thewide expanse of stars beyond the immediate trees, and he could hear rushingwater far below them. She ran into the little cabin first, then a man and awoman came out and stood beside the door. They peered excitedly into the night,looking for their visitor.

It was so dark, he couldn’t see their faces. He just gotthe idea that they were older by their voices and the placid way they bothmoved.

“My name is Chen Gwok Fai. Come in and rest, sir! Whatis your precious surname, sir?”

Chen put his hands on Gwei Chang’s shoulders and ledhim into the tiny cabin. Beside a small fire in the fireplace, Gwei Chang sawthe girl kneeling, her hands in front of her, reaching for warmth. He noted theintelligence in her face, ignited by the firelight; hers was a beautiful facefull of vision. He didn’t remember anything else, because he fell unconsciousright on the spot, and he slept for a long, long time. By the time he awakened,he had stayed for three years.

“Powerfullyand elaborately wrought, Lee’s first novel traces generations of aChinese-Canadian family and their ties to (and clashes with) one another, theirculture, and their land in China and North America … the layers of experience,emotion and cultural identity of succeeding generations build to an abundantlydetailed story. ”
~Publishers Weekly

“Thisambitious and vastly entertaining first novel follows four generations of atroubled Chinese-Canadian family through its gradual and often painfulassimilation and eventual disintegration…. The lively, often riotous spirit ofDisappearing Moon Cafe is never lost in the epic sprawl. This is a moving, deeply human tale about the high price of assimilation, theloneliness of being of two cultures but no longer really belonging to eitherand the way in which the sordid secrets of the past can cast long, tragicshadows…. If Gabriel Garcia Marquez had been Canadian-Chinese, and a woman,A Hundred Years of Solitude might have come out a little bitlike this. ”
~Washington Post Book World 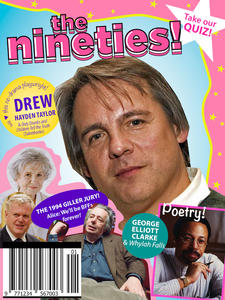 The 1990s in Canada was marked by the continued recession of the '80s, grunge-rock, the rise of celebrity culture and tabloids, and the Information Age. (And dangerous children's toys. See: moon shoes.) Scroll down to see what historical and literary happenings we dug up.