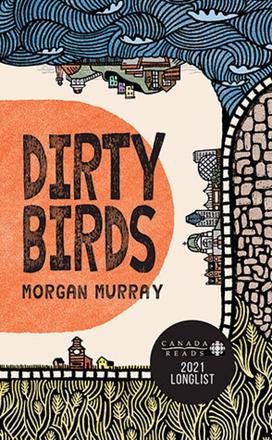 In late 2008, as the world’s economy crumbles and Barack Obama ascends to the White House, the remarkably unremarkable Milton Ontario – not to be confused with Milton, Ontario – leaves his parents’ basement in Middle-of-Nowhere, Saskatchewan, and sets forth to find fame, fortune, and love in the Euro-lite electric sexuality of Montreal; to bask in the endless twenty-something Millennial adolescence of the Plateau; to escape the infinite flatness of Saskatchewan and find his messiah – Leonard Cohen. Hilariously ironic and irreverent, in Dirty Birds, Morgan Murray generates a quest novel for the twenty-first century—a coming-of-age, rom-com, crime-farce thriller—where a hero’s greatest foe is his own crippling mediocrity as he seeks purpose in art, money, power, crime, and sleeping in all day.

Morgan Murray was born and raised on a farm near the same west-central Alberta village as figure-skating legend Kurt Browning (Caroline). He now lives, works, plays, writes, and builds all sorts of crooked furniture in Cape Breton. In between, he has been a professional schemer, a farmer, a rancher, a roustabout, a secretary, a reporter, a designer, a Tweeter, and a student in St. John’s, Calgary, Prague, Montreal, Chicoutimi, and Paris. He holds a Bachelor of Arts in Canadian Studies from the University of Calgary, a Certificate in Central and Eastern European Studies from the University of Economics, Prague, a Master of Philosophy in Humanities from Memorial University of Newfoundland, and a participation ribbon for beef-calf showmanship (incomplete) from the Little Britches 4-H Club.

“Dirty Birds is absurd and tender, familiar and bizarre, and completely unforgettable. ”

— Will Ferguson, winner of the Scotiabank Giller Prize

“Dirty Birds is a whip-smart, structurally coherent romp that dresses its satire in the weeds of comic mayhem. "

“Dirty Birds is an absurd novel about absurd subcultures of artists, grad students, and adultescents that author Morgan Murray explores with both laugh-out-loud lunacy and scathing insight. ”

"One of the most fun and dynamic aspects of the book is Morgan’s facility with different dialogues. These include, but are not limited to, the matrix of the prairie junior hockey structure, the non-stop conversation of a Newfoundland taxi driver, academic papers, police files, and, most prominently, Milton’s poetry. These are often decoded and/or annotated in footnotes, a comedic amplification that’s an effective and refreshing device in this fiction. There’s work and care in the writing; the experiences, however foolish, feel earned. At the same time it’s kinetic: the words, like birds, take flight. "

“Dirty Birds: one of the funniest things I’ve read since I took home my grade 4 report card. ”

"If you ever feel you’re in the mood for something completely absurd, out of this world (but in it), something that will make you laugh, wonder what the heck is going on, and reflect on the author’s wild imagination, Dirty Birds is your book. "

"This book would make a great Canadian film starring Michael Cera. Refreshingly backlit with the nostalgia of Obama era planet Earth, riffing on a myriad of contemporary themes including intergenerational tensions and anxieties, global economic frailty and the pursuit of young desire, Dirty Birds is the perfect misfit read for your next layaway, or when you’re down to your last shot of whisky. It provides days’ worth of warm, weird feelings. "

“A vast, fantastic and original book, not to mention utterly hilarious. The kind of book you'll devour and then wish you hadn’t read it so quickly, but happily, you can start it all over again! Definitely one of my top ten books of 2020.

I loved this: “‪Make the world bigger by your being in it. . .. the way you pour yourself out into the world to quench another’s thirst, the way you exist and the way you persist. ” Words to live by. ”

"Morgan Murray’s Dirty Birds is the delightful, literary, hoser middle ground between A Series Of Unfortunate Events and Jackass. The story of Milton Ontario’s poetic aspirations spans over 500 nonsensical pages and, even though you won’t understand a word Noddy or Georgette or Jerry or Gerry is saying, I promise you won’t be bored. .. this is an impressive debut novel that knows when to joke and when to deliver some actually poetic inner monologue. I can’t wait to see what Murray comes up with next. "

"The narrative voice in Dirty Birds reminds me a bit of the dry comic you find reading The Hitchhiker's Guide to the Galaxy, only this unfortunate protagonist, named Milton Ontario, (not to be confused with Milton, Ontario) journeys from Bellybutton, Saskatchewan to live in a dirty closet he found on Craigslist - dans le metropolis of Montreal. .. All so he can be a poet like his hero, Leonard Cohen. Morgan Murray fills his pages with dialogue spoken in hilarious Canadian vernacular, something that so rarely meets the page in popular fiction, interspersed with his own black and white illustrations, and the most epic footnotes detailing facts from Canada's history the way you wish you had heard them in high school. " 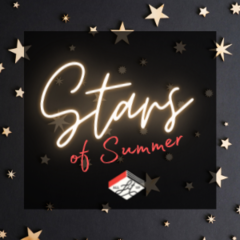 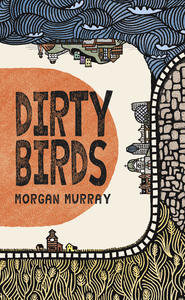