In the fall of 2017, the acclaimed writer and musician Vivek Shraya began receiving vivid and disturbing transphobic hate mail from a stranger. Celebrated artist Ness Lee brings these letters and Shraya's responses to them ... Read more

In the fall of 2017, the acclaimed writer and musician Vivek Shraya began receiving vivid and disturbing transphobic hate mail from a stranger. Celebrated artist Ness Lee brings these letters and Shraya's responses to them to startling life in Death Threat, a comic book that, by its existence, becomes a compelling act of resistance. Using satire and surrealism, Death Threat is an unflinching portrayal of violent harassment from the perspective of both the perpetrator and the target, illustrating the dangers of online accessibility, and the ease with which vitriolic hatred can be spread digitally.

Ness Lee is an illustrator/artist based in Toronto. Her illustrations have been chosen for award publications such as American Illustration 35 and the Society of Illustrators 57 and she has exhibited her works at galleries in Toronto, New York, Boston and Tokyo. She graduated from the Ontario College of Art and Design with a Bachelors of Design degree in Illustration. She has continued to explore her practice using a wide range of mediums such as ceramics, drawing, painting, and mixed media sculpture.

That Vivek shares her life so openly is an inspiration to many but is not without costs. I'm so grateful for her voice. It feels like a natural fit for comics. -Jillian Tamaki, co-creator of Skim and This One Summer

Death Threat is fearless and ambitious. I have no idea where Vivek will go next but we should all be very excited to follow her there. -Michael DeForge, author of Ant Colony and Big Kids

Death Threat perfectly expresses the feeling of being exposed to the hurtful and threatening presumptions of strangers. Vivek Shraya and Ness Lee transform a hideous and constrictive mindset into beauty and love. -Lisa Hanawalt, production designer/producer, BoJack Horseman; author of Coyote Doggirl

In transcending hate and ignorance with strength and vulnerability, Shraya - with the assistance of Lee [and colorists] Phan and Tang - deliver a message of hope and courage to all trans women. -Gay League

An unexpected and ebullient pairing of two rising stars in Canadian writing and illustration, approaching a fraught subject with an unconventional and surprising look at the perspectives of both perpetrator and victim. -Quill and Quire

Documenting the hate mail that Shraya gets, she uses satire, surrealism, and the illustrations of Ness Lee to bring online dangers to life and provide life-saving visibility to the dangers trans people face everyday. -Out 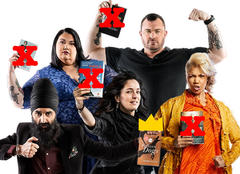