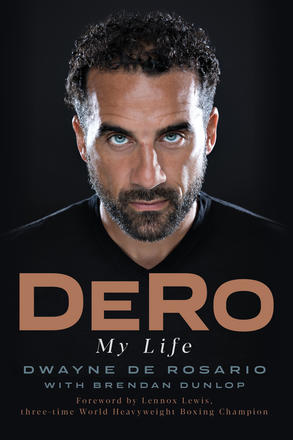 Dwayne De Rosario is one of MLS’s 25 Greatest Players

The autobiography of one of the best male soccer player to ever come out of Canada. Before Beckham, Kaká, Rooney, and Zlatan, DeRo was the godfather of Major League Soccer.

DeRo is the life story of one of the greatest ... Read more

Dwayne De Rosario is one of MLS’s 25 Greatest Players

The autobiography of one of the best male soccer player to ever come out of Canada. Before Beckham, Kaká, Rooney, and Zlatan, DeRo was the godfather of Major League Soccer.

DeRo is the life story of one of the greatest athletes Canada has ever produced. Born and raised in Scarborough, Ontario, Dwayne De Rosario wasn’t expected to make it out of high school, let alone to the top of soccer world. As part of a family of five, growing up in a one-bedroom apartment, he had to work for everything he had and sometimes that meant doing things he realized he didn’t want to do. It was soccer that saved him from a life on the street.

For the first time, Dwayne shares many heartbreaking, life-altering stories from his mischievous childhood, an upbringing that made him the hungry, successful, superstar athlete he became. His strong Caribbean heritage shaped the person and the player the world knows as a four-time MLS Cup champion, seven-time MLS All-Star, Canadian national team captain, and record goal-scorer. He helped put Canadian soccer on the map, and it’s clear that pursuit of greatness didn’t come without struggle, both on and off the field. Now, DeRo hopes to inspire, and train, the next great Canadian soccer star.

“Yo DeRo, I want to show you something. ”

He reached into his schoolbag and pulled out a gun.

“What the f-ck are you gonna do with that?” I asked him.

Real tough guys didn’t carry guns. Nobody in my crew had a gun, and none of the gangs we would scrap with did either. So who the hell did this guy think he was?

“I’ll shoot anybody that looks at me funny,” he joked.

I laughed at him as he squared up to me. I could see in his face that my attitude was really starting to piss him off.

“I ain’t scared of no tall kid with a fake gun!”

I wasn’t scared of anybody. He looked down at the gun in his hand and started chuckling to himself.

He looked up at me and pointed the gun to my head.

I laughed at him. He was testing me. I wasn't afraid, but I quickly realised the gun was real. It was cold against my forehead and I could feel how heavy it was.

When you’re that age you don't fear death. I was more afraid he thought he could bully me and get away with it.

“DeRo has made a major contribution to his community, on and off the soccer field. His passion for the game and personal development of youth is beyond inspirational. With my son, I've witnessed first-hand how Dero's energy and love for the game is infectious and encouraging. ” — Juno award-winning recording artist Maestro Fresh Wes

“DeRo was the player all the young kids wanted to be. He really took me under his wing and taught me a lot about how to be a player on and off the pitch. ” — Jonathan Osorio, Toronto FC & Canadian Men's National Team teammate

“De Rosario’s story is packed with danger, drama and deliverance. That makes DeRo: My Life an absorbing read. ” — MLS Soccer

“DeRo was the reason Canadians started watching MLS soccer. He was a human highlight reel, which made my job very easy. ” — James Sharman, sports broadcaster

“Dwayne and I go way back, to our days as young boys growing up in Scarborough. He is a great friend and tremendous athlete. I always knew he was going leave his mark on soccer in North America. Dwayne had an outstanding pro-career, winning multiple MLS Championships, and being named MVP of the league twice. Dwayne is a true Canadian legend, and what I admire the most is that he continues to give back to the kids in our community, helping to grow and inspire the next generation of athletes. ” — Jamal Magloire, 12 year NBA veteran and NBA champion assistant coach of the Toronto Raptors