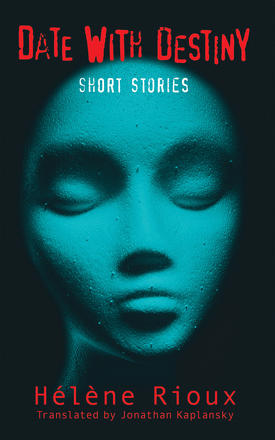 In this collection of ten short stories, the main characters -- women between the ages of 13 to 88 -- see death appear suddenly in their daily lives: in the pages of a novel written by a former lover, in a farewell letter abandoned on a living room coffee table, in the memory ... Read more

In this collection of ten short stories, the main characters -- women between the ages of 13 to 88 -- see death appear suddenly in their daily lives: in the pages of a novel written by a former lover, in a farewell letter abandoned on a living room coffee table, in the memory of a first love. Although disturbing in their truth, these stories are written in luminous prose that reconciles us -- almost -- with that ultimate rendezvous, our own Date With Destiny.

Hélène Rioux has published poetry, news articles, short stories, translations, and seven novels. She received the Prix France-Québec and the Prix ringuet de l’Académie des Lettres du Québec in 2008 for Mercredi soir au Bout du monde (translated as Wednesday Night at the End of the World), the Grand Prix littéraire du Journal de Montréal, and the Prix de la Société des Ecrivains canadiens for Chambre avec baignoire in 1992. She has been a finalist for the Governor General’s Literary Award five times. Her novels have been translated into English, Spanish, and Bulgarian. She has translated books into French by Elizabeth Hay, Yann Martel, Jeffrey Moore and Johanna Skibsrud. She lives in Montreal, Quebec.

Jonathan Kaplansky won a French Voices Award to translate Annie Ernaux’s Things Seen (La vie extérieure). He has translated works by Hélène Rioux, Hélène Dorion, Simon Brault, and Lise Tremblay. He has sat on the jury for the English-translation category of the Governor General’s Literary Awards and the John Glassco Prize.

each story evokes a wide variety of emotion, from sadness and sympathy, to hilarity and awkward discomfort. Chapters also feature thought-provoking quotes by poets, playwrights, and even rock star Jim Morrison—each a nod to the overall themes of the collection.

The author knows how to describe places and characters, making them live in an everyday-ness filled with music and reverie, as if to better lead her reader to the inevitable.

Ms. Rioux knows how to effectively capture people, things, cities. She has a powerful sense of precision, of the details that give these stories a cinematic flavour.

Other titles by Hélène Rioux

Other titles by Jonathan Kaplansky