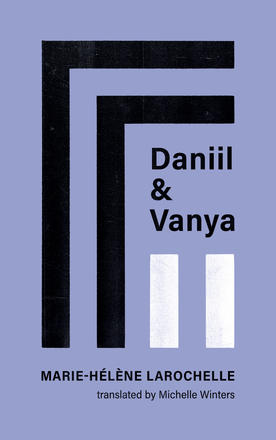 We Need to Talk About Kevin meets Goodnight Mommy in this outrageous modern family thriller.

Emma and Gregory have a perfect life—a gorgeous home, a successful design firm—except for their inability to start a family. Following a traumatic failed pregnancy, they decide to ... Read more

We Need to Talk About Kevin meets Goodnight Mommy in this outrageous modern family thriller.

Emma and Gregory have a perfect life—a gorgeous home, a successful design firm—except for their inability to start a family. Following a traumatic failed pregnancy, they decide to travel to Russia to adopt a pair of twin boys. From the moment they board the plane in St. Petersburg, the twins begin to demonstrate perverse behaviour that grows increasingly ominous, driving a wedge between Emma and Gregory, and alienating their friends and family. The two brothers show worrying signs of lack of empathy, and seem to leave behind a trail of disturbing incidents, and rumours persist as the boys grow into teenagers—even as Emma continues to cling to her dream of the perfect family. A dark, violent, and tense novel, Daniil and Vanya shows the bond between parent and child gone horribly awry.

A Book of the Year, Quill & Quire

"Readers will find themselves unable to look away. "—Quill & Quire

Michelle Winters is a writer, painter, and translator from Saint John, N.B., living in Toronto. Her written and visual work stretches the limits of the probable, explores the lushness of the industrial, and anthropomorphizes with gay abandon. Her stories have been published in THIS Magazine, Taddle Creek, Dragnet, and Matrix, and she was nominated for the 2011Journey Prize. I Am a Truck is her debut novel.

"Daniil and Vanya has none of the gentleness for which Canadian literature is sometimes known. It’s savage, direct, and shocking. Marie-Hélène Larochelle’s academic work focuses on violence and vulgarity in French literature, which she explores in this novel without the filter of Canadian politeness. The book goes in swinging and doesn’t stop until it’s gripped you with its haunting brutality to where you can’t look away. "—note from the translator Michelle Winters, Scotiabank Giller Prize-nominated author of I Am a Truck

"Not quite a horror nor a thriller, Daniil and Vanya is subtle in its uneasy sordidness… its disturbing nature is gripping, and will keep you hooked. "—Maisonneuve

"I am in awe of this book, of its power to agitate and affect me so deeply, it’s been over two weeks since I finished it, but I can’t forget about it. "—Anne Logan, I've Read This

“Marie-Hélène Larochelle’s story about a perfect-on-paper couple who adopt Russian twins is its own unique nightmare. In Michelle Winters’s translation, Larochelle’s unadorned language reads like a lengthy confession, or perhaps a defence, building suspense to its inevitable conclusion. As author Casey Plett wrote in her starred Q&Q review, “The tensions of the book play on how—not if—it’s all going to hell. ”—Books of the Year, Quill & Quire

"The sense of dread and horror is physically palpable, and the careful stagecraft of the writing. .. is precisely calibrated. Readers will find themselves unable to look away. .. the book is a remarkable achievement. "—Quill & Quire, starred review

Other titles by Michelle Winters