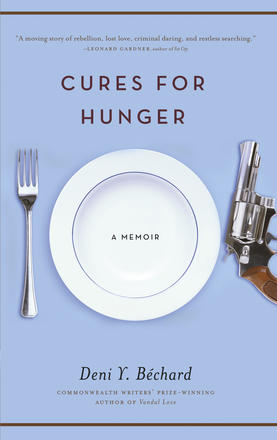 Growing up in rural British Columbia, Deni Béchard believes his charismatic father is infallible. Wild, unpredictable, even dangerous, André is worshipped by his young son, who believes that his father can do no wrong.

When the boy discovers his father's true identity — ... Read more

Growing up in rural British Columbia, Deni Béchard believes his charismatic father is infallible. Wild, unpredictable, even dangerous, André is worshipped by his young son, who believes that his father can do no wrong.

When the boy discovers his father's true identity — and the crime sprees and prison sentences attached to it — his imagination is set on fire. Before long, he is imagining himself as a character in one of his father's stories. At once attracted and repelled, Deni can't escape the sense that his father's life holds the key to understanding himself and to making sense of his own passions, aversions, and motivations.

Eventually he finds himself snared in the controlling impulses of his mysterious father and increasingly obsessed by his father's own muted recollections of the childhood he'd fled long ago — his birth to a poor family in the Gaspé, his hunger for excitement and a better life, his crimes spreading out from Québec to the American west, his identity as ephemeral as the wind.

Cures for Hunger is a gripping memoir of a young man's quest to understand the hunger that burns for the unattainable, the story of the heart of a boy looking for the soul of a man and the darkness that he finds within.

Deni Ellis Béchard is a novelist, journalist, and photographer. He is the author of four books of non-fiction, including Cures for Hunger, recently released in trade paper, and three novels: Vandal Love, winner of the Commonwealth Writers’ Prize for Best First Book; Into the Sun, winner of the Midwest Book Award for literary fiction; and White.

"A moving story of rebellion, lost love, criminal daring, and restless searching. Driven above all by the need to grasp his father's secrets, Béchard has written his narrative in skillful, resonant prose graced with a subtle tone of obsession and longing. "

"Béchard's memoir is alternately funny and poignant, with a meditative, leisurely pace. . .. embedded with insights. The complexities of hunger are the core of this story. Hunger is not simply a clawing emptiness in the belly: It is the yearning ‘for truth, for love, for a single thing that we can trust’ it is ‘the perfect pleasure of wanting. ’. .. Ultimately for Béchard, writing is freedom and Cures for Hunger is both a journey and a coming home. "

"Cures for Hunger illustrates the ways in which storytelling can act as a means of self-discovery. .. much more than a memoir of youthful misadventure, though it contains plenty of that. It's also an exploration of the oppression of lineage, of familial duty, wanderlust, and perennial dissatisfaction, and the most American theme of them all: personal reinvention. "

"A spare, raw, haunting memoir about living in the shadow of an enigmatic man. . .. Deni Y. Béchard is a writer to watch. "

"A poignant but rigorously unsentimental account of hard-won maturity. "

"Ragged and rough on the surface, tender and aching underneath, Bouchard's writing style reflects what may be the real subject of this memoir; his own youthful bravado. "

"You haven't read a story like this one, even if your father was the kind of magnificent scoundrel you only find in Russian novels. Béchard is the rare writer who knows the secret to telling the true story. Just because the end is clear doesn't mean the bets are off. "

"Béchard writes that prison taught his father 'the nature of the self, the way it can be shaped and hardened. ' As in a great novel, this darkly comic and lyrical memoir demonstrates the shaping of its author, who suffers the wreckage of his father's life, yet manages to salvage all the beauty of its desperate freedoms. Béchard's poetic gifts give voice to the outsiders of society, and make them glow with humanity and love. "

"Béchard powerfully evokes the ever-present tension between the author and his parents. .. as well as his own struggle to emulate and escape his father. .. Béchard's story is also one of personal discovery, and a teasing out of the function of memory: what it keeps, what it loses, and what it saves. "

"Cures for Hunger is a poignant adventure story with a mystery. .. But it is also, perhaps even more so, the story of an artist coming of age. Readers will be reminded of James Joyce's Portrait of the Artist as a Young Man. "

"This powerful and haunting memoir is a must-read for anyone who has struggled to uncover their identity within the shadow of a parent. In exquisitely sharp prose, Béchard renders his attempts to understand his father's mysterious existence. This book is huge and achingly true. "

"A coming of age story with rare and loving insights into the vulnerable hearts of men and boys — and the women that help shape them. "

"Captivating and poignant memoir. .. Deni Y. Béchard's prose brims with nuance as his characters move across a continent and leave the reader richer for accompanying them. . .. a must-read for anyone who has mused about the ways in which parents' actions can affect their children. .. a heartfelt depiction of the long road taken to a better understanding of the complexity of the parent-child bond. "

Other titles by Deni Ellis Béchard