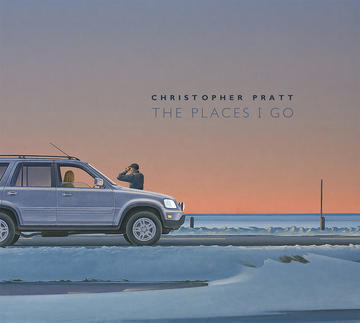 "When you revisit a place that matters to you for the first time in a long time it is a rich, spiritual experience, but if you then revisit such a place too frequently it loses some of its power. The power lies in the absences. " — Christopher Pratt

Widely considered to be ... Read more

"When you revisit a place that matters to you for the first time in a long time it is a rich, spiritual experience, but if you then revisit such a place too frequently it loses some of its power. The power lies in the absences. " — Christopher Pratt

Widely considered to be one of Canada's most prominent and celebrated painters, Christopher Pratt stands with other great artists — Alex Colville, Lawren P. Harris, Jean Paul Lemieux, and Lionel LeMoine Fitzgerald — who influenced him and the way he represents the land. But Pratt's greatest influence is perhaps the geography of his home province of Newfoundland.

The Places I Go focuses on Pratt's paintings of the last decade, each revealing his observations of a place changing even as it endures. Beginning in 2005, Pratt started to travel by car to "everywhere I've ever been," recording his travels in his "car books," in his memory, and, ultimately, in his paintings.

The paintings that resulted from this journey are vintage Pratt. They are also acts of remembering, of recording, of becoming the observer of transformation. Standing on "the littoral," looking toward the horizon, Pratt casts his eye on the perpetual presence of the ocean. Yet, his images — houses, spillways, bridges, and boats — also pay homage to the right angles of humanity. Buried in snow, at rest in a dock, they celebrate the built form.

This exquisite book, featuring essays by exhibition curator Mireille Eagan, archivist Larry Dohey, and Pratt himself, examines Pratt's interest in and preoccupation with transformation, the act of remembering, and his abstractions of the ineffable.

Mireille Eagan is curator of contemporary art at The Rooms Provincial Art Gallery, St. John's. Prior to this, she was curator at the Confederation Centre Art Gallery in Charlottetown, Prince Edward Island. Eagan has lectured nationally on Canadian art and has published several catalogues and essays on Canadian artists. She has a special interest in promoting the activities of artists based in the Atlantic provinces.

Larry Dohey is Manager of Collections and Projects at The Rooms Provincial Archives Division.

Christopher Pratt (b. December 9, 1935) is one of Canada's most prominent painters and printmakers. After studies at the Glasgow School of Art, Scotland (1957-1959), Pratt completed a bachelor of fine arts at Mount Allison University in New Brunswick in 1961. Pratt's first solo exhibition took place at the Memorial University Art Gallery in St. John's in 1965. Since then, Pratt has exhibited extensively both nationally and internationally, and is the subject of many substantial publications. He is a member of the Royal Canadian Academy of Arts (ARCA), a member of the Canadian Society of Graphic Art, and a Companion of the Order of Canada. In 1980, Pratt designed the Provincial Flag of Newfoundland and Labrador. He lives in Newfoundland in St. Mary's Bay along the Salmonier River.

"There’s a spaciousness to the book’s horizontal format and sophisticated design, free from distracting elements, that compliments Pratt’s controlled and measured realism and makes viewing his work on its pages as close to a gallery experience as possible. "

Other titles by Mireille Eagan