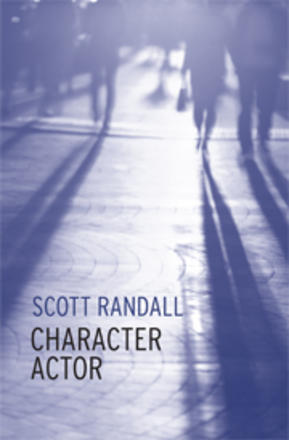 In Character Actor, his second collection of short stories, Scott Randall once again gets right to the heart of ordinary characters, not the brilliantly burning stars, but the kind of people we see every day, all around us. In story after story, Randall finds the perfect pitch, ... Read more

In Character Actor, his second collection of short stories, Scott Randall once again gets right to the heart of ordinary characters, not the brilliantly burning stars, but the kind of people we see every day, all around us. In story after story, Randall finds the perfect pitch, from the sly, deadly determination of the ambitious company man who will not be outdone by the threatening new talent, to the law-school dropout who becomes more and more isolated in his shame, his only connection to the academic world the labs where he volunteers for psychology experiments. In an extended story suite, an ordinary dysfunctional family comes undone after the death of a child, each member indelibly marked by the loss, each moving through grief to something beyond. In another, a young Chinese woman prepares to leave for Canada, where she will study medicine; meanwhile, a young Canadian man is involved in his own preparation for medical school. The inevitability of their meeting is obvious; the question is whether they will recognize the necessity of their connection. In the title story, the unsung are honoured by two friends who strive to maintain their bond through the years, the deaths of the would-be-forgotten character actors thrown into relief against the backdrop of their own lives.

Scott Randall has previously published two short story collections: Last Chance to Renew and Character Actor. The title story from Last Chance to Renew was broadcast on CBC Radio's Between the Covers, and Character Actor was shortlisted for the fiction category of the Ottawa Book Award. He has been twice nominated for the Journey Prize, and his fiction has appeared in numerous literary journals such as The Antigonish Review, Event Magazine, The Malahat Review, The Dalhousie Review, and The New Quarterly. He has taught Literature and Writing at Seneca College, York University, Concordia University, and Algonquin College. He currently lives in Ottawa with his wife and daughter.

from "Character Actor""I was sitting in the Mayfair Centre at lunch. "Oliver calls me from the other side of the country whenever a character actor dies. "The food court has these this video projection screens," he says. "They run sitcom bloopers and practical joke reels. Didn't have a book with me so I was watching them on my break. "Burgess Meredith died last week so I've been expecting Oliver's call. We don't talk about the death right off because there are, of course, matters from our own lives to cover. I tell him I have a temporary job substituting for the Arts editor at the local paper because the guy came down with gout. He tells me he moved from his job as a dishwasher to farm work. He spent a whole day plucking feathers off dead geese, quit and went back to the restaurant. I don't tell him my wife is two months pregnant, because as she reminded me when she passed the phone, we're keeping the news to ourselves until after the first trimester. "And the screens play news clips, which never seem to include much actual news, more just human interest stories. "We started these calls after our last year of school, after I moved to Toronto, Kingston, and then Belleville for work and Oliver returned to British Columbia. In school, we shared a number of professors, but our agreed-upon favourite was our American Literature professor, John Neill. Dr. Neill wasn't the kind of professor who went in for tangents or anecdotes usually, but for whatever reason, he opened his As I Lay Dying lecture with a story. On the morning he was to be married, Dr. Neill went to get his hair cut by the same barber he'd been going to for ten years. He didn't often accept his barber's offer for a shave, but he did that day. It was a special day, after all. And when his face was lathered, and the barber drew back the chair to the proper angle, Dr. Neill heard the news come over the radio and learned that William Faulkner had died. The barber didn't seem overly troubled. Oliver tells me the food court news items usually include stock reports and obituaries. "Yes," I say. We had dorm rooms beside each other and walked to the dining hall together most nights. After Neill's Faulkner story, I mentioned how bloody depressing it must be when your idols die. I think I listed a dozen writers, actors, and musicians whose future deaths would sadden me. Oliver agreed. We continued walking without speaking for a minute or so, and then he added that it had to be worse when a character actor died. The kind of artist whose face most people knew but couldn't connect to a name. Who grieved over the men and women that played the best friends, second messengers, army nurses, hit men, and university professors? All because of an unfortunate height, weight or distinct feature, these people were forgotten and put into those magazine sidebars in vulgar in memory of and no longer with us magazine articles. "A mall food court," Oliver finishes. "Not the most dignified setting for sad news. ""No," I say. When I heard the news about Burgess Meredith, I was waiting for a night flight in the Winnipeg International Airport. On my way back from a job interview for a permanent position that eventually went to someone else. I was tired and gloomy in the way one gets when traveling alone. I couldn't even collect enough enthusiasm to read the entertainment magazine I¹d bought to pass the time. The flight was delayed, it was dark out, and when I learned the news from a television monitor mounted overhead, I felt like I had a concrete reason to be sad. "A more appropriate setting," Oliver says. "Yes. ""Who the hell gets gout?" — My daughter is born the same week JT Walsh dies, but when I call Victoria, an automated voice tells me the number is no longer in service. This has happened before, but I have his parents' number and can track Oliver down through them. I do and he's happy to hear from me. He's taking night classes in TESL and thinking about an overseas job. Maybe not, though. He tells me it's funny that a four-week certificate might take him farther than a four-year degree. "It's not so funny," I say. I tell him my news — seven pounds and eight ounces — and we don't get around to JT Walsh until the end of the call. "Did you hear?" he asks. "Yes. " —The next year, Oliver's father has a heart attack the same month as Brion James does, and two years later, his mother surrenders to Alzheimer's around the same time as Ray Walston dies of lupus. Over the phone, I tell Oliver that my daughter has started junior kindergarten and hope to brighten his mood. When Richard Farnsworth takes his life, I'm depressed all morning and would like to talk to my friend, but the number I have has been disconnected and I don't know of any way to track Oliver down. —This morning at breakfast, I read that Christopher Penn passed away from an enlarged heart, and it's a cause of death that I would quote to Oliver, but we haven't spoken in over five years. As I fold the paper, my daughter asks me if we can watch The Wizard of Oz, a video we've watched countless times together. She settles onto the sofa between my wife and me, and as the film begins I point to Margaret Hamilton¹s credit. "Pay attention to that actress," I tell my daughter. "She plays Miss Gulch, the Wicked Witch of the West, and the Wicked Witch of the East. "

“ Scott Randall, an Ottawa-based literary writer, whose first collection of short stories was highly regarded by critics, has now produced a second. In Character Actor, published by the Winnipeg house Signature Editions, Randall's strengths are apparent and immediate. ... Randall makes the reader believe that everyone has a story worth telling, not as a cliché, but as an act of faith. His directness, simplicity and ability to make us both recognize and empathize with his characters from children to the elderly, with special attention paid to those in late adolescence, is sustained and, in the case of a few stories, masterly. Take But His Face Rings a Bell. It is narrated by a university dropout who hangs around the university library, taking part in pointless research questionnaires, making enough to get by, and becoming more isolated each day from his already narrow world. One day he reads about the history secretary whose accident caused him to lose his short-term memory. This makes an impression: "Why this memory should have stayed with me as strongly as it did, I am unsure. " Later he takes part in a recognition experiment and doesn't do well. The researcher tells him she is doing a dissertation on "associative memories. " "It had to do with the ability to recall meaningful memories versus the ability to recall insignificant details. I nodded as if I understood and no further explanation was necessary. "This is at the heart of Randall's work. Each story deals with how memory shapes our emotional life, and our relationships, both close and casual. ”—The Winnipeg Free Press

Other titles by Scott Randall