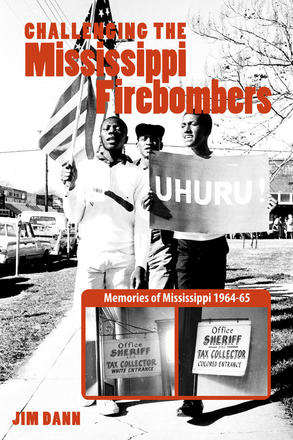 In June 1964, courageous young civil rights workers risked their lives in the face of violence, intimidation, illegal arrests, and racism to register as many African American voters as possible in Mississippi, which had historically excluded most blacks from voting. With a firsthand ... Read more

In June 1964, courageous young civil rights workers risked their lives in the face of violence, intimidation, illegal arrests, and racism to register as many African American voters as possible in Mississippi, which had historically excluded most blacks from voting. With a firsthand account of the details and thoughtful descriptions of key people on the front lines, including Fannie Lou Hamer, Charles McLaurin, John Harris, Irene McGruder, and many more, author Jim Dann brings that historic period back to life. He places those 15 months in Mississippi—known as Freedom Summer—in the overall history of the struggle of African Americans for freedom, equality, and democratic rights in the South, the country, and throughout the world. Fraught with lessons drawn from those experiences, Challenging the Mississippi Firebombers is a valuable contribution to understanding and advancing civil rights struggles in addition to being a fascinating and engrossing story of a pivotal moment in the mid-20th-century United States.

This accessible narrative offers an important eye-opener for today's students and general readers. [. ..] Dann's simple yet gripping account describes the violent response of police and white mobs to the efforts of black and white civil rights workers and the refusal of firemen to intervene when schools and homes were burned to the ground. Dann draws on his memories as well as newspaper accounts, press releases, reports, and later historical studies. "  —Book News

"Jim Dann does not present himself as a hero, or even as having been courageous. Rather he portrays himself as a young person who was committed to working with others, some of those who were whites and blacks from other parts of the United States, [. ..]  Jim Dann has enriched us all by chronicling his memories [. ..]" —Rosemary Lévy Zumwalt, Dean of the College Emerita and Professor Emerita of Anthropology at Agnes Scott College

“Challenging the Mississippi Firebombers offers an uncompromised glimpse into. . . . the Civil Rights era. . . . it is an imperative dissertation — one that should never be forgotten. . . . a meticulous, second to none look. . . . Without Dann’s (and the countless other students’) contributions, Freedom Summer would have just been an idea forgotten. ”  —Esther Callens, Birmingham Times

"the South was a racially stratified society whose violently totalitarian state governments conspired to deny basic rights of African Americans. . .. Dann takes us into that world, relating the frequent arrests and brutal KKK counter-reaction that characterized that great struggle. [. ..] This book is a reminder that the situation in the past was worse; and the reality of progress in the past offers hope of progress in the future. " —Publishers Weekly

“I find Jim Dann in a lot of my sketches from the summer. It’s not surprising. Built like a welterweight, tough and fearless as any of the workers that summer, he was in the middle of every confrontation and every police bust. Nothing seemed to cow him, and his righteous wrath could be turned on a sheriff, a policeman, or a hostile redneck. ”  —Tracy Sugarman, author, We Had Sneakers, They Had Guns

"Of all the Southern states, Mississippi was arguably the worst. . .. His book details the struggle to convince the whites to share power, a development the White Citizen Councils were so set against they were willing to kill. [. ..] Dann takes us into that world, relating the frequent arrests and brutal KKK counter-reaction that characterized that great struggle. " —Publishers Weekly

Other titles by John Harris