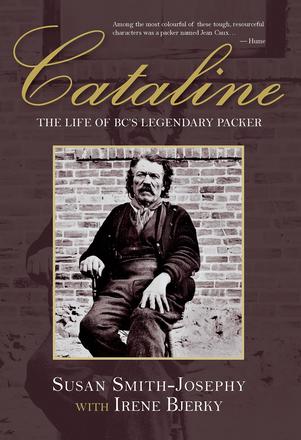 In the early days of British Columbia, pack trains of horses or mules were a lifeline for the early pioneer population. Explorers, trappers, traders, miners, merchants, workers and settlers and relied on them for the materials needed to live and work. Packers were also vital to the building of railways, roads, and telegraph lines. Pack mule train drivers followed trails created over the years by the First Nations people and later by the fur trading companies, to travel between settlements in the rugged backcountry. The most famous of all the men who ran the pack trains was Jean Caux, who would enter British Columbia’s history as the legendary packer “Cataline”.

Cataline came to North America from Southern France with his brother, eventually landing in British Columbia in 1858. Having learned the trade from Mexican packers in California and Washington, Cataline established a pack train operation that grew to be one of the most well-known and reliable in the province, including securing contracts with the government and Hudson’s Bay Company.

Cataline witnessed many of the pioneering events that shaped the province, including the Fraser River Gold Rush of 1858, the Cariboo Gold Rush of 1862, the coming of the railway to Ashcroft in 1886, and the Grand Trunk Pacific to Hazelton in 1912. Cataline also crossed paths with significant historical figures such as Judge Matthew Begbie, famed anthropologist James Teit, and Amelia York (née Paul, daughter of Chief Kowpelst (Telxkn) of the Nlaka’pamux people of Spuzzum), a world-famous First Nations basketmaker, with whom Cataline had two children.

In Cataline, the legend and life of the man has been remembered in the words of his friends, his family, and those who chronicled the times and development of the province.

"Long before there were railways, supertankers or jumbo jets to enmesh British Columbia in world commerce, freight moved on men's backs, by mule train, by tooth-rattling buckboard and eventually by a technological wonder--the stage coach. Furs and gold may dominate BC's modern creation narrative, but it was the pack train that made it possible. It carried supplies and trade goods to the mines and trapping outposts and back-hauled bullion and furs to market. Among the most colourful of these tough, resourceful characters was a packer named Jean Caux. Nicknamed Cataline by his gold rush clients, his story is the story of how the province invented itself. It's a tale of First Nations in collision with globalization, of dashing adventurers and cruel outlaws, ruthless entrepreneurs and startling visionaries. Cataline: The Life of BC's Legendary Packer is a remarkable window into that astonishing period of the province's history, and what a story it is!"

"A very readable and lively account of the life and work of Jean (Cataline) Caux. "

--Andrea Laforet, retired director of Ethnology and Cultural Studies at the Canadian Museum of History, and co-author of Spuzzum: Fraser Canyon Histories, 1808-1939 with Annie York