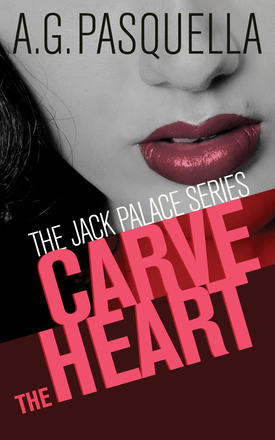 Ex-con Jack Palace returns in a world of violence, heartbreak, and revenge.

Cassandra, the woman who broke Jack Palace’s heart, is suddenly back in his life. She owes $600,000 to a brutal gangster who has threatened her life, and she needs Jack’s help. Things start to get ... Read more

Ex-con Jack Palace returns in a world of violence, heartbreak, and revenge.

Cassandra, the woman who broke Jack Palace’s heart, is suddenly back in his life. She owes $600,000 to a brutal gangster who has threatened her life, and she needs Jack’s help. Things start to get violent when Cassandra suddenly disappears … but not everyone believes she's in danger. Is Jack being set up?

Bikers, mobsters, and strippers collide as Jack storms the mean streets of Toronto searching for Cassandra. To find her, he must rip open old wounds and confront new enemies. But as loyalties falter and secrets are revealed, Jack begins to wonder who he can really trust. If he doesn’t figure it out fast, he — and everyone he cares about — could end up dead.

Real crime isn’t like it is in the movies. It’s not that glamorous. No one’s zipping around the Italiancountryside in a little sports car loaded with gold. Real crime is stupid, ugly, and violent.

The man in the alley had a woman pinned against a jet-black Cadillac Escalade. There was another man inthe driver’s seat. Both of the men had slicked-back dark hair that was shaved on the sides. The man pinning the woman was wearing a dark-blue track suit with white piping along the legs. He had a shitty goatee sprouting from his chin like moss. The woman was taller than the man. She was wearing a black leather skirt and a white jacket. Her brown hair was pulled back in a sleek, long ponytail. Her eyes were red like she’d been crying. The man was muttering something and she was shaking her head “no. ” I saw the man’s face curdle. He raised his hand to slap her.

Startled, the man turned toward me. Then he turned back to the woman. “Denise, I’m sorry. Baby, come on. I’m sorry. ”

Denise shook off the man and stepped away from the car. Her heels click-clacked on the concrete. Shemuttered, “Call the police,” as she walked away.

I kept my eyes on the man. I could see his buddy peering at me in the driver’s side mirror. The man withthe mossy goatee tilted his chin at me. “You gonna call the cops?”

The man smirked. I hit him so hard his head snapped back and cracked against the car window.

The guy in the driver’s seat fumbled with the door. I let him open it, then slammed it on him, hard. He yowled. I threw the door open and yanked the guy out. He blinked when he saw his buddy stretched out on the concrete. I hit him in the stomach and he doubled over, gasping.

“You watch for the cops while your buddy beats up women, is that it?”

The driver groaned, still doubled up. I could see a bald patch under his gel-slick hair. These guys were both wearing enough aftershave to start a small fire.

Coughing, the driver slapped his wallet into my hand. There was probably about three hundred bucks in crisp green twenties inside. I ignored the money and pulled out his driver’s licence. I made sure he saw me staring at his name, then I stuffed the licence back in the wallet and dropped it at his feet. “Well, Dimitri, now I know where you live. If you and Captain Asshole here” — I gave the man on the ground a nudge with the steel toe of my boot, making him grunt — “if you guys ever bother anyone else, I’ll come looking for you. ” I reached into my jacket and pulled out a knife. I held it to Dimitri’sthroat, the blade glittering in the light. “Understand?”

I pointed to the man on the ground. “Go on, get your garbage and get the fuck out of here. ”

I tucked the knife back into its sheath beneath my jacket and strode down the alley. I stood watching asthe driver stuffed the short man with the mossy goatee into the back seat of the Escalade. Then the driver pulled himself back into the driver’s seat and the vehicle peeled out of the alley. All aboard the Douche Express, last stop: who the fuck cares?

A rusty door opened into the alley. My buddy Eddie Yao stood there in his charcoal-grey pinstripe suit, achrome . 45 in his hand. “All good?”

I shook my head. “Assholes like that don’t learn. Do me a favour, will ya? Give the cops a call. ”Eddie blinked. “What?”

“She asked me to call. ” I shrugged. “You still have a guy at the precinct, right?”Eddie nodded. “I’ll take care of it. ” His eyes scanned the alley and then he beckoned me closer. “Come ondown. ”

“Another time. I got Melody upstairs. ” Melody and I had been drinking and getting frisky when the Escalade bros started roughing up the woman. You never treat a woman like that, especially not in the alley behind my office.

Eddie tucked his . 45 back into the shoulder holster beneath his suit jacket. He didn’t smile, but his eyes twinkled. “Trust me, Jack. You’re going to want to see this. ”

I stepped through the doorway, and the heavy steel door slammed closed.

I followed Eddie down a set of dingy stairs. It looked like the beginning of every horror movie ever. All itneeded was a few bloody handprints on the wall. At the bottom was another door. Standing in front of the door was Eddie’s guy Josh, wearing a black suit that seemed to blend into the shadows. Josh nodded his head and opened the door.

Once we passed through, the whole horror-show vibe disappeared. This was Eddie’s basement casino, and it was classy, man, classy. Deep-maroon walls and polished oak chairs. Croupiers and dealers in maroon vests and black bowties. The gamblers were a different story. Eddie’s place attracted them all: the whales, the sharks, the donkeys, and the grinders. Everyone was trying to turn cards into money. An acne-scarred man with mirrored sunglasses and a straw cowboy hat tapped the felt at one of the blackjack tables, calling for one more card. As Eddie and I walked past the tables, no one looked up.

Eddie opened the door to his office and grinned. “After you. ”

“I hate it when you’re all mysterious and shit. ”

Eddie’s eyes twinkled again. He gestured toward the open door.

I stepped inside and froze. There was a beautiful woman sitting behind Eddie’s desk. She had pale skin,almond eyes, and jet-black hair. She was wearing a black turtleneck and a light-grey blazer. Her silver earrings caught the light as she turned toward the door. We made eye contact. She didn’t smile.

I hadn’t seen her in years — ten, to be exact. We dated, I loved her, she left me. It wasn’t quite that simple, but that was the gist of it.

Eddie gave the red leather chair in front of his desk a tug and a pat. “Have a seat, Jack. Can I get you guysanything? Cassie, another Scotch?”

She nodded. I sat down in the chair. The cushion deflated under my weight. “I’ll have a Scotch, too. ” Istared at Eddie, trying to beam thoughts into his brain. Goddamn, Eddie. Warn a fella, would ya?Eddie just smiled and walked out the door.

Cassandra stared at me from across Eddie’s desk. I stared back. The clock on the wall tick-tocked. Finally, she sighed. “I’ll get right to it. Jack, I need your help. ”

Getting impatient with hard-boiled conventions? Try this.

The writing here is very impressive: gritty and profane but also (in the right places) tender and quite moving.

Pasquella vividly captures the dog-eat-dog existence of the Toronto underworld.

Sharply written, suspenseful and often funny as hell, Carve the Heart smashes its way through the streets of a noirishly entertaining Toronto the Bad like an out-of-control car chase. This is a book up to its shapely ass in double crosses, hot stakes poker games, rescue plans that go sideways, broken noses, strippers, bikers, drug heists, hot sex, plot twists and bottomless tumblers of smoky Scotch sipped in an illegal casino tucked away somewhere in Kensington Market. Can’t wait to see what Jack gets up to in the next installment. In the mean time, I’m going to nose around to see if I can locate that underground casino.