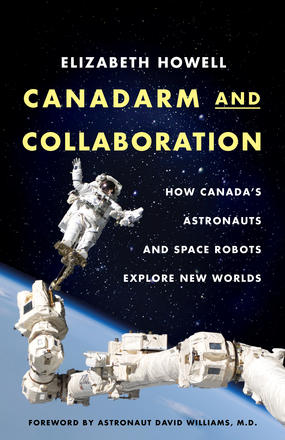 With interviews from Chris Hadfield and Marc Garneau, the tale of Canada’s involvement in international space exploration from the 1960s to the present day

Canada is a small but mighty power in space exploration. After providing the Canadarm robotic arm for the space shuttle ... Read more

With interviews from Chris Hadfield and Marc Garneau, the tale of Canada’s involvement in international space exploration from the 1960s to the present day

Canada is a small but mighty power in space exploration. After providing the Canadarm robotic arm for the space shuttle in 1981, Canada received an invitation to start an astronaut program — a program that quickly let its people accumulate skill and prestige. Canadian astronauts have since commanded the International Space Station, flown as co-pilots on spacecraft, and even held senior roles within NASA.

This book traces how Canada grew from small beginnings into a major player in international space policy. You will hear about Canada’s space program from the words of its astronauts, from Canadian celebrity Chris Hadfield to Liberal cabinet minister Marc Garneau to Governor General Julie Payette. You will experience the excitement and challenges of reporting on a rocket launch in Kazakhstan, as Canada sent its latest astronaut to space in preparation for possible moon missions in the 2020s. And you will learn from the people who work behind the scenes on Canadian space technology and space policy about why we are doing this — and what we plan to do next.

While Parazynski had dozens of hours of spacewalking experience and the ground crew trusted his work, the Canadian Space Agency’s Ken Podwalski still remembers the tension while watching the astronaut run through the procedures that his team helped develop.

“You get into this remarkable complicated [situation] . . . everything piling together in terms of how bad a situation it is, but then look at the eloquence of the solution,” he said. Those elements were so simple that even a teenager could grasp them: Canadarm2, a mobile extender, cufflinks, and a hard-working team. “The way that all worked cooperatively together, it’s just almost a fascinating . . . juxtaposition. I hate to use a fancy word like that, but it really kind of reflects one off the other,” Podwalski said.

And it worked. Did it ever work. Not only did the team save the solar array, but incredibly, this fix — thrown together over 72 gruelling hours in Montreal and Houston and other space station centre locations — was still holding together beautifully nine years later, according to a photo posted on Twitter that Parazynski commented on. “Our repairs are still under warranty,” joked the retired astronaut in 2016.

“Illustrates how the country has maintained a human spaceflight program for several decades through a combination of technological specialization — Canadarm and its successors — and collaboration with the United States. ” — The Space Review

“Be sure to read Canadarm and Collaboration for a fascinating look at Canada's evolving space program and its past, present and possible future. ” — Universe Today