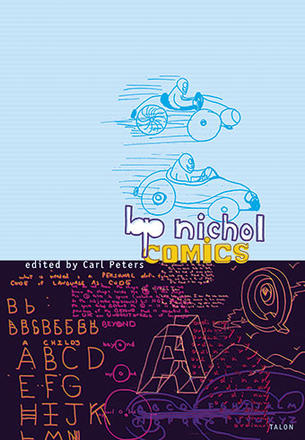 The scope, innovation and depth (down to the heart) of bpNichol’s writing makes him one of the most important writers in English of the 20th century. He is widely known for his research into genres as diverse as the lyric, the long poem, sound poetry, concrete poetry, critical ... Read more

The scope, innovation and depth (down to the heart) of bpNichol’s writing makes him one of the most important writers in English of the 20th century. He is widely known for his research into genres as diverse as the lyric, the long poem, sound poetry, concrete poetry, critical theory and now, with the publication of bpNichol Comics, we can even add the comic strip to this impressive list.
Carl Peters has put together this major collection of Nichol’s comics from 1960 to 1980, which frame characters ranging from Milt the Morph, to Bob de Cat, Lonely Fred and Rover Rawshanks: rich examples of Nichol’s attempts to explode conventional syntax, narrative structure, lyric self-centredness—indeed all of the conventions of modernist art and art making. And with the inclusion of a remarkable selection of previously unpublished letters and essays around the comics themselves, Peters shows us that Nichol’s comics informed not only his own work in other genres, but the work of other writers as well. But, in as much as Nichol’s comics bring us to a deeper understanding of his poetics, his comics also remind us that, as Robin Blaser writes, “the truth is laughter. ” bpNichol Comics is not only for scholars, poets, cartoonists, artists, animators, writers and readers; it is for the inquisitive and adventurous child in all of us.

bp Nichol was one of Canada’s most challenging and innovative poets. His writing spans a remarkable range—from concise allegories on a single letter, on through to sound poetry, fiction, theoretical investigations and culminating in his nine-volume poem The Martyrology. Meanwhile: The Critical Writings of bpNichol (2001), bpNichol Comics (2001), Rational Geomancy (1992) and Selected Writing: As Elected (1980) are also available from Talonbooks.

Carl Peters
Carl Peters wrote his master's thesis on bp Nichol and the Kabbalah and his doctoral thesis on Nichol and the practice of the sacred. His critical study of bill bissett was published by Talonbooks in the spring of 2011. Dr. Peters teaches poetics and avant-garde art at the University of the Fraser Valley.

bill bissett garnered international attention in the 1960s as a pre-eminent figure of the counterculture movement in Canada and the United Kingdom. In 1964, he founded blewointment press, which published the works of bpNichol and Steve McCaffery, among others.

bissett’s charged readings, which never fail to amaze his audiences, incorporate sound poetry, chanting and singing, the verve of which is only matched by his prolific writing career—more than seventy books of bissett’s poetry have been published.

A pioneer of sound, visual and performance poetry—eschewing the artificial hierarchies of meaning and the privileging of things (“proper” nouns) over actions imposed on language by capital letters; the metric limitations imposed on the possibilities of expression by punctuation; and the illusion of formal transparency imposed on the written word by standard (rather than phonetic) spelling—bissett composes his poems as scripts for pure performance and has consistently worked to extend the boundaries of language and visual image, honing a synthesis of the two in the medium of concrete poetry.

Whether paying tribute to his hometown lunaria or exercising his native tongue dissent, bissett continues to dance upon upon the cutting edge of poetics and performance works.

bill bissett was recently a featured poet on the Heart of a Poet series, produced in conjunction with Bravo! TV.

“Nichol engages in visual wordplay and defies the conventional restraints of space and structure in comic books. ”
– National Post

Other titles by Carl Peters