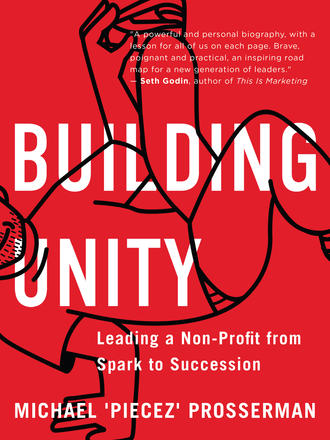 Build an organization that is growth-minded, values-based, and innovative using the six steps to “responsible impact. ”

At age 16, Michael ‘Piecez’ Prosserman, a professional b-boy (breakdancer), completed a school project that would grow to become a hip-hop-inspired ... Read more

Build an organization that is growth-minded, values-based, and innovative using the six steps to “responsible impact. ”

At age 16, Michael ‘Piecez’ Prosserman, a professional b-boy (breakdancer), completed a school project that would grow to become a hip-hop-inspired mental health charity with global reach. Through a process of continuous discovery and reflection, Prosserman and his team grew UNITY to the point where it benefitted over a quarter of a million young people. In Building Unity, Prosserman breaks down the six steps to discovering “responsible impact” and building an organization that is growth-minded, values-based, and reflective of the needs of its community. Using stories of his own evolution, learning, and growth as a leader over 15 years, Prosserman parallels the creativity found in breakdancing with the innovation needed to build a sustainable non-profit.

Michael ‘Piecez’ Prosserman found his passion for break­dancing at a very young age. By the time he was three, Michael was already standing on his head while watching Saturday morning cartoons. Michael is a university instructor, mental health advocate, and professional speaker, specializing in start-ups, team culture, fundraising, and succession. He is the founder of UNITY Charity and EPIC Leadership. He lives in Toronto, Ontario.

Like I said, I was a quiet kid. Even to this day, when I’m angry, I want to beat up the floor. Stress provides a creative opportunity for me: it fuels my dance. The biggest challenges in my life have given rise to new angles and perspectives to fuel my creativity. It’s when I have the most to share, something to say, but words can’t express the story. It’s the raw expression birthed from experiences translated through movement. I express, create, and heal in order to better understand and communicate my experiences. I turn pain into power.

In 2003, I had an idea. I wanted to share hip hop as a tool to create social change. Hip hop was such a powerful instrument in my life. It was an expression, an outlet, a voice, a platform, a community. In grade eleven, as part of a group project in my entrepreneurship class, our teacher, Mr. Izumi, gave us a practical real-world assignment. We had to write a business plan for an entrepreneurial venture that we would have to execute to raise money for a local charity of our choice. Our group ran an event we called “Hip Hop Away From Violence. ” We donated the proceeds from the event to the charity Leave Out ViolencE (LOVE), a charity that works with youth in underserved communities, providing them outlets and alternatives to violence through photojournalism.

The first event was a miserable failure. Everything that could go wrong went wrong. We needed to sell enough tickets to fill the school gym, which held up to four hundred students. A few days before the event, we had only sold around thirty tickets. We decided to move to a smaller venue. The only venue we could get permission from the principal to use at the last minute was the cafeteria during lunch hour. This changed the entire dynamic of the event. It was terrible. No one paid attention. All the performers felt disrespected. Luckily, the charity we were working with cancelled their guest speaker, because it would have been an embarrassment. On top of everything else, a few of our best performers dropped out. We went through the motions and ran the event the best we could, but it was a disaster. I knew we could do better. We had to give it another shot. I still believed.

In grade twelve, I was elected president of the student council and decided our big event that year would be Hip Hop Away From Violence. This time, we started preparing almost six months before the event date, getting students engaged in both planning and selling tickets. We also secured a much stronger roster of performers to headline the show. In the end, we ended up selling over three hundred tickets and raised a bunch of money for LOVE. Over three hundred of my peers respectfully listened to real stories of youth who had experienced violence. We had engaged a room full of young people with a message that was truly important, using hip hop as the hook. It was youth led and youth driven. We were onto something.

“A powerful and personal biography, with a lesson for all of us on each page. Brave, poignant and practical, an inspiring road map for a new generation of leaders. ” — Seth Godin, author of This Is Marketing: You Can’t Be Seen Until You Learn to See

“Michael Prosserman has written, in his authentic voice, a timely book about the importance of determination, creativity, and vulnerability in leadership . . . and in life. A grassroots triumph!” — Sharon Avery, President and CEO of Toronto Foundation

“He endures high levels of anxiety around every corner, the son of a schizophrenic mother and a father suffering from Parkinson’s. To describe him as an average student would be charitable and with three fused vertebrae in his neck, the notion of an athletic career should have been a non-starter. ‘Piecez’ defied the odds and became world renowned in the breakin’ world (break dancing for the rest of us). Perhaps a hero to some. That is not what defines his alter ego Michael Prosserman, who has stepped up and built Unity, a non-profit that uses breakin’ to reach teens in underserved communities, building values, self-esteem, and leadership. His philosophy, embodied in his new marvellous book, can be summarized in one line: "Our work was about contribution not attribution. " His humility and honesty make Building Unity a worthy read. A great reminder for all of us. ” — Norman Bacal, best-selling author of O’Dell’s Fall and Breakdown

“The world we live in is transforming before our eyes in extraordinary ways. To help our divided communities begin to heal, we need people like Mike Prosserman. Mike’s vulnerability and passion for his work comes through in every word. As you read his unique story, you’ll witness the kind of perseverance we all wish for when tackling our own challenges — and you’ll be surprised at how much you learn about hip hop culture along the way. Read this book and get inspired to make a difference in your world. ” — Ken Blanchard, co-author of The New One Minute Manager® and Servant Leadership in Action

“Mike Prosserman lived by the motto think big, start small, and scale up to establish Unity Charity. It is extraordinary that he began this life trajectory at 15. I’m sending you a Unity hug. Remember: I was the Grandma. ” — Sharon Johnston, wife of former Governor General David Johnston, a. k.a. Unity Grandma