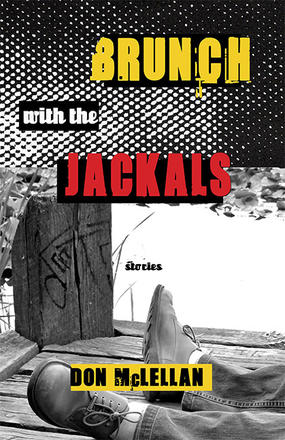 Brunch with the Jackals

Brunch with the Jackals

A man seeking the high life realizes too late that he has destroyed his possibilities for happiness. Four junkies wait anxiously for a drug dealer who seems to have forgotten their existence. A gang leader attempts to navigate racism, greed, and mutiny within the ranks. An aspiring ... Read more

A man seeking the high life realizes too late that he has destroyed his possibilities for happiness. Four junkies wait anxiously for a drug dealer who seems to have forgotten their existence. A gang leader attempts to navigate racism, greed, and mutiny within the ranks. An aspiring writer assesses and obsesses over a crime close to home as the neighbor girl's boyfriend is on trial for her murder. In Brunch with the Jackals, Don McLellan explores the dark side of urban life through stories that combine black comedy, observational invective, and heart-wrenching irony in a collection of neo-noir fiction whose protagonists range from a young boy playing war games with toy soldiers to a junkie who can't control his aggressive impulses.

Don McLellan has worked as a journalist in Canada, South Korea and Hong Kong, and his journalism has been featured in countless publications including Vancouver, Equity, V, and Toronto Life. His short fiction has been published in Descant, Joyland, and The Dalhousie Review, and his debut story collection, In the Quiet After Slaughter (Libros Libertad), was a 2009 ReLit Award finalist. McLellan currently edits a trade magazine in Vancouver.

You can ingest it, snort it, spike it, or shove it up your ass. Whatever your preference. Rapture swoops into the bloodstream like a hurricane making landfall. The rush starts with a tingling along the soles of the feet before it climbs up the shinbones, sweeps over the kneecaps, explores like lustful fingers the inside of the thighs. Then it creeps up the torso and branches off to the arms, the fingertips, to the raw lining of the throat. When it reaches the scalp, there being no place else to go, R delivers a wallop to the cerebral cortex that can trigger a convulsion. Good shit can make a grown man whimper.

Sweet's parents once persuaded her to check into rehab, some five-star facility. She said it was like walking through the pages of People magazine, all the surgically altered faces. When she's sprung, the first call she makes is to Lonnie. You holding, babe?

When he got busted the first time, intent to traffic, the judge sentenced Lonnie to three months. His first day inside a con says to him, Whattya need, fish? Ain't nothin' we don't get, and he wasn't lyin'. The second time he got busted, a possession rap, the magistrate sent Lonnie to a rehab facility for 28 days. A few weeks into the program Lonnie says to his caseworker, No more, I swear, man, and the next thing he knows they've reduced his sentence by 10 days, good behaviour. Tell the do-gooders you're going to finish high school, that you've got a job lined up, they swoon. It don't matter that it's all bullshit.

The thing about rehab is that those running the place don't know Rapture. They might know the other stuff out there - ac/dc, bang, blue devils - and some might even be ex-users, but of R, most know only what they were told at a seminar or what they've read. Drug counsellors are like Sunday school teachers: they go by the book, no questions asked. If you don't change your ways, they say, you'll die. Do you want to die? They just don't get it. The people they're talking to, people like Lonnie James, already have.

Reviews of In the Quiet After Slaughter:

"In the Quiet After Slaughter is full of unforeseen and amusing moments served up well in strong narratives. . . It all makes for an informative blend of history and fiction, rolled together by McLellan's efficient storytelling." - Matthew Firth, author of Suburban Pornography (in the Danforth Review)

"Don McLellan is the kind of wise, well-travelled writer we don't see much of these days. . . he earns the right to be included in the exotic tradition of Hemingway, Maugham and Graham Greene. Like all memorable writing, his stories take us to another world and hold us there. Spare and subtle, they will linger in your mind long after the last page." - John Lekich, Governor General's Award Finalist for The Losers' Club

"The melody in the prose, mesmerizing characters. . . A terrific achievement. . . I consider In the Quiet After Slaughter one of the pleasures of my reading life." - Mike McRanor (in the Vancouver Sun)

"I just finished reading what is probably one of the best books I have ever read. . . [Some of the stories] reminded me of American Graffiti, others reminded me of A Christmas Story. "Ed's Garage" had me laughing long after I had finished reading it; the same could be said about "Fugitive". Excellent writing from an independent, unknown author who shouldn't be. five stars!" - Brian Bianco, author of Dressed for a Kill