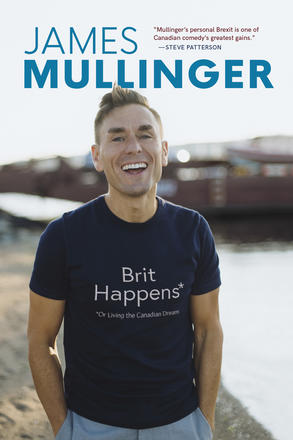 One Sunday afternoon in a tiny postage-stamp garden, James Mullinger made the life-altering decision to give it all up: the London pubs, bustling city streets, and a flourishing comedy career. But where in the world would he and his partner raise a family? The English countryside? ... Read more

One Sunday afternoon in a tiny postage-stamp garden, James Mullinger made the life-altering decision to give it all up: the London pubs, bustling city streets, and a flourishing comedy career. But where in the world would he and his partner raise a family? The English countryside? Toronto? New York?

Brit Happens chronicles Mullinger’s lifetime of adventures, from his beginnings as a shy and nervous kid collecting comedy records at the neighborhood video store, to rising through the ranks of GQ magazine and meeting his personal idols Jerry Seinfeld and Paul McCartney, to imagining the possibility of another life in Canada. From the highs and lows of London to beginning anew in New Brunswick, Brit Happens tells gut-busting stories of success and failure and the unpredictable grind of stand-up comedy. It also offers a laugh-out-loud look at life in Atlantic Canada from the region’s funniest outsider-turned-local.

James Mullinger is an award-winning British comedian and the co-founder of [Edit] Magazine. He spent fifteen years at GQ before moving to Canada. He has appeared on CBC’s The Debaters, at theatres throughout Canada, and in stand-up specials and movies. And yes, he lives in Saint John — or at least nearby.

“I would love to hate James Mullinger. He’s hilarious, insightful, giving — and seems to have an absolutely endless amount of energy for creative output. And he makes it all look so darn easy! But the truth of it is, I can’t. Am I surprised James wrote a book? Of course not. Am I surprised it’s filled with hilarious and touching stories from his unique and intelligent perspective? Not at all. Does it piss me off that he makes it all look so easy? You bet it does!”

“In Brit Happens, Mullinger masterfully straddles the line between objective and inclusive, culturally and geographically. He gently pokes us with a stick while being one of us. I can’t wait for the Brit to hit the fans!”

“Brit Happens is not just a comedian’s memoir, but also doubles as a handbook to how a comedian can survive in such a difficult — yet sometimes lucrative — way of making a living. So let James Mullinger be your guide to how you can do what you enjoy and conquer the impossible . .. yet be ready to pay those dues on that journey. ”

“James Mullinger is my favourite comedian friend who has relocated from England to New Brunswick. And I’m not just saying that because he is the only one. Brit Happens is a great glimpse inside the mind of a British man who becomes more Canadian seemingly by the minute and who might just appreciate the magic of the Canadian Maritimes even more than born and bred Atlantic Canadians. Which I realize might be fighting words to Atlantic Canadians. So fight him if you want to, I guess. But you’ll be fighting one of your own. ”

“I don’t even like British people, but I love James Mullinger and Brit Happens. ”

“The East Coast won the comedy jackpot when James Mullinger decided to make the Maritimes his home. On top of being a brilliant storyteller, James makes me laugh until my stomach hurts. ”

“We should all be curious about the origins, motivations, and unrelenting optimism of James Mullinger. While his contagious good mood still remains a bit of a mystery, all else is laid out here in fine, hilarious form. Brit Happens is a wonderful read. ”