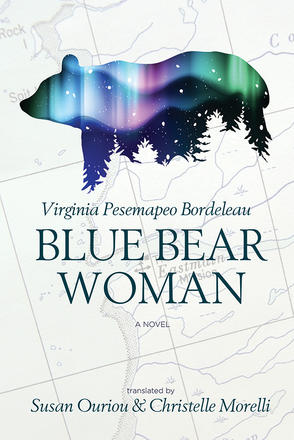 Blue Bear Woman is the first novel written by an Indigenous woman that was published in Quebec in the French language. The story of a young Cree woman's search for her roots and identity, Virginia Pesemapeo Bordeleau's debut novel, Ourse bleue, was originally published in 2007, ... Read more

Blue Bear Woman is the first novel written by an Indigenous woman that was published in Quebec in the French language. The story of a young Cree woman's search for her roots and identity, Virginia Pesemapeo Bordeleau's debut novel, Ourse bleue, was originally published in 2007, and is her second novel to be translated into English. The novel explores contemporary Indigenous life and the impact on the Cree of the building of the Eastmain dam in northern Quebec, posited as "virgin" territory, yet which has actually been part of the Cree traditional territory since time immemorial. In search of her roots, Victoria takes a trip to the country of her Cree ancestors with her companion, Daniel. It is a long journey to the north along the shores of James Bay. Colours, smells, and majestic landscapes arouse memories that soon devolve into strange and hauntings dreams at night. In bits and pieces, uncles, aunties, and cousins arrive to tell the story of Victoria's family and bring with them images of her childhood that are tinged both with joy and sadness. Guided by her totem, the Blue Bear, she returns home to make peace with her soul, as well as release the soul of her Great-Uncle George, a hunter who has been missing in the forest for over twenty years.

Virginia Pesemapeo Bordeleau is an internally-recognized visual artist and published author of Cree origin. She has published three novels and two poetry collections in French. Born in Rapides-des-Cèdres in 1951, of a Cree mother and a mixed-race Quebecois father, she holds a Fine Arts Baccalaureate and has participated in numerous exhibitions in Quebec, United States, Mexico, Denmark, and received several awards for her art. In 2007, she published her first novel, Ourse Blue. Her collection of poetry, De rouge et de blanc (2012) was awarded the Abitibi-Témiscamingue literary prize. Her subsequent novels include L'amant du lac (2013) et (2014). She lives in Abitibi, in northwest Quebec.

Susan Ouriou is an award-winning literary translator (French and Spanish to English), fiction writer and conference interpreter. Among her co-translations is Virginia Pesemapeo Bordeleau's first novel published in translation, Winter Child, and Emmanuelle Walter's non-fiction book Stolen Sisters: The Story of Two Missing Girls, Their Families and How Canada Has Failed Indigenous Women, which was shortlisted for the Governor General's award for translation. An earlier translation, Pieces of Me, won that same award. She is the editor of Languages of Our Land: Indigenous Poems and Stories from Quebec and the anthology Beyond Words: Translating the World. For many years, she translated and interpreted for the Banff Centre's Indigenous Writing residency. She has also interpreted for the Truth and Reconciliation Commission and the National Inquiry into Missing and Murdered Indigenous Women and Girls.

Christelle Morelli is a literary translator and teacher in Calgary's Francophone school system. She has translated works of poetry and fiction, including Virginia Pesemapeo Bordeleau's Winter Child and was short-listed for the Governor General's translation award for Stolen Sisters. Born in France, she has lived in Quebec and Western Canada.

"Virginia Pesemapeo Bordeleau creates a world where tragedy and triumph travel side by side. Alternating between the realities of darkness and light, between past and present, the author's main character ultimately celebrates strength in spirit. The reverence shown towards the Cree history, culture and people of Northern Quebec takes the reader on a journey, filled with stories that no longer wish to be hidden. No longer left untold. Bravo to Virginia and bravo to Inanna Publications for the translation. "
--Carol Rose GoldenEagle (Daniels), author of Bearskin Diary, Hiraeth and Bone Black

"A dizzying dive into a heartrending past. This is what Ourse bleue has to offer in its story of origins and mixed blood. No self-pity to be found in this novel. No hate-filled rage either. Only genuine concern and care that we too share. Coupled with powerful images that continue to haunt us even after we've turned the last page. "
--Le Devoir

Other titles by Christelle Morelli