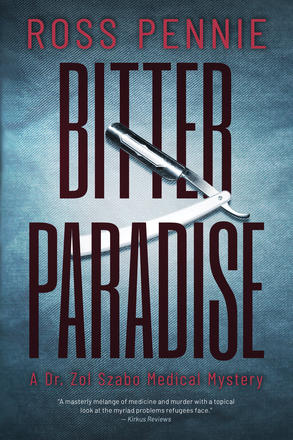 Fans of Bones and Coroner will love Dr. Zol Szabo, a doctor who is out to solve medical mysteries before it’s too late

After weeks of torture at the hands of Syria’s secret police, the bombing of his villa in the ancient city of Aleppo, and the murder of his daughter, trauma ... Read more

Fans of Bones and Coroner will love Dr. Zol Szabo, a doctor who is out to solve medical mysteries before it’s too late

After weeks of torture at the hands of Syria’s secret police, the bombing of his villa in the ancient city of Aleppo, and the murder of his daughter, trauma surgeon Dr. Hosam Khousa flees his fractured homeland with his wife and son. They make their way to Canada as refugees, where Hosam is forced to trade his prestigious scalpel for a barber’s humble clippers. Though he aches to regain his once- prominent surgical career, cutting hair in Hamilton, Ontario, seems a safe way to make a living, until a fellow Syrian is slashed to death in the barbershop. The ensuing gangland vendetta entangles Hosam and threatens his family.

At the same time, epidemic investigators Dr. Zol Szabo and Natasha Sharma are battling an outbreak of vaccine-resistant polio that has struck the city with terrifying fury. When Hosam visits a friend clinging to life in the intensive care unit, he spots something that might help the investigation but will ruin his chance of retaking his place in the operating theater. The Great White North is not the sanctuary he expected, but it’s a bitter paradise he must learn to navigate.

Ross Pennie has been a jungle surgeon, pediatrician, infectious- diseases specialist, professor, and novelist. He lives with his family in Southern Ontario.

Max watched Hosam end the call and scowl into some dark, forbidding place. It was like he was staring into a black hole – Monocerotis or maybe CygnusX-1 – in a far-away section of the Universe. Behind him, the dusky red spatters on the front door looked almost dry, but the splotches on the picture window still glistened.

“What did he say?” Max called from his chair at the back of the shop. “Is he…” His voice cracked on him like a frog’s stupid croak. Being fourteen, that happened a lot. “Is he coming?”

Hosam seemed incapable of hearing, his mind somewhere in the next galaxy. But his thumb was in this one, and it was stroking his thick black moustache. His comb and scissors were here too, poking from the pocket of his blood-soaked apron.

The front-desk phone was still tight in his fist, and there was no missing Marwan's blood clotted on the keypad. A moment later, Hosam jerked his head like he was tumbling out of a bad dream three thousand lightyears away. Steadying himself against the desk, he put down the phone and rubbed the back of his neck, staining it with more of Marwan’s blood. Hosam’s deep-set eyes, usually a light greyish-blue, were as dark as the muzzles on a pair of Stormtrooper E-11 Blasters set to fire.

Finally, he blinked. “Yes, Max. Your father, he says he is coming. ”

Inshallah, that was for sure. Even though Max and his dad never went to church, he hoped God or Allah was pulling hard on whatever strings it took to get Dad there fast.

Max pressed the facecloth against his forehead. Hosam had given it to him a few minutes earlier after he’d examined the gash and said Max was going to need stitches. For now, Hosam said, Max should keep pressure on the wound. Hosam also said he’d have to cut Max’s hair another day. Travis’s turn in Hosam’s chair had finished seconds before the incident, so his low fade was already done. The two boys were now sitting side by side in the chairs where clients normally waited for their barber to call them. Today had turned out to be anything but normal.

“A masterly mélange of medicine and murder with a topical look at the myriad problems refugees face. ” — Kirkus Reviews

“Pennie, himself an expert on infectious diseases, injects the narrative with authenticity and a sense of urgency. ” — Publishers Weekly

“The writing is masterful . . . not only for the prose and the impressive plotting, but also for the crackerjack finale. ” — Booklist

“With its textured plotting, and characters we come to empathize with, Bitter Paradise provides insight into the meticulous and often frustrating work necessary to solve a medical mystery. Given the times in which we are living, its sense of urgency is amplified and its crime solvers’ dedication and efforts are to be applauded. ” — Mystery Scene Magazine

Other titles by Ross Pennie