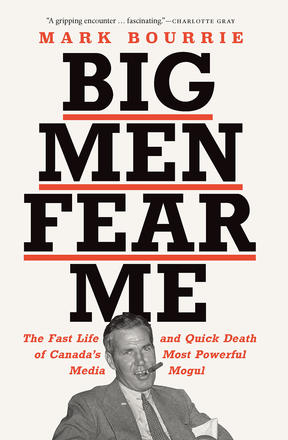 When George McCullagh bought The Globe and The Mail and Empire and merged them into the Globe and Mail, the charismatic 31-year-old high school dropout had already made millions ... Read more

When George McCullagh bought The Globe and The Mail and Empire and merged them into the Globe and Mail, the charismatic 31-year-old high school dropout had already made millions on the stock market. It was just the beginning of the meteoric rise of a man widely expected to one day be prime minister of Canada. But the charismatic McCullagh had a dark side. Dogged by the bipolar disorder that destroyed his political ambitions and eventually killed him, he was all but written out of history. It was a loss so significant that journalist Robert Fulford has called McCullagh’s biography "one of the great unwritten books in Canadian history"—until now.

In Big Men Fear Me, award-winning historian Mark Bourrie tells the remarkable story of McCullagh’s inspirational rise and devastating fall, and with it sheds new light on the resurgence of populist politics, challenges to collective action, and attacks on the free press that characterize our own tumultuous era.

Mark Bourrie is an Ottawa-based author, lawyer, and former journalist. He holds a master’s in Journalism from Carleton University and a PhD in History from the University of Ottawa. In 2017, he was awarded a Juris Doctor degree and was called to the Bar in 2018. He has won numerous awards for his journalism, including a National Magazine Award, and received the RBC Charles Taylor Prize in 2020 for his book Bush Runner: The Adventures of Pierre Radisson.

This is a book about a man who many people, including those at the centre of economic and political power, expected to be Prime Minister of Canada. Instead, he died mysteriously when he was just 47 years old. You’ve probably never heard of George McCullagh because he’s been deliberately erased from Canada’s history. Toronto columnist Robert Fulford called his biography “one of the great unwritten books in Canadian history. ” Well, here’s his biography. It will be up to you to decide whether it’s great.

So, who was George McCullagh and why should you care about him?

George McCullagh was a media rock star. He was the most powerful and dynamic man in Canadian publishing. He was also a giant in the nation’s sports world – he was co-owner of the Toronto Maples and Toronto Argonauts, and had one of the best horse-race stables in Canada. McCullagh moved easily among the elites of the western world and, though seen as a flawed man by those at the very top of Anglosphere governments, was feared and respected. A poor boy from London, Ontario, who dropped out of school in Grade Nine, McCullagh founded The Globe and Mail in the depth of the Great Depression, when he was just 31 years old. The Globe and The Mail and Empire had been around for decades before McCullagh came on the scene, but they were moribund newspapers that were dying of bad management. He hammered them together to make them the country’s most powerful political newspaper. And he deliberately gave the paper its strange name because its initials are GM, the same as his own.

McCullagh worked his way up from nothing by hiking the backroads of rural Ontario selling newspapers during the terrible recession that followed the end of the First World War and the Spanish Flu Pandemic. While he rose from those dusty roads to a reporting job in the newsroom of The Globe, he dragged his own ball and chain. As a kid, he was an alcoholic. Booze masked the fact that he was also bipolar, and that turned out to be the thing that stopped him from becoming a national politician. In the end, mental illness probably killed him.

McCullagh, with the help of Canada’s richest man – a most bizarre multi-millionaire – William Wright, became a force in national politics. He advocated for one-party government in Ottawa and at Queen’s Park. And, for a while, he tried to convince Ontario’s leaders to ditch democracy because partisanship got in the way of decision-makers when Canada was struggling through an economic crisis. He used his media platform – his newspaper and airtime that he bought on radio stations across Canada – to start a national right-of-centre anti-democratic populist movement that culminated just before the Second World War. And when that war came, he fought news censorship, drove wedges that helped divide Canada when the country needed unity to fight Hitler, and helped make his best friend the premier of Ontario. When the war ended, he toured Europe and fired up hatred of the Soviets. Then he bought the Toronto Telegram and was the leader in Canada’s greatest newspaper war.

McCullagh had a giant personality. Handsome, smart, funny, emotional, generous and graced with tremendous social skills, he made friends among the elites of Canada, the United States and Great Britain. He built an estate on the north end of Toronto that was home to some of Canada’s best racehorses and show horses. But when things were going well, he would be struck down by depression and would sneak off to New York to see his psychiatrist. John Foster Kennedy, a man who believed mental illness was a mechanical and chemical problem, not something caused by spiritual or emotional distress. In those days, there was no mercy in Canadian society for anyone who needed psychiatric help, and McCullagh struggled alone, and in secret.

At the age of 47, George McCullagh should have been making a move into national politics. The way was open for him to be leader of the federal Conservative party when his friend George Drew was finished taking his turn. Instead, McCullagh died, almost certainly by suicide, after years of silent suffering and brutal psychiatric treatments. The stigma of his death is one of the reasons you’ve probably never heard of him. Soon after the massive crowds dispersed from his wake and his funeral, George McCullagh’s name was removed from the masthead of the newspapers he owned. His picture came down from the wall of The Globe and Mail’s boardroom. Some years later, his widow, angry and bitter, burned all of his papers, leaving scorched earth for any biographer who tried to tell McCullagh’s story.

Praise for Big Men Fear Me

"Mark Bourrie’s remarkable—and long overdue—biography of one of the most consequential and least remembered Canadians of the past century . .. Bourrie toiled for years to resurrect [George McCullagh], but, I’m glad to say, he did not wipe away the carbuncles, boils, and blisters. His portrait of a man who once was among Canada’s most powerful figures is, to choose two apt terms, both melancholy and masterly. "—Literary Review of Canada

"If you love Mad Men and Netflix biopics about ruthless tie-wearing maniacs, if you're wanting the fourth wall to come crashing down on a discussion about class and poverty . .. you'll probably need to pick up [Big Men Fear Me]. "—Miramichi Reader

"Mark Bourrie revives the life of George McCullagh—a charismatic high-school dropout, a self-made millionaire, the creator and owner of the Globe and Mail, and a man with great political potential—whose fall in the mid-20th century would be as steep as his rise to prominence. "—Quill & Quire

"Nineteen years in the making, Big Men Fear Me shows us what we come from: a Canada run by drunks, mystics, dreamers, gold miners and gold diggers, the horse crazy and the power mad. It’s a great story, well told. "—Elaine Dewar, author of The Handover: How Bigwigs and Bureaucrats Transferred Canada's Best Publisher and the Best Part of Our Literary Heritage to a Foreign Multinational

"What a character! Bourrie’s deeply-researched biography of George McCullagh is both a gripping encounter with a powerful yet unstable press baron and also a fascinating account of early twentieth century Ontario. Written with wit and passion, Big Men Fear Me brings back to life a man who tried to upend Canadian democracy, yet has been almost erased from our history. "—Charlotte Gray, author of Murdered Midas: A Millionaire, His Gold Mine, and a Strange Death on an Island Paradise

“A dark adventure story that sweeps the reader through a world filled with surprises. The book is compelling, authoritative, not a little disturbing—and a significant contribution to the history of 17th-century North America. ”
—Ken McGoogan, Globe and Mail

“A remarkable biography of an even more remarkable 17th-century individual … Beautifully written and endlessly thought-provoking. ”
—Maclean’s

“Bourrie’s writing is grounded in a strong sense of place, partly because of his own extensive knowledge of the land and partly because of Radisson’s descriptive storytelling abilities … a valuable and rare glimpse into 17th-century North America. ”
—Canadian Geographic

Other titles by Mark Bourrie