Before I Was a Critic I Was a Human Being

Before I Was a Critic I Was a Human Being

In that moment, I felt closer to whiteness than not. I was completely complicit and didn?t think twice about entering a space that could cover their walls with images of contemporary Indigenous perspectives, but exclude their physical bodies from entering and experiencing. In ... Read more

Before I Was a Critic I Was a Human Being is the debut collection of nonfiction essays by Amy Fung. In it, Fung takes a closer examination at Canada's mythologies of multiculturalism, settler colonialism, and identity through the lens of a national art critic.

Following the tangents of a foreign-born perspective and the complexities and complicities in participating in ongoing acts of colonial violence, the book as a whole takes the form of a very long land acknowledgement. Taken individually, each essay roots itself in the learning and unlearning process of a first generation settler immigrant as she unfurls each region's sense of place and identity

Praise for Before I Was a Critic I Was a Human Being:

?The hours I've spent with this knowing and moving book about place and placelessness are among the most valuable of my reading life. Wow, thank you, Amy." —Eileen Myles

"As an Indigenous/Haudenosaunee writer and reader, I recognize that Amy Fung's book does not try to convince us that she is a native rights ally but shows us with language how to mould the term ally into a verb." —Janet Rogers, author of Totem Poles and Railroads

"In this compelling work, Amy Fung breathes life and relevance into criticality. This visitor's guide is integral reading." —Cecily Nicholson, author of Wayside Sang, winner of the Governor General's Literary Award for Poetry.

Nathanaël is the author of more than a score of books written in English or in French, including Je Nathanaël (2018); Pasolini's Our (2018); Feder (2016); Sotto l'immagine (2014) and Sisyphus, Outdone: Theatres of the Catastrophal (2012). The French-language notebooks, Carnet de désaccords (2009), Carnet de délibérations (2011), and Carnet de somme (2012) were recast in English in a single volume as The Middle Notebookes (2015), which received the inaugural Publishing Triangle Award for Trans and Gender-Variant Literature.The essay of correspondence, Absence Where As (Claude Cahun and the Unopened Book) (2009) was first published in French as L'absence au lieu (2007). Nathanaël's work has been translated into Basque, Greek, Slovene, and Spanish (Mexico), with book-length publications in Bulgarian and Portuguese (Brazil). The recipient of the Prix Alain-Grandbois for ...s'arrête? Je (2008), Nathanaël's translations include works by Édouard Glissant, Catherine Mavrikakis, and Hilda Hilst (the latter in collaboration with Rachel Gontijo Araújo). Nathanaël's translation of Murder by Danielle Collobert was a finalist for a Best Translated Book Award in 2014. Her translation of The Mausoleum of Lovers by Hervé Guibert has been recognized by fellowships from the PEN American Center and the Centre National du Livre de France. Nathanaël lives in Chicago. 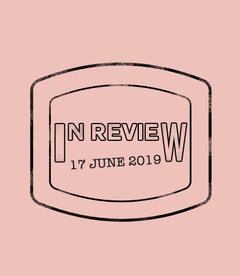 In Review: The Week of June 17th