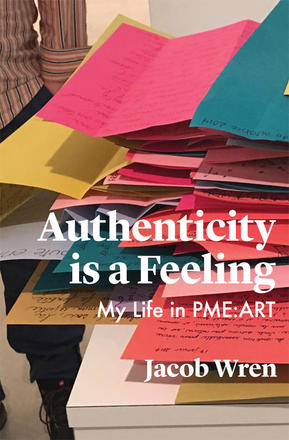 Authenticity is a Feeling

Authenticity is a Feeling

Authenticity is a Feeling: My Life in PME-ART is a compelling hybrid of history, memoir, and performance theory. It tells the story of the interdisciplinary performance group PME-ART and their ongoing endeavour to make a new kind of highly collaborative theatre dedicated to the ... Read more

Authenticity is a Feeling: My Life in PME-ART is a compelling hybrid of history, memoir, and performance theory. It tells the story of the interdisciplinary performance group PME-ART and their ongoing endeavour to make a new kind of highly collaborative theatre dedicated to the fragile but essential act of "being yourself in a performance situation. "

Written, among other things, to celebrate PME-ART's twentieth anniversary, the book begins when Jacob Wren meets Sylvie Lachance and Richard Ducharme, moves from Toronto to Montreal to make just one project, but instead ends up spending the next twenty years creating an eccentric, often bilingual, art. It is a book about being unable to learn French yet nonetheless remaining co-artistic director of a French-speaking performance group, about the Spinal Tap-like adventures of being continuously on tour, about the rewards and difficulties of intensive collaborations, about making performances that break the mold and confronting the repercussions of doing so. A book that aims to change the rules for how interdisciplinary performance can be written about today.

Jacob Wren is a writer, filmmaker and theatre director. He co?founded Candid Stammer Theatre in Toronto in 1988, and in 2002 moved to Montreal to become co?artistic director of the theatre company PME. His work attempts to find ways of speaking casually to the audience ? through both words and movement ? ways that are ironic and sincere. Theatre productions include: How An Intellectual Can Aspire To Savagery!; But Love Is Too Simple To Save Us; I Cut, You Bleed; En francais comme en anglais, it's easy to criticize; Recent Experiences and Revolutions in Therapy (both co?written and co?directed with Nadia Ross) and Unrehearsed Beauty / Le Genie des Autres. Interdisciplinary performances include: Every Song I Have Ever Written, Five Important Books (Mercer Union, Dare Dare & Kyhber Centre for the Arts) and Spontaneous Collaborations. Published books include: My Tongue, My Teeth, Your Voice; 62 Rock Videos For Songs That Will Never Exist (both Exile Editions) and Unrehearsed Beauty (Coach House Books). His theatre work has been performed in Norway, the Czech Republic, Germany, Portugal, France, England, Wales, Scotland, Croatia, Sweden, Austria, Australia, Belgium, Hong Kong, Japan, Ireland, and the Netherlands as well as in New York, Toronto, Calgary, Quebec City, Halifax and Montreal.