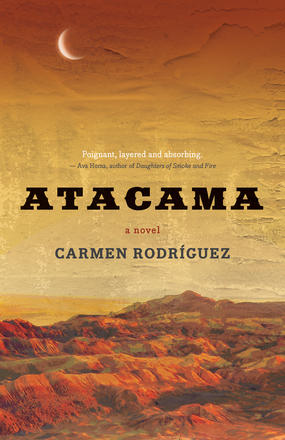 Firmly rooted in historical events, Atacama tells the story of Manuel Garay, the son of a communist miner/union leader and an anarchist organizer of working-class women, and Lucía Céspedes, the daughter of a fascist army officer and a socialite. A fateful turn of events leads ... Read more

Firmly rooted in historical events, Atacama tells the story of Manuel Garay, the son of a communist miner/union leader and an anarchist organizer of working-class women, and Lucía Céspedes, the daughter of a fascist army officer and a socialite. A fateful turn of events leads to twelve-year-old Lucía befriending twelve-year-old Manuel, inextricably connecting them to a common denominator: Lucía’s adoring father and the perpetrator of the heinous crimes that have caused both children immeasurable suffering. Manuel and Lucía forge a friendship that grows as they come of age and realize that their lives are not only linked by Ernesto Céspedes’ actions, but also by a deep understanding of the other’s emotional predicaments, their commitment to social justice and their belief in the power of writing and art. Set in the first half of the twentieth century, but resonating loudly with today’s changing times, beautifully crafted Atacama covers themes related to class, gender, trauma, survival and the role of art in society.

Chilean-Canadian bilingual writer Carmen Rodríguez (carmenrodriguez.ca) is the author of Guerra Prolongada/Protracted War (poetry); a body to remember with/De cuerpo entero (short stories); and Retribution (a novel). Rodríguez also has an extensive career as an educator and journalist, including work in adult literacy and popular education, particularly with Indigenous Peoples and other marginalized communities in the Americas.

“Carmen Rodríguez’s illuminating historical novel is an homage to human resilience and to everyday people’s ability to stand up to terror and oppression. Poignant, layered, and absorbing, Atacama demonstrates that biology doesn’t have to shape destiny and that it is possible to choose individual values over the complex bonds of family. ”

— Ava Homa, author of Echoes from the Other Land and Daughters of Smoke and Fire.

“Atacama presents two of the 20th century’s great struggles for democratic freedom, in Chile and in Spain. From childhood on, Lucía and Manuel embody human efforts everywhere to make the world better and to make art. In telling their life stories, Carmen Rodríguez has written a real page-turner — complete with an unexpected ending. ”

— Cynthia Flood, fiction writer and award-winning author of My Father Took a Cake to France and Red Girl Rat Boy, among others.

“From the mining camps of northern Chile to a dance studio in Valparaíso, and on to Barcelona during the Spanish Civil War and Pablo Neruda’s office in a Parisian consulate… Carmen Rodríguez’s new novel, Atacama, is wide-ranging and ambitious. At its centre are the intertwined stories of an unlikely pairing: Manuel Garay, son of a poor family of activists and union organizers; and Lucía Céspedes, daughter of the military officer responsible for Manuel’s father’s death (and many others). The novel’s narrative switches deftly between these two characters’ stories, as it takes us from the 1920s to the 1940s, a period of heroic struggle but also brutal repression in Latin America and around the world. Just when all seems lost, a glimmer of hope takes us to a surprising twist set in the present day. Rodríguez’s narrative is ultimately a story about the power of writing, the power of art, both to dramatize grief and to encourage remembrance. As drama and as remembrance, this novel succeeds admirably. ”

“This is an extraordinary book. While it spans over seventy years of a personal drama, it also portrays—both accurately and poignantly — Chile’s reality in the first half of the twentieth century, as well as that of the Spanish Civil War. But Atacama is much more than a sweeping historical novel, as it also delves deep into the psyches of its protagonists — Lucía and Manuel, who, as children, face up to horrendous personal tragedies and yet overcome them through their love of art and the written word, and their commitment to social justice. The crackling dramatic tension, the twists and turns in Lucía and Manuel’s lives, all the way to the conclusion of the story in present time Vancouver, Canada, are masterfully crafted. I cannot speak too highly of this work. ”

— John M. Kirk, professor of Latin American studies and author of eighteen books, including Cuba at the Crossroads and José Martí, Mentor of the Cuban Revolution.

“Atacama brings to life a variety of intensely moving, creative, dedicated characters whose lives intersect and fulfill one another in surprising ways, even under the shadow of unrelenting threat. It takes place over the span of a century, beginning during the mining strikes in the northern Chilean desert in the 1920s and moving through the artistic world of Valparaíso and Santiago and on to events of the Spanish Civil War. It reaches deep into Chilean history to reveal the courage and endurance of its people, whose rights have been repeatedly crushed by the military and the oligarchs that control it, but whose voices have never been silenced and that speak to us here. ”

— Hugh Hazelton, writer and translator, author of Antimatter and winner of the Governor General’s Award for Translation.

“Atacama may be a novel, but it’s written with the authority of memoir, the directness of history, and the magic of poetry. A story of heroism and depravity in politics, and the struggle of two young people caught between the two. ”

— Susan Crean, cultural critic and author of The Laughing One and Finding Mr. Wong.

“In Atacama, Carmen Rodríguez opens a view that will be unfamiliar to most Canadians – that of Chile in the first half of the twentieth century, which makes her book as much a history primer as a novel. Atacama, however, is firmly of this century, as Rodríguez paints a sprawling scene whose twists and turns span decades and, through the Chilean diaspora, find echoes in contemporary Canada. An astute reader might discern the influence of Eduardo Galleano – using story as a tool for intellectual discourse. But Atacama’s greatest strength is in scope and cinematic feel - reading it makes me crave a screen adaptation. ”

“Atacama is historical fiction at its best, taking us into the hearts and minds of those seeking change in tumultuous times. Carmen Rodríguez’s new novel is a deep dive into the life of revolutionary activists, journalists and artists in Chile and Spain during the first half of the 20th Century. From the fight against fascism in Chile to the Spanish Civil War, we experience these historical battles through the intimate lives Lucía González and Manuel Garay, the novel’s two main characters. Set a century ago, the resonance for today’s changing times is stunning. A great read. ”

— Judy Rebick, journalist, activist and author of Ten Thousand Roses: The Making of a Feminist Revolution and Heroes in My Head.