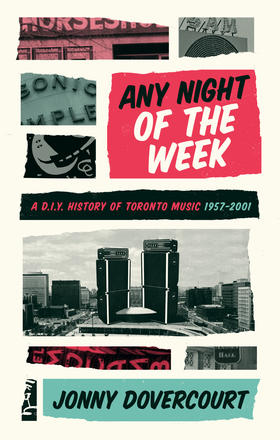 Any Night of the Week

Any Night of the Week

The story of how Toronto became a music mecca.

The story of how Toronto became a music mecca.

“Jonny Dovercourt, a tireless force in Toronto’s music scene, offers the widest-ranging view out there on how an Anglo-Saxon backwater terrified of people going to bars on Sundays transforms itself into a multicultural metropolis that raises up more than its share of beloved artists, from indie to hip-hop to the unclassifiable. His unique approach is to zoom in on the rooms where it’s happened – the live venues that come and too frequently go – as well as on the people who’ve devoted their lives and labours to collective creativity in a city that sometimes seems like it’d rather stick to banking. For locals, fans, and urban arts denizens anywhere, the essential Any Night of the Week is full of inspiration, discoveries, and cautionary tales. ” —Carl Wilson, Slate music critic and author of Let’s Talk About Love: A Journey to the End of Taste, one of Billboard’s ‘100 Greatest Music Books of All Time’

“Toronto has long been one of North America’s great music cities, but hasn’t got the same credit as L. A., Memphis, Nashville, and others. This book will go a long way towards proving Toronto’s place in the music universe. ” —Alan Cross, host, the Ongoing History of New Music

“The sweaty, thunderous exhilaration of being in a packed club, in collective thrall to a killer band, extends across generations, platforms, and genre preferences. With this essential book, Jonny has created something that's not just a time capsule, but a time machine. ” —Sarah Liss, author of Army of Lovers

Jonny Dovercourt was born Jonathan Bunce in Scarborough, Ontario. He is currently co-artistic director of the Music Gallery in Toronto. He co-founded the Wavelength music series and zine, and has written for Eye Weekly and MusicWorks. He has been a member of numerous Toronto independent rock music bands, most recently Republic of Safety.

"Jonny Dovercourt reminds us that the vibrant club scene we take for granted these days has always existed, and that those who once served - not just the groups, but the promoters, deejays, zinesters and even the fans - need to be given their places in Toronto history. " —Michael Panontin, Canuckistan Music

"Dovercourt makes space for all comers — Caribbean and experimental music have long and rich histories in Toronto and clearly illustrates a hip-hop continuum that goes beyond Maestro and Drake. As he notes right off the top, each scene is deserving of its own book. " —Exclaim!

Other titles by Jonny Dovercourt