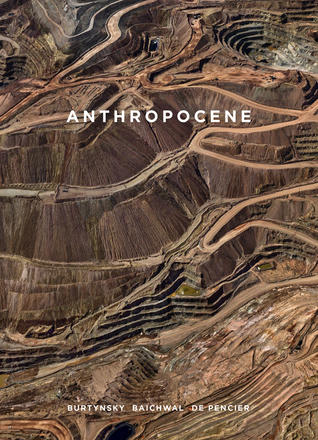 A controversial idea currently under vigorous and passionate international debate that would recognize the "human signature" on the planet.

Anthropocene is the latest book by Edward Burtynsky, Jennifer Baichwal, and Nicholas de Pencier to chronicle the massive and irreversible ... Read more

A controversial idea currently under vigorous and passionate international debate that would recognize the "human signature" on the planet.

Anthropocene is the latest book by Edward Burtynsky, Jennifer Baichwal, and Nicholas de Pencier to chronicle the massive and irreversible impact of humans on the Earth — on a geological scale.

In photographs that are both stunning and disconcerting, Burtynsky, Baichwal, and de Pencier document species extinction (the burning of elephant tusks to disrupt the illegal trade of ivory), technofossils (swathes of discarded plastic forming geological layers), and terraforming (mines and industrial agriculture).

The book also features a range of essays by artists, curators, and scientists, some part of an international group of scientists who have proposed that the Earth is now entering a new era of geological time where human activity is the driving force behind environmental and geological change — i. e. the Anthropocene. Thus the book brings contemporary art into conversation with environmental science and anthropology on a topic that urgently affects all of us.

Anthropocene was published to coincide with a major international exhibition that opened simultaneously in September 2018 at the Art Gallery of Ontario and the National Gallery of Canada and the release of a film on the same topic by Baichwal and de Pencier.

Sophie Hackett is a curator of Photography at the Art Gallery of Ontario.

Andrea Kunard taught for over a decade at Carleton University, Queen's University and Nova Scotia College of Art & Design University. As associate curator at the National Gallery of Canada, Kunard explores the intersections of contemporary and historical issues in Canadian photography, focusing on cultural uses of the medium, and its capacity to challenge and reconfigure accepted understandings of the public and private, subjectivity, memory, and knowledge. She has curated numerous exhibition for the National Gallery and Library and Archives Canada. Kunard is the co-editor of The Cultural Work of Photography in Canada. She has also written articles on contemporary and historical photography in The Journal of Canadian Art History, the International Journal of Canadian Studies, and Early Popular Visual Culture.

Urs Stahel is the director, curator, and editor of Fotomuseum Winterthur.

"The difficulties of the Anthropocene are all around us; Mr. Burtynsky, Ms. Baichwal and Mr. de Pencier will make you stop, look and think. "

"Documenting the effect of industrialization on the environment, Burtynsky provokes his viewers to contemplate the world he shoots. At first one is dazzled by the color and apparent fluidity in the landscapes that he captures, but on deeper examination one begins to realize that these are quarry mines, oil refining factories, and recycling centers. "

Other titles by Andrea Kunard