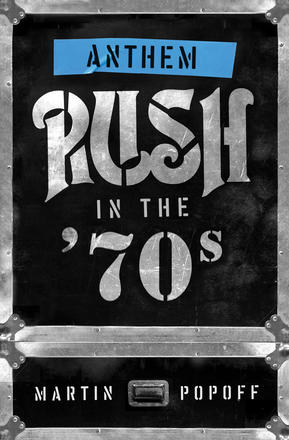 Part one of the definitive biography of Rock ’n’ Roll’s kings of the North … now in paperback!

Includes two full-color photo inserts, with 16 pages of the early days of the band on tour and in the studio.

Part one of the definitive biography of Rock ’n’ Roll’s kings of the North … now in paperback!

Includes two full-color photo inserts, with 16 pages of the early days of the band on tour and in the studio.

With extensive, firsthand reflections from Geddy Lee, Alex Lifeson, and Neil Peart, as well as from family, friends, and fellow musicians, Anthem: Rush in the ’70s is a pointed and detailed portrait of Canada’s greatest rock ambassadors. The first of three volumes, Anthem puts the band’s catalog, from their self-titled debut to 1978’s Hemispheres (the next volume resumes with the release of Permanent Waves) into both Canadian and general pop culture context and presents the trio of quintessentially dependable, courteous Canucks as generators of incendiary, groundbreaking rock ’n’ roll.

Fighting complacency, provoking thought, and often enraging critics, Rush has been at war with the music industry since 1974, when they were first dismissed as the Led Zeppelin of the north. Anthem, like each volume in this series, celebrates the perseverance of Geddy, Alex, and Neil: three men who maintained their values while operating from a Canadian base, throughout lean years, personal tragedies, and the band’s eventual worldwide success.

Like Geezer Butler in Black Sabbath, to reiterate, Geddy indeed began on guitar. Alex, however, missed this part of Lee’s evolution.

“I didn’t know Ged when he played guitar. So the transition was already completed by the time we started jamming together and playing. Because that’s what we did after school. We’d plug into his amp and play. There was one guitar and one bass. So I’m not really sure about that transition. I’m sure he was interested in guitar like everybody was interested in guitar. But once we actually started playing and learning instruments, that was his chosen one. Just think John Rutsey in that early days—the drums became his thing but I don’t know if in his heart he wanted to be a drummer. I think he wanted to be a guitarist as well. But everybody had their job that they sort of gravitated to. ”

Says Geddy, “I was nominated to be the bass player when the first band I was in, the bass player couldn’t be in our band. I think his parent’s prohibited him or something, and we had no bass player so they said, ‘You play bass’ and I said okay, and that was how simple it was. That happens to a lot of bass players. Everyone wants to be a guitar player, but I was happy to be bass player. Bass player is like being a major league catcher. It’s the quickest way to the majors. Nobody wants to be a bass player. It’s a great instrument, it really is, awesome way to spend your time. I had teachers you know; I’m just carrying on the tradition of Jack Bruce, Jack Casady, Chris Squire, a fine tradition of noisy bass players that refuse to stay in the background. So I feel that’s my sacred duty, to carry on what they started. ”

“Popoff provides a comprehensive appreciation of Rush’s music, focusing on its formation in 1968 through the 1970s … This will thrill Rush’s huge fan base. ” — Publishers Weekly

“VERDICT A must for Rush fans and an intriguing examination of how small musical groups coalesce. Also a fitting memorial to drummer Neil Peart, who died this past January. ” — Library Journal

“Popoff (who worked on the Rush documentary, Beyond the Lighted Stage, 2010) charts Rush from their early years playing bars around Ontario up through worldwide success and the creation of their first seven albums. ” — Booklist

“Popoff mainly steps out of the way to allow Rush (as well as their moms) to tell their own story. That storytelling is consistently interesting. ” — Psychobabble

“This 375-page hardcover book paints a fascinating picture of the band's early years, and is easily the most in-depth Rush tome I've read. ” — BraveWords