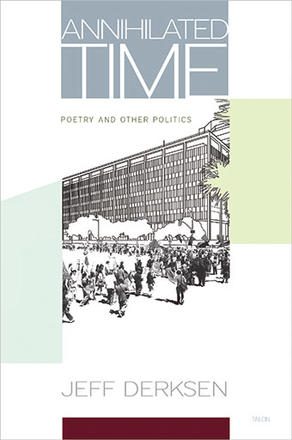 Reading against the grain of global ideological flows, Derksen demonstrates how borders, identities, national literatures, urban territories, built space and the spaces of culture and politics have not simply been eroded by globalization, but how the traditional identity-determined ... Read more

Reading against the grain of global ideological flows, Derksen demonstrates how borders, identities, national literatures, urban territories, built space and the spaces of culture and politics have not simply been eroded by globalization, but how the traditional identity-determined scales of culture are being re-imagined as contested spaces for dynamic communities of discourse.
Apologists for the current global American imperialism ironically characterize it as a civilizing force generously brought to the world by a presumed American exceptionalism to empire. In their view, it is an extension of a neoliberal economic developmentalism, imagined as non-ideological and anti-authoritarian (“democratic”) and as the highest cultural form of capitalism.
Poetry, that under-achieving commodity, that “greeny flower,” has not been exempt from the increased glare of what is now the new state cultural watchdog. An early public controversy—generating vitriolic discourse—was the long poem “Somebody Blew Up America,” by Amiri Baraka, then poet laureate for the state of New Jersey. Jeff Derksen spins this controversial issue (and many others) around the pivot of September 11, 2001. To read these works in the cultural and social context that led to them being criminalized or erased, we can look to how 9/11 provided an historical occasion for a reconfiguration of the role of culture in the nation state.
In this collection of essays, Derksen explores the ways in which seemingly minor forms of culture—poetry, visual art, and critical practices—encounter what he calls “the long present neoliberal moment” of the imperialist agenda of globalization. The title inverts Marx’s famous view (central to critical geography) that “the problem of space” has been overcome: that capitalism annihilates space with time. Today, literary, cultural and geographical readings emphasize our lived experience of space and contest the representations of a globalized environment that capital and its ideological software, neoliberalism, promote.

Jeff Derksen is a founding member of Vancouver’s writer-run centre, the Kootenay School of Writing, and has worked as an editor of Writing magazine. As an editor, Derksen also organized “Disgust and Overdetermination: a poetics issue,” for Open Letter and “Poetry and the Long Neoliberal Moment” for West Coast Line. His poetry and critical writing on art, urbanism, and text have been published in Europe and North America, including in the anthologies East of Main and Verse: Postmodern Poetry and Language Writing. His Down Time won the 1991 Dorothy Livesay Poetry Prize, and a selection from Dwell – “Host Nation, Host Society” – was nominated for inclusion in the anthology The Gertrude Stein Awards in Innovative North American Poetry: 1993. Formerly a research fellow at the Center for Place, Culture, and Politics at the City University of New York, Derksen currently teaches in the Department of English at Simon Fraser University. He also collaborates on visual art and research projects (focusing on urban issues) with the research collective Urban Subjects.

“In Annihilated Time, Jeff Derksen offers a clear point of view from which to critique and unsettle contemporary neoliberalism and its slippery redeployments of democratic ­vocabularies for undemocratic ends. By recognizing the range of scales—local, national, and global—through which ­neoliberalism operates, and the contradictory interactions of the same or related gestures depending on the scale at which one reads, Derksen suggests that it is through a ­multivalenced poetics of space, movement, and reflexivity that readers and ­writers resist and thrive. These are smart, thoughtful essays that offer a wide range of ­opportunities to help the justice-minded to productively refuse or rearticulate rapidly ­shifting forms of power for more open and liberatory movements. ”
—Larissa Lai, author of Saltfish Girl

“In this long-awaited collection of essays, Jeff Derksen explores the new pressures placed on poetry, art, and theory by the intensified intimacy between culture and economics in the ‘long neoliberal moment,’ with great intelligence and ironic humour. Drawing on live debates and controversies—as opposed to isolated theories or static models—in ­disciplines ranging from Marxist geography to postmodern architecture, Derksen raises the question of what it means to make art in the present moment in a new and exciting way. ”
—Sianne Ngai, author of Ugly Feelings

“Just as Charles Olson turned to geographer Carl Sauer to pry open the field of ­contemporary poetry and poetics in the previous century, Jeff Derksen here brilliantly ­relates poetry (‘that underachieving commodity’) to ­architecture, and explores the ­uneven development of contested urban territories in the work of Marxist geographers. Derksen’s incisive critiques of the lengthy spectre of neoliberalism that is haunting our globe seek to create not only new readers of poetry but new forms of and spaces for a re-scaled, re-envisioned, and re-invigorated cultural citizenship. Annihilated Time ­deserves to be read as it was written: boldly and widely. ”
—Mark Nowak, editor of XCP: Cross Cultural Poetics, author of Coal Mountain Elementary