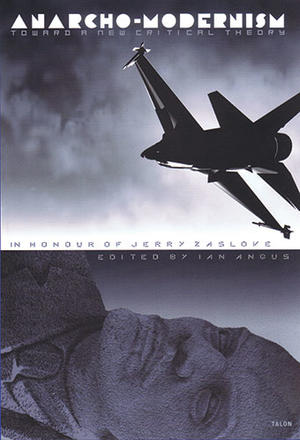 This volume is a collection of 38 pieces unified by a combination of the playful, primitive aesthetic of literary modernism with the anti-authoritarian, anarchist praxis of radical democratic politics. This bipolar sensibility permeates the work of Jerry Zaslove, to whom the ... Read more

This volume is a collection of 38 pieces unified by a combination of the playful, primitive aesthetic of literary modernism with the anti-authoritarian, anarchist praxis of radical democratic politics. This bipolar sensibility permeates the work of Jerry Zaslove, to whom the book is dedicated.

Yet even if this sensibility pervades the book, the ideas presented here are all animated by highly conflicting attempts to articulate rigourously the anarcho-modernist stance, its literary forms and its political implications and values. In particular, all the contributors explore the fundamental tension that defines our new century?between bureaucratization and industrialization on the one hand, and the critical and autonomous individual on the other.

The five sections of the work are The Industrialization of Culture; Literature and Aesthetics; Public Education and Literacy; Human Rights and Politics; and Anarchism and Friendship.

Whatever holds together the anarchist solidarity represented in this collection, it isn’t a ?principle,” a generality that is made to apply equally to all comers. It’s a particular relation, an affinity, that perhaps can be approached through thinking about friendship as a utopia of the near, the particular, and the concrete?not as a system of generalities for all. This guiding orientation is vital for the reconstruction of a critical theory adequate for our own time.

The contributors are all friends, colleagues and collaborators of Jerry Zaslove, many of whom, such as Russell Jacoby, Robin Blaser, Wayne Burns, Harvey Graff, David Kettler, Wolf-Dieter Narr, Jeff Wall and Heribert Adam, are well established and widely recognized in their fields. There are also many newer authors included here whose work is sure to become equally well known over time.

Ian Angus is professor of Humanities at Simon Fraser University. He has written or edited nine books on critical theory and political thought. He lives in East Vancouver with his wife and daughter.

Other titles by Ian Angus