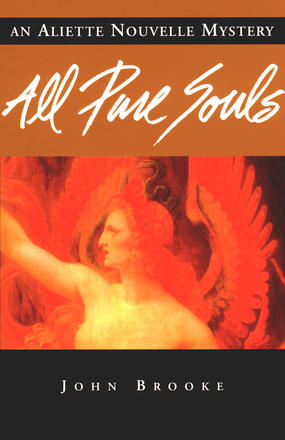 There's a deadly August heatwave and Inspector Aliette Nouvelle is looking forward to her upcoming vacation. She's been working hard, without much reward. Denied promotion to the coveted Commissaire's post -- which seemed practically guaranteed before the dubious Jacques Normand affair -- she now finds herself working under the new acting Commissaire, Claude Neon, her former assistant.

It's hard not to be bitter. When Claude presents Aliette with the report on the murder of a Marilyn Monroe look-alike who had been the star attraction at the upscale brothel known as Mari Morgan's, he assures her it's an open-and-shut case. The prime suspect is already sitting in a cell awaiting questioning and psychiatric evaluation. But Aliette's instincts tell her that this is not quite as simple as it appears. Claude doesn't always agree with Aliette's methods, but he has learned from first-hand experience to trust her instincts: she's still the best cop in la brigade. He reluctantly hands over the case and Aliette embarks on an unsettling journey, the strangely uncooperative putes' clues leading her to a sisterly cult and the ancient goddess who rules it.

Claude shrugs; it's too hot for a big debate. "Who else could it be? Everyone knows the gangs aren't in that place. It's a clear case of mixing too much pleasure with business."

That place is Mari Morgan's. Elegant and expensive, the brothel is tolerated because it would have been a large political mistake for anyone who might have had the power to make a fuss to do so. If you had made it that far in the local hierarchy and had not yet been to Mari Morgan's, the chances were too high you were in tight with someone who had. As for members of the Police Judiciaire such as herself and Claude, they're paid by the Minister of the Interior; as such, they've nothing to gain from the local meisters and too much to lose if they go poking their noses into pleasure pots where there's no real call. But it's true: never a hint of a gang or gang-type activity around Mari Morgan's. That is Aliette's business and she knows. "What about the guests?"

"The guests..." Claude yawns, fighting lethargy as he goes back to his notes; "a dentist, an accountant from Hôtel de Ville, a couple of lawyers you might have run into, two managers from Peugeot with one of their parts suppliers in from Lille, and a Herr Von Schorrker from across the river. Five of them were otherwise engaged at the time she was found, three were sitting in the bar. No one's above suspicion, of course...let's just say the guests all cancel themselves out of the picture. No need to ruin any careers, Inspector. Not with this heat...our public would hold it against us. Mmm?"

"A big bother getting the Germans to comply."

True enough. "How many girls?"

"So, nine girls --five in bed, at least one working the bar; leaves three with time on their hands."

"Two actually -- she was with him, remember."

"Right." With him? Often the mystery starts right there: A woman could be "with" so many different men, each of them in a different way; all the more so if work's involved. Why am I admired? Why am I wanted? Why am I privy? Between the personal and the professional, the reasons are seldom clear. Like most women, she has learned to live with it. But most women do not have their hearts pierced in the boss's office. Studying the information: "Says here she was very much in demand. Which means she was bringing in money. Why would a pimp be angry?"

She watches Claude staring down at the collected information, shaking the head that is too small for the gangly body in that slow, morose way. Is he pondering the fact of the corrupting influences that always swirl around a man's carefully constructed life? He has, after all, been the beneficiary of such influence. The friendship of Louis Moreau, their former boss, with Jacques Normand, one of the country's most wanted criminals, had played itself out to a tragic end, leaving Inspector Claude Néon in charge. Whether justly so is a question not enough people have sought to consider. She knows he knows it; she hopes the lesson has not been lost: forget hard work; forget risk and results; pray for luck... maybe a penis to go with it? Mmm -- bitter, bitter. Stop it, Aliette!

Yes, well, this heat will make you edgy. And he's just being lazy. Just another pute come to a bad finish at the hands of another man who thinks he owns her. Who cares?

She also knows Claude's not trying to steer her away from the murder in the brothel. Since taking over, that's one thing he hasn't tried. She has waited for it, but it's as if Claude hasn't the energy for that kind of confrontation. Inspector Nouvelle lost out on the big promotion but has won, tacitly, the right to pick and choose her cases, a new level of freedom as her consolation prize. While here, three months later, Claude Néon is still testing the waters of power. Tentative. Still very much the "interim" man. No way he'll tell her to leave it be. What he is saying is simply true: the thing might not be her concern at all.

While Nouvelle's co-workers consider it an open and shut case, Brooke's protagonist suspects, correctly, that it is not as straightforward as it seems. Through twists and turns of a contrived plot involving a secret cult, a hallucinogenic potion and a houseful of sad, pathetic, lonely and disturbed women, Nouvelle proceeds with her investigation. The character of Nouvelle is intriguing and refreshingly unconventional. She is an intelligent and independent single woman, open and honest about her weaknesses and her desires. She seems to understand and accept the cost of putting her professional life before her personal life. Brooke is equally adept at depicting the eastern French setting in which the novel takes place. While he resides in Montreal, it is evident that he is intimately familiar with the streets and people of France. His explanations of the workings of the police and legal systems there are particularly engaging and necessary to a clear understanding of the narrative and of the career of Aliette Nouvelle.