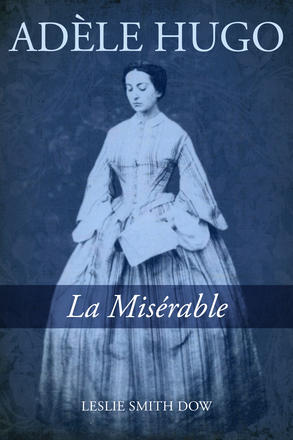 When Victor Hugo died in 1885, the world was shocked to discover that he had a lone survivor: his daughter Adèle, incarcerated in an asylum for insane gentlewomen. Adèle Hugo was an accomplished, intelligent, and ambitious young woman whose potential shrank with every year ... Read more

When Victor Hugo died in 1885, the world was shocked to discover that he had a lone survivor: his daughter Adèle, incarcerated in an asylum for insane gentlewomen. Adèle Hugo was an accomplished, intelligent, and ambitious young woman whose potential shrank with every year she spent under her tyrannical father’s roof. At thirty-three, she fell desperately in love with an English soldier who quickly lost interest in everything about her except her money. Her obsession with him proved her undoing. In Adèle Hugo: La Misérable, Leslie Smith Dow recounts Adèle’s nine-year pursuit of her unwilling lover from Guernsey to Halifax to Barbados, her return to her father’s sphere by a former slave, and the progressive schizophrenia that finally incapacitated her. Smith Dow bases Adèle’s stranger-than-fiction history on her bizarre diaries, her family’s letters, and the testimony of eyewitnesses. In this new ebook-only edition, Leslie Smith Dow updates the saga of Adèle Hugo with the fascinating mystery of a painting attributed to the Impressionist master Édouard Manet. This painting came to light in an online auction around 2004. After the purchaser contacted Smith Dow for her opinion, the author and the painting’s new owner set out to determine whether the subject of the painting was Adèle Hugo, and whether it was indeed painted by Manet. Smith Dow’s new afterword recounts their sleuthing in dramatic style.

LESLIE SMITH DOW is an Ottawa-based author of print and eBooks, including the award-winning historical biographies Adèle Hugo: La Misérable and Anna Leonowens: A Life Beyond the King and I. A veteran journalist and freelance writer, she enjoys travel and reading improbable-but-true stories.

"Leslie Smith Dow has written in a very readable style the story of the fascinating and almost unbelievable life of Adèle Hugo. I highly recommend this book, especially to readers interested in women's issues and in psychology. "

"Adèle Hugo: La Misérable is elegantly written and concise. All good news, it must be said, for history and literature buffs alike. "

"In this immensely readable book, Dow has captured with clarity and assurance the frustrations of being an upper-class woman in 19th-century French society. Fans of mystery, romance, and history will all enjoy a fast-paced and sympathetic portrait of a talented but troubled young woman. "

"Adèle Hugo: La Misérable is riveting. This book has themes and ideas and is written in plain, crisp sentences. Dow brings a much deeper feminist perspective to her rich and rounded telling of Adèle's story. It is a book well worth reading. "

"Award-winning Ottawa author Leslie Smith Dow writes in a lucid and factual style that is as interesting and as readable as a well-written novel. The story she has pieced together from numerous sources is an astounding one. One of the most impressive features of Dow"s writing is the way in which she is able to present not only Adèle but also the events and people in her life in all their complexity. "

"Leslie Smith Dow's Adèle Hugo: La Misérable is the intriguing story of one daughter's bizarre but ultimately hapless rebellion against the restrictions of her lot. La Misérable succeeds very well as the sympathetic portrait of a woman driven to freakish lengths in search of freedom. "