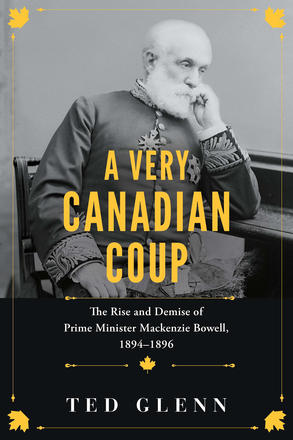 A fresh take on the Manitoba schools question and the Conservative Coup that toppled Canada’s fifth prime minister.
When Mackenzie Bowell became Canada’s fifth prime minister in December 1894, everyone — including Bowell — expected the job would involve nothing more than keeping the wheels on the Conservative wagon until a spring election.
Plans for a quiet caretakership were dashed in January 1895 when the courts ruled that the Manitoba government had violated Roman Catholics’ constitutional rights by abolishing the provincial separate school system. Catholics in Quebec demanded that Bowell force Manitoba to restore the schools, while Ontario Protestants warned him to keep his hands off.
Backed into a corner, Bowell tried three times to negotiate a compromise with the Manitoba government over the course of 1895, but to no avail. By January 1896, seven of Bowell’s cabinet ministers had had enough. Convinced that Bowell had tarnished the Conservative brand, the caballers forced the prime minister to resign and make way for a new leader, who they believed could revive party fortunes in time for the coming election—the old Warhorse of Cumberland, Sir Charles Tupper.
Ultimately, the coup didn’t matter. Tupper and his conspirators pleaded their case in Parliament and on the hustings, but nothing could stand in the way of Wilfrid Laurier and his Liberals’ historic rise to power in the June 1896 election.
A Very Canadian Coup brings fresh sources and new perspectives to bear on the life and times of Canada’s fifth prime minister and his Sixth Ministry.

Ted Glenn is a professor at Humber College and the author of Riding into Battle: Canadian Cyclists in the Great War. He divides his time between Grey County and Toronto.

A Very Canadian Coup is an absorbing story of political intrigue in a turbulent time. Through extensive research, Ted Glenn has created a meticulous account of a remarkable episode in Canada’s past.

— Stephen Azzi, professor of Political Management at Carleton University and author of Historical Dictionary of Canada

Few Canadians know that the key issue in the 1896 federal election was the Manitoba Schools question; fewer know that religion and language once played a very important part in our elections; and fewer still know that Sir Mackenzie Bowell, former Grandmaster of the Orange Lodge of British North America, proposed remedial legislation which would have returned to French Roman Catholics their rights to language and religion.  Bowell’s views were controversial within his caucus and a coup was staged to remove him as Prime Minister.  I well remember the heat the issue generated in the 1960s when my boss, the Honourable Duff Roblin, Premier of Manitoba, tried to restore justice.  Ted Glenn is an excellent author with a sound command of the historical issues and the structure of the English language.

— Joe Martin, author of Relentless Change, A Case Book for the Study of Canadian Business History

Ted Glenn has taken one of the most dramatic yet little-known events in Canadian history and made it come alive. He tells the detailed story with compelling language. His research is impeccable as he navigates the tricky issues of the 1890s. This is precisely how to present historical non-fiction. The characters shine through, one can sense the tone of the era and it reads like a suspense novel from beginning to end.

Other titles by Ted Glenn