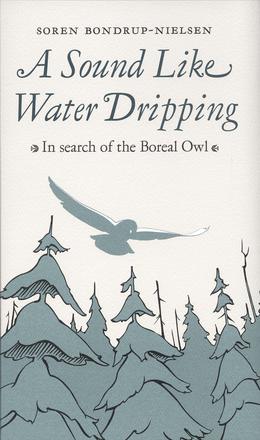 With enthusiasm and sincerity biologist Soren Bondrup-Nielsen recalls his experience as a graduate student in the 1970s researching the Boreal Owl in northern Ontario and Alberta. After receiving his BSc in the spring of 1974, Bondrup-Nielsen travels by train to Kapuskasing ... Read more

With enthusiasm and sincerity biologist Soren Bondrup-Nielsen recalls his experience as a graduate student in the 1970s researching the Boreal Owl in northern Ontario and Alberta. After receiving his BSc in the spring of 1974, Bondrup-Nielsen travels by train to Kapuskasing to begin his study of this tiny, elusive species, cousin to the Tengmalm’s Owl of Scandinavia. Though initially dissuaded by his supervisor, the author sets about recording the owl’s call and locating individual territories. On cross-country skis, pulling a toboggan of supplies, Bondrup-Nielsen begins his first field season with reason for optimism, recording two distinct calls and being struck in the head by a male Boreal within his first week.

After repairing to the nearby logging camp (Camp 86) where the food is plentiful and the beds much warmer than his tent, Bondrup-Nielsen continues his research to the great amusement of the cutting crew and camp staff. Taking the first photos of the owls, learning to differentiate between male and female calls, and observing mating behaviour, he finishes the season having located ten males on territories. In subsequent field seasons, Bondrup-Nielsen completes his graduate research. The book details his experimental tracking and recording methods, including telemetry, homemade traps, and a recording device fashioned out of an alarm clock, some tinfoil and a sewing needle.

Bondrup-Nielsen’s inquiring mind and passion for both winter and the outdoors bring an infectious sense of adventure to his fieldwork. His studies are punctuated by close encounters with coyotes, bears and a moose, glimpses of the Aurora Borealis, first love and self-discovery. With some of the author’s original journal entries, notes and sketches, A Sound Like Water Dripping captures the beginning of what continues to be a committed and inspiring dedication to the study of ecology.

“Owls seem to hold a fascination for just about everyone,” says Bondrup-Nielsen. “Maybe it’s their appearance: We see ourselves reflected in their faces. Their beaks resemble our noses and their big eyes, similar to ours, look forward, with eyelids that close from above, unlike other birds whose eyelids close from below. They seem to represent wisdom rather than reminding us of the fierce predators that they are. Owls also have ghost-like qualities, flying on silent wings, active mainly at night. In some cultures, owls are harbingers of death. In any case, there’s something magical about them. I studied the Boreal Owl in northern Ontario and Alberta from 1974 to 1976, and am still approached by naturalist societies with invitations to talk about this small northern owl so few people have ever seen. In my teaching, as well, when I get a chance to talk about my research on owls the whole class listens intently. Thus, after I had finished my first book, Winter on Diamond, I felt a longing for the solitary but exciting experience of disappearing into my head again, this time to relive my discovery of the Boreal Owl. ”

Soren Bondrup-Nielsen was a professor of biology at Acadia University where he taught ecology and conservation biology. He is also the author of three previous books, Winter On Diamond, A Sound Like Water Dripping: In Search of the Boreal Owl and Merging: Contemplations on Farming & Ecology from Horseback. He lives near Canning, Nova Scotia.

Other titles by Soren Bondrup-Nielsen