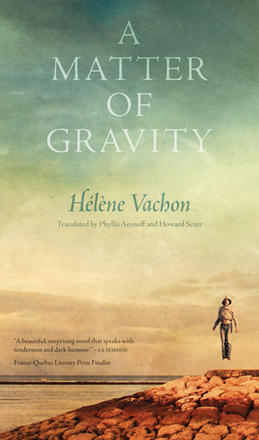 A Matter of Gravity

A Matter of Gravity

A Matter of Gravity is about the forces that draw two men together. Hermann, an embalmer and doctor’s son, devotes himself to the dead to mask his disappointment that, unlike his father, he cannot cure the ­living. Hu is an ailing pianist who dwells in memories of past glory. ... Read more

A Matter of Gravity is about the forces that draw two men together. Hermann, an embalmer and doctor’s son, devotes himself to the dead to mask his disappointment that, unlike his father, he cannot cure the ­living. Hu is an ailing pianist who dwells in memories of past glory. Hermann displaces his drive for perfection and order onto his elderly neighbours. Hu, ashamed of his lame, knobbed hands, rarely leaves his airless room. Hermann contends he is eternally separated from the world by a “permanent cushion of air” that keeps him wavering between two women and hovering above humanity. Hu is bound to a nightmarish reality, shuffling between emphysema, rheumatoid arthritis, and Parkinson’s disease.

When a mysterious manuscript, possibly written by one of Hermann’s centenarian neighbours, connects one man’s routine with the other’s, an extended afternoon at the park eventually leads back to Hu’s piano. This marks the beginning of the men’s tenuous relationship, which, while healing in nature, is made more fragile by the pianist’s heightened ­mortality.

A Matter of Gravity is a sensitive, delicate, and humorous novel that unfolds in liminal spaces: between life and death, youth and age, earth and sky. By the end of the final, transformative meeting between Hermann and Hu, Vachon gently broaches the question that paralyzes each man and the people whom they love: When faced with terminal ­illness, how do we embrace the unsatisfactory life we leave behind?

Allow me to introduce myself.
I am a man, forty-six years old. For those who may consider this description overly brief, I will add only this, since I don’t like to talk about myself: I am of average size and fat content, I travel little, preferably on foot, and I have a noisy heart. One last detail, and not the least: I am handsome, but only from the back. As if nature in a tragic moment of distraction got mixed up and confused front and back. One day when I was trying on a suit, I caught sight of myself in the three-part mirror of the store. For a moment, I didn’t recognize myself. From the back, I’m quite simply somebody, an observation that is both cheering and sad if you consider that it is impossible to live, as it were, on the wrong side, that there always comes a time when you have to turn around, and it is on such occasions that I go to pieces.

I live alone, except for two cats taken in one winter night when I was particularly cold. They walked right in and made themselves at home. I followed them in, closed the door and continued. We respect each other. They let me sleep till four in the morning, when I have to get up to feed them. They take up a lot of space in the bed, and I don’t, and in any case, I sleep on an angle. But it’s for women. I’ll come back to women. Things don’t come easy, it’s an extra you have to accept, you have no choice. They’re there with their bodies around and it’s very disturbing. Not counting the fact that you never know why they like you. Is it for your back? For your front? For your interior? Your exterior? For your upper body? Your lower body? Unless they like all of you, any old way, just as you are, without packaging. Anything is possible with them.

Or else it’s for the seed. It’s priceless these days. With the rain of deaths that’s flooding the planet, the loss of income that’s so depopulating and depressing that they have to clone the existing models, I sense a formidable reproductive frenzy among my female associates. I’m an only child and I was never taught to share. The idea of giving up a bit of myself distresses me. We spend our lives scattering ourselves. Sweat, tears, excrement, at a certain point everything deserts you and integrity is sorely tested.

“Full of insightful comments about existence and life and death and purpose and disappointment. … It’s almost like magic realism, but there’s nothing magic about it. Everything that happens could be real and true … And yet, there is a magicality in the story, a roughness around the edges of every new scene”
– Words on Pages

“A gem of a novel that is both grave and cheerful. We sense Boris Vian’s influence in the rollicking way the author deals with disease and tragedy, but the text carves its own path through constant innovation. [A Matter of Gravity] may well lead us to death’s door, but its main impact is to stir the blood in our veins. ”
– Voir

“A meditation on disease, death, and old age … [A Matter of Gravity] tackles these difficult issues with surprising grace. ”
– La Presse

“You take leave of this book with renewed joy in your heart. ”
– Jean Fugère

“A beautiful, surprising novel that speaks with tenderness and dark humour. ”
– La Semaine

Other titles by Hélène Vachon