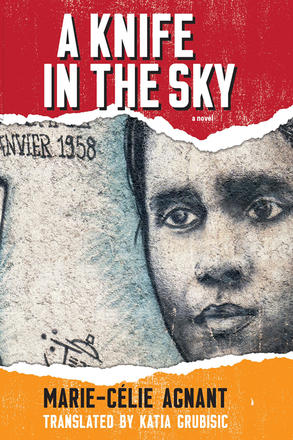 A Knife in the Sky

A Knife in the Sky

In A Knife in the Sky, a journalist's decision to talk and a student?s desire to know puts them in the crosshairs of a murderous dictatorship. As the novel opens, Mika is dangerously engaged in the pursuit of truth during Haiti?s first Duvalier regime. Nearly thirty years later, ... Read more

In A Knife in the Sky, a journalist's decision to talk and a student?s desire to know puts them in the crosshairs of a murderous dictatorship. As the novel opens, Mika is dangerously engaged in the pursuit of truth during Haiti?s first Duvalier regime. Nearly thirty years later, her granddaughter Junon witnesses the repressive dynasty?s unravelling. Brutal, terrifying, and hopeful, A Knife in the Sky is an homage to those who have survived tyranny.

Originally published by les éditions du remue-ménage in 2015 as Femmes au temps des carnassiers, this book, like most of the author?s oeuvre, is preoccupied with colonial imposition. Marie-Célie Agnant writes on the ruthlessness of a dictatorship, on humanity, and locates the strength and power of resistance in women.

"The work is shaped through a rich, crafted language that creates an acute awareness of what duvalierism was. This considerable effort is not a catharsis, nor an anamnesis; rather, it is the heart-rending testimony of the suffering, the inner struggles and the stand against Duvalierism of a woman caught in the midst of a regime that redefined the heights of horror. "
-Alain Saint-Victor, Potomitan

"Marie-Celie Agnant's work is noble: she names and narrates terrible emotions and chaos, yet always in a sensitive and poetic way. The fate of the women in her books is not sealed by the torment of their daily lives, but in the humanity of each one. Through these portraits of women-courageous women, women who are full of hope, even without underestimating the weight on their shoulders-Agnant shows us the pain they carry from one generation to the next. "
-Le Fil Rouge

"Breathless: that was the state in which I found myself in after reading Marie-Célie Agnant's work. This was the first time that I was speechless after reading a book. I am without words: the words to describe it, without the words to recount the story, the words to articulate what matters most. The essence of the book cannot be resolved in a sentence or summary. After finishing the novel, only the emotions remain, some more intense than others. Rage, powerlessness, anger, love, and friendship unfold, and coalesce into love, anger, and madness. In order to create this emotional amalgam, you have to have lived it, felt what the characters feel, you have to have experienced this tragedy-and above all, come out of it more alive, and stronger. ..Marie-Célie Agnant isn't just telling a story. She has become the interpreter of a voice, the living witness of a time, an era. Marie-Célie Agnant awakens memory and conscience. "
-Rachel Vorbe, Le Nouvelliste

Other titles by Katia Grubisic