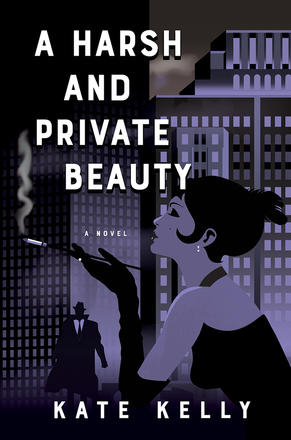 A Harsh and Private Beauty, is about the life and loves of Ruby Grace, now in her 89th year, on a train journey with her granddaughter back to Chicago, the city of her birth. When the book opens, Ruby is living in a retirement care home, but as a young woman, she was a jazz and ... Read more

A Harsh and Private Beauty, is about the life and loves of Ruby Grace, now in her 89th year, on a train journey with her granddaughter back to Chicago, the city of her birth. When the book opens, Ruby is living in a retirement care home, but as a young woman, she was a jazz and blues singer, once trained for a career in opera. The novel traces Ruby's grandparent's immigration from Ireland to New York City, her father, Daniel Kenny's life in 1920s Chicago--the era of gangsters, nightclubs, rum-running and Prohibition--and Ruby's subsequent life in Montreal and Toronto. Headstrong and talented, Ruby struggled with the conventions of the times, was trapped in a marriage that forced her to give up her singing career, and in love with another man who shares her passion for music. Now, on the train headed back to a city she cannot remember, to a daughter she hardly knows, Ruby tries to look honestly at herself and the choices she has made, choices that affected not only her children, but her grandchildren. Ruby has a stroke on route, leaving the disconnected story of her life and love in the hands of her granddaughter, Lisa, who must reveal a secret to her father, Ruby's son, that her grandmother guarded all her life.

Kate Kelly is an educator, singer/song writer, poet and now a novelist. A mother of three, she lives and works in Peterborough. Kate is also a spoken-word artist and has competed nationally in Toronto and Montreal. She can be found on Youtube, performing spoken word and a sample some of her writings are posted on her blog. A Harsh and Private Beauty is her debut novel.

"Kate Kelly's debut novel weaves the power of great storytelling with the elusiveness of memory and the revelation of secrets. Once a singer in bluesy jazz clubs, Ruby Grace, headstrong and independent, is now a grandmother to granddaughter Lisa. Her memories take her back to childhood, to her father Danny Grace and the larceny and dark dealings of 1920s Chicago, and eventually to the secret love of her life. She also fights her aging frailty with a stubbornness of spirit reminiscent of Hagar in The Stone Angel. Her courage, both as a young and old woman, is just what Lisa needs to find her own path in a rapidly changing world. Much of the narrative unfolds on a train journey, and this is a trip you won't want to miss. "
--Jan Rehner, author of Missing Matisse and Almost True

"Kate Kelly's A Harsh and Private Beauty transports us to a pulsing, teeming Chicago in the early twentieth century, as a family of Irish immigrants makes its way into the new world. Through her astute and nuanced observations of emotion and relationship, Kelly unravels the complicated threads that entwine a family and its collective and individual memories. As the voices of jazz greats haunt the text, the bold and compelling Ruby Grace and her family come to acknowledge the capricious nature of memory, and that even amid life's most extreme trials and hardships, beauty is ever-present. "
--Linda Quennec, author of Fishing for Birds

"This great family saga takes us from Chicago to Montreal and Toronto, from gangster wars in the Prohibition Era to the war of the sexes in the next generation. Family secrets are revealed, conventions (and hearts) are broken, and careers are forged in this fascinating tale told by the matriarch of the family, indomitable Ruby Grace. The story resonates with her granddaughter Lisa, who is at a cross-road in her own life, and it will resonate with readers everywhere. Bonus points if you love jazz and blues!"
--Erika Rummel, author of The Effects of Isolation on the Brain and The Painting on Auerberg's Wall